Art exhibitions are all about the money, nothing about the art, finds Griselda Heppel


Two weeks ago I went to the Gainsborough’s Family Album exhibition at the National Portrait Gallery, and if you have nothing to do in the next 2 days I urge you to catch it before it closes. (A fat lot of use giving you so little notice, I know. Sorry.)  If your only image of this marvellous 18th century painter is as a highly-skilled, flattering portraitist of wealthy aristocrats, you’ll be bowled over – as I was – by the exquisite tenderness, emotional depth and freshness he achieved in portrait after portrait of his two daughters, captured together at various stages of their lives. His love and fatherly protectiveness burst out of these paintings, making them some of the most beautiful and heartbreaking portraits ever painted.

Not that you’d know that from the exhibition’s curators. Reading Waldemar Januszczak’s perceptive review in the Sunday Times, I felt, with him, a familiar weariness at the snide, superficial tone that has spread like a canker throughout the museum and gallery world in the last few years. Art is no longer to be judged on its own merits; all that counts is the money the paintings represent. According to the curators, writes Januszczak, ‘at every step of his progress, Gainsborough used his family as cheap models to advertise his talents and try out different approaches …The pictures hung opposite each other in his grand new house, where their job was to impress visitors with first-hand examples.’

At this point I feel my forehead hit the palm of my hand.

Because I recognise this mean perspective. Visiting the National Trust’s Hardwick Hall a couple of years ago, I found the same narrative hammered home in every room. Bess of Hardwick had the lavish staircase built ‘to impress visitors with her power and wealth.’ Each piece of furniture had this function, as did all the paintings in the long gallery. It’s now a family joke with us that ‘Going to See Some Power and Wealth’ has become shorthand for visiting stately homes. Yes, rich people have always liked to show off; but no one buys an armchair just to Show Their Power and Wealth. Needing somewhere to sit might have something to do with it. Equally, many wealthy aristocrats were genuinely interested in art, fostering young painters and building up important collections for which we are all the richer. The founding collections of The National Galleries of England, Wales, Scotland and Ireland came from rich art enthusiasts who bought these paintings, not because they were expensive, but because they considered them beautiful.

We don’t have to read this tosh, I know. But I find it sad that visitors, including generations of schoolchildren, are being shortchanged and patronised in this way. The opportunity is there to spark interest – even a little – in the art around them; instead, they are encouraged to sneer at the art’s being there at all.

On a recent visit to Cardiff Castle – one of the most glorious examples of Gothic Revival architecture – the young guide told us next to nothing about the designers, painters, sculptors, wood carvers and others responsible for its craftsmanship, preferring instead to stress – repeatedly – the fabulous wealth of the 3rd Earl of Bute, how he and his family ‘had a pretty nice life, no worries at all.’

Now that kind of statement should ring alarm bells. It is in tune with the general Money = All That Matters narrative in current museum curation and cannot be the whole story. Sure enough, talking to some of the older, near-retirement guides gave a poignant picture of a loving husband and father creating a haven of beauty and warmth to ensure his family had the opposite of his own loveless childhood. Suffering from Bright’s disease all his life, in 1900 he died, aged only 58, of kidney failure. Fifteen years later, his son Ninian, 32, was killed at the Battle of Loos.


No worries at all? I think the Bute family had a few. 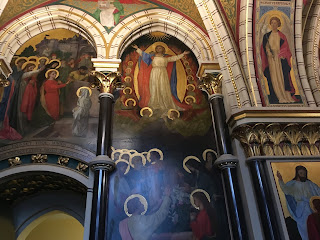 Do yourself a favour: go to exhibitions, galleries and beautiful houses, just don’t bother reading what the curators or guides have to say anymore. It’s sad that we’ve come to this.

Cecilia Peartree said…
Yes - as someone who works in an art gallery, I can tell you that the obsession with money has also permeated the whole organisation, although in fairness this is partly because of cuts to the financial support we get from the government etc. Much of the corporate information we receive revolves round real-world and digital visitor figures, and we always seem to be looking for funding for various projects. So it isn't entirely surprising (although disappointing) that this obsession seeps out on to the labels and into the information given on guided tours! I suppose in a way it is just a sign of the times, when financial worth is mistaken for intellectual, cultural or any other kind of value.
1 February 2019 at 12:50

Griselda Heppel said…
That's very interesting, Cecilia, I hadn't thought of that. Worrying about funding all the time must be depressing for the gallery staff and I suppose introduce a kind of world-weariness in attitude to the art on display. The trick is to try and capture the imagination of the visitor, nevertheless, and I feel that's more likely to happen by informing them enthusiastically than by being cynical (and in the case of the NT, downright patronising!).
1 February 2019 at 18:22