The Golden Horsemen of Baghdad - reviewed by Katherine Roberts 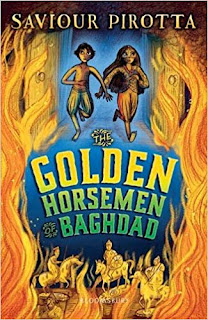 When I first saw the cover of this book, I knew I had to read it! The gorgeous orange flames, the mysterious golden horses, and the intriguing title all speak of an exotic historical setting, and possibly a bit of magic, too. As it turns out, this is historical fiction rather than fantasy, but Saviour Pirotta weaves a rich tale that brings the ancient city of Baghdad and its unfamiliar (to me) culture alive in a way that should appeal to both sets of readers.

The horsemen of the title are part of the elaborate mechanism of a water clock presented by the caliph of Baghdad Harun-al-Rashid (he of the Thousand and One Nights fame) to the Emperor Charlemagne in the eighth century. There were twelve horsemen altogether, carved out of wood and gilded, which appeared through little doors to mark the hours. But who made this fabulous clock, and whose hand carved the horsemen?

Meet young Jabir, whose father - a night fisherman on the River Tigris - has drowned in mysterious circumstances, leaving Jabir as head of the family to care for his mother and sisters.  Unfortunately, Jabir is not as good a fisherman as his father, and his skill at whittling toy animals for his younger sisters is not enough to feed the family or pay the rent when the landlord comes knocking. So Jabir sets out for Baghdad to look for work, where he is at first arrested for stealing food but then comes to the attention of the clock-maker whose task it is to fashion the famous clock that the caliph will present to the Emperor.


Together with the clock-maker's daughter Yasmina, whose sketches of the horsemen act as a guide for Jabir's work, Saviour Pirotta's young hero whittles night and day to have all twelve horsemen ready in time - only to see his hard work destroyed when the evil landlord tries to stop him from saving his family.

Rich with historical atmosphere, yet economically told, this story should both interest and excite younger readers. I could almost smell and taste the streets of eighth century Baghdad, and see the stars in the desert where Jabir seeks help from his mother's people. Saviour Pirotta is an experienced author for children and has written that rare item: an adventure story that also educates, although (as appropriate for this age group) the historical detail does not overpower the book and leaves the reader wanting more... did you know, for example, that there is such a thing as beauty contests for camels?

More details can be found on Saviour Pirotta's  website https://www.spirotta.com/books-the-golden-horsemen/

Interested readers can discover more about Charlemagne's water clock and other fantastic clocks of the Islamic golden age here:
http://muslimheritage.com/article/clocks

*
Katherine Roberts is an award-winning author of fantasy and historical fiction for young (and older) readers. See more about her work at www.katherineroberts.co.uk
Charlemagne Golden Horsemen of Baghdad Katherine Roberts Saviour Pirotta Thousand and One Nights water clocks

Umberto Tosi said…
I must read this book! Thank you, Katherine for another intriguing post. I'm wondering how much Charlemagne's Baghdad, Golden Horsemen clock and others of the 8th century Islamic golden age contrigued to the crafting of the magnificent, ornate Prague Astronomical Clock (or "Prague Orlo"j installed in 1400CE. It is still running! BTW - The Prague Orloj figures in my picaresque, historical novel, Ophelia Rising, in which the re-imagined fair maid finds herself a fugitive in Emperor Rudolf the Second's 16th century Prague.