Thanks to Theresa May and her cronies, there will soon be a great revival in cooking cheap and nutritious meals, possibly over open fires of hedgerow twigs and dried dung.


So I present some useful recipes from the Sterkarm cook-book.

Take two and three quarter cups of sour cream, and simmer in a closed pan for about fifteen minutes.

Maybe you have some sour cream because the electricity is off again. If you haven't, milk or half water and half milk will do.

While your cream is simmering, take one and a quarter cups  of oat-flour.  This can be pin-head oatmeal, or porridge oats ground very fine.

Sieve about a third of the flour into the cream and continue simmering until the butter-fat begins to separate.  Skim off the fat, and save it in a bowl.


Sift the remaining flour into the pan, and bring to the boil.  Then simmer until it is the desired thickness.  Whisk to make smooth.  Add salt to taste.
To serve, take the fat you skimmed off earlier and pour over the groats. Accompany with raw dried meat, such as smoked ham or lamb, or tongue, or dried fish.
Or whatever you have. A filling dish.
We'll have to learn to eat all of an animal, not just the muscle meat, so here's how you make a hearty, nourishing meat pudding.
Take the stomach, liver, heart and lungsof a sheep.

Start preparing this dish at least a day before you need it because first you must clean the stomach well, emptying it of what the animal was last keeping in it, and washing it out. Soak it overnight.

In the morning, turn the stomach inside out, and boil it for one and a half hours in good stock. Make sure that the weasand -- that it, the windpipe -- hangs over the edge of the pot, to allow drainage.

While the belly-bag is boiling, slap the heart and lungs on a table-top or large chopping board, and mince them with a big knife.

Get hold of the liver and chop up half of it. (The other half isn’t needed for the pudding, so save it for another meal.

Chop up the onions and the beef lard.

In a large crock or tub, mix together the chopped heart, lungs, liver, lard, onions and oatmeal. Season well with salt. Add sage, thyme and parsley, if liked. They will have been grown by Isobel, or gathered wild, and may be either fresh or dried.

Take some of the water the belly was boiled in, and add enough to the mixture to make it a little watery.  Put the belly-bag in another bowl, to support it, with the opening at the top. Fill it with the mixture of oatmeal and offal until it’s half-full.

Squeeze out the air, and sew it up with thread.

Put it back into the boiling stock, top up with water, and boil for three hours, without a lid. Don’t let it boil dry, and if the stomach starts blowing up, prick it with a needle.

Serve with whatever vegetables you have -- boil them in the same pot. Turnip or carrot greens, maybe.

'Give Us A Happy Ending And Don't Hurt The Dogs .'
On The Writing Of The Third Sterkarm Book
https://theportalist.com/susan-price-the-sterkarm-handshake 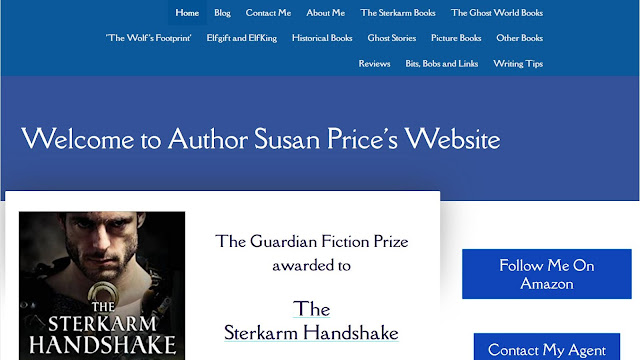 Umberto Tosi said…
Have you thought about opening a Brexit Breakfast House? OMG! It certainly woudl feature hearty fare - both in writing and food. I did a bit of deep reading about 16th century cuisine when I wrote "Ophelia Rising," - mostly about the extraordinary weeklong wedding and other feasts put on in lavish displays of largesse by Renaissance princes when their minions and peasants got to quit working, dance and stuff themselves on towering food creations that could be called sculpture beyond victuals. Anyway, congratualtions on The Sterkarm Handshake!
25 March 2019 at 10:13

Sandra Horn said…
I'm laughing- wryly, if that's possible - instead of putting my head in my hands and groaning about the horrendous Brexit mess we're all in, so thank you Sue and the Sterkarms for this. I'll take a raincheck on an in vitation to breakfast, though.
25 March 2019 at 15:03

Bill Kirton said…
As someone who (shamelessly, I admit) relies entirely on my wife for all things related to gastronomy, I found this a fascinating and certainly entertaining article, and await with no little impatience the publication of the full Sterkarm Cookery Book (in case she eventually sees through me, you understand). Thanks, Susan.
25 March 2019 at 17:27

Katherine Roberts said…
Brilliant! I also like the idea of a Sterkarm Cookery Book. I once did a post for a blog called 'But What Are They Eating?' (with mermaid eggs, etc). Will try posting the link here in case you want to spread the Sterkarm fare more widely: https://bookfare.blogspot.com/
26 March 2019 at 16:44