Not quite Route 66: the Great North Road - by Alex Marchant 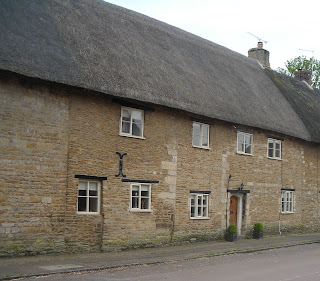 Name after name recall events to my mind as I drive down that long road, and as I watch the changing styles of buildings that I pass, and the changing colours of stone and brick. But there’s always one that I look out for. Its coming is foreshadowed by the first houses and inns in the local honey-coloured stone. Past Stamford, past the RAF base at Wittering with its lurking Harrier jet, and past the signs for Peterborough and Leicester (‘avoiding low bridges’). It’s the turn-off for Fotheringhay, and all that remains of the castle where King Richard was born in 1452. His parents lie in tombs in the beautiful church there – reburied by their great-great-granddaughter Elizabeth I after their original tombs were destroyed by her father during the Dissolution of the monasteries – and a colourful stained-glass window commemorates Richard himself.
One further commemoration – of a sort – exists there. Totally unplanned. I discovered it on my first visit to Fotheringhay on my way down from the north. The turn-off from the A1 is at a tiny place called Wansford. Is it just a coincidence that, months before – before I even knew that place existed – I had given my main protagonist the name Matthew Wansford? He was named after the first recorded printer in the city of York – Frederick Wansford in the early 1500s, who makes an appearance in my books as Matthew’s elder brother. Given the millions of feet that must have tramped north and south on that Great Road, I guess it’s entirely possible that the original Master Wansford – or his forebears – lived in this small Northamptonshire village before making his way north to the country’s second city to make his fortune in the exciting new book industry.

Alex is author of two books telling the story of the real King Richard III for children aged 10+, and editor of Grant Me the Carving of My Name, an anthology of short fiction inspired by the king, sold in support of Scoliosis Association UK (SAUK). A further anthology, Right Trusty and Well Beloved..., is planned for later this year and submissions are welcomed from published and unpublished authors. Details can be found at https://alexmarchantblog.wordpress.com/2019/02/24/call-for-submissions-to-new-richardiii-anthology/ Deadline 19 May 2019.

Sandra Horn said…
Wow! What a great post - conjuring a story from travelling a familiar road and making it intriguing and exciting. Thank you, Alex!
13 March 2019 at 09:59

Bill Kirton said…
I echo Sandra's appreciation of a great post, Alex, but...
OK, I don't have your comprehensive knowledge of history and the various associations between events and locations, but it's more than that which divides us when it comes to appreciating the A1. The weekend before last, I drove from Aberdeen to Sunderland to spend what turned out to be an idyllic weekend with my 2 brothers in our Dad's city, watching his team beat our team in the wonderful Stadium of Light.

Living in Aberdeen necessarily involves long drives when visiting family and friends, most of whom are in Devon. My 3 (middle-aged) 'kids' and their kids are in Glasgow (3 hours), London and Brighton (an eternity). But I'm so grateful for the M6 and all the other Ms I take en route (even the M25). That awful crawl down the (2-way traffic) A1 last week was purgatory. Sorry.

Susan Price said…
I'm like Bill -- I appreciate the romance of 'The Great North Road' but never use it. We often travel to Edinburgh and beyond but always go up the M6 (nothing sterile about the scenery as it passes through the Lake District) and then cut across from West Scotland to the East. It's about 6 hours to the Kingdom of Fife. Ten to Oban (if you start a sparrow fart to avoid traffic.)

The Great North Road is far better than Route 66! It was a Roman Road, Harald Godwinsson marched up it and -- my favourite -- the news of Elizabeth I's death was carried up it by a man riding post. The Royal Post had 'posts' at intervals all up the road, where a horse was kept saddled and bridled, day and night. Urgent news was carried by a rider who leaped from one horse and onto another every twenty miles. The news reached James VI of Scotland in three days -- he was now James One and Six, of England and Scotland.
13 March 2019 at 12:32

Penny Dolan said…
I often travel what's now the A1M from Yorkshire and love the names of the places we pass as we hurry down to visit relatives in London or wearily and urgently, back home again. So often I've wondered about making the trip a slower journey, with a couple of overnights in there, so I can visit all the historic "names".

I'd also like to have a route or map of the Old North Road, as the A1M has so many new stretches and by-passes that following the original route is not a simaple task.

One of Hitler's mistakes, I once heard, was in not bombing the bridge over the Don at Doncaster as this one crossing strike would have taken out road, rail and waterway routes all in one go. (This was also an explanation behind the dreadful city traffic jams, too.)

Alex Marchant said…
Thank you everyone for your kind comments. I have to admit to not yet driving north of Scotch Corner on the A1 so can't comment on the stretches above there. My partner used to drive us that way en route to work/friends in Scotland many years ago, but more recently we've taken the M6 route - the countryside along which I totally agree is far from sterile. (I really only mentioned 'sterility' with regard to the M1 - the inorganic development of the route meaning it's now flanked by out-of-town sites, rather than the historic towns themselves (fortunately), although some of the countryside is lovely - albeit not on the magnitude of the northern M6.)
Interestingly, Susan, I believe the post-horse system from Scotland to London/Westminster that you mention was instituted by Richard when Duke of Gloucester, to take news from the war down to his brother Edward IV, when the latter didn't quite make it up their to lead his army himself. I use the first part of it in 'The King's Man', when my young characters need to travel swiftly after the battle of Bosworth....
18 March 2019 at 13:25