I suppose it's a good idea to take a short break from writing from time to time, re-charge batteries and so on. Unfortunately, in my experience other things just rush in to fill up the space usually taken up by writing -- if I could work out what the scientific analogy for this was, I would cite it at this point. I suppose it has something to do with a vacuum. Unfortunately it's some time since I learned any basic science, although I am a sucker for popular science stories in newspapers and online, and despite most of my knowledge of dinosaurs being based on the 'Jurassic Park' movie franchise, I was fascinated recently to read about a man who has apparently worked out the exact sequence of events during the meteor strike that killed the dinosaurs.

I wonder if it's better to carry on, always having a writing project in hand, just as I always have to have at least three unread books on my Kindle in case I become bored with one of them or want to read something in a different genre. In pre-Kindle days I had to take at least three real-life books on holiday with me, and I usually took advantage of any special offers in the local bookshops to stock up, choosing the ones that looked like the best value, i.e. long and complex. Even then, being a fast reader, I almost always had to read all the books others in the family had brought with them, which was how I came to be reading 'Harry Potter and the Philosopher's Stone' in the cabin as my older son drove our hired narrow-boat through the rather scary (in my opinion) Harecastle Tunnel on the Trent and Mersey Canal.

I haven't had a very long breathing space this time, having published the second in a short series of historical novels a couple of weeks ago and the 18th in my mystery series a couple of weeks before that. But after having both of them sitting unfinished on my computer for two months, I got that empty feeling once they were both out there making their own way in the world.

There was no excuse, either, not to tackle the de-cluttering or gardening mountains, or write up the community centre minutes, or get in touch with the kitchen floor people. Not that I've actually done any of these things during the breathing space. Oh, no. I've started to plan a short holiday in York to coincide with the Shakespearean season at the Rose Theatre there - highly recommended, by the way. We saw 'A Midsummer Night's Dream' there last summer and plan to go to 'The Tempest' this time. 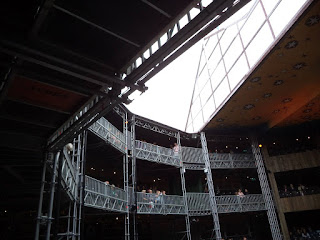 Also, I had promised in a weak moment to write a short story for a crime authors and readers Facebook group, which was due to be posted there today. And now my so-called breathing space is almost over again, because I am taking advantage of July's Camp NaNoWriMo to start on the 19th in the mystery series.

I suppose, to use another analogy that probably doesn't make sense, if my writing mojo actually is battery-operated, then the battery in question is more like the kind you get in a car, which charges itself up as the car goes along. Until the battery wears out altogether, of course. But I'm trying not to think about that!

Posted by Cecilia Peartree at 00:00

I love your idea of a breathing space from writing! Sounds to me like someone going on a diet who swears they’ve eaten nothing all day except for the usual meals, of course, and elevenses, and a little something at tea-time, with a final mouthful before bed... Except that your work production when you’re meant to be taking a breather is the very opposite of such self-indulgence. Respect!

Haha, yes, I do that with diets too!

It's a dilemma for me: Sometimes I need a break to recharge my writing "batteries" (to borrow your metaphor), yet the longer I stay away from the keyboard the more difficult it becomes to start my engine (to continue with the automobile analogy). I try to vary my ongoing projects - and switch to an "easier" short story to keep my fingers - and imagination - engaged while I set aside my longer work. Switching metaphors, It seems that my writing self is a shark. It must swim to live. Excellent post, Cecilia! Thanks.

I'd love to take a break, but no sooner is one book published then I start on the next project. It's not fear of the ideas drying up, simply the fact that one day I will run out of time and there are still so many stories bursting to be told.
I also find I'm happier and more contented if I'm in the middle of writing something. The marketing might freak me out, but the process of sitting down and letting the story flow is magic.
It's keeping the balance between that and the rest of my life that is hard.