Warning lights at the National Theatre by Griselda Heppel

Half-way through last month, an announcement came from Rufus Norris, director of the National Theatre (The Times, 14th June), that sent my heart into freefall. No longer would the Theatre put on “fairly straight adaptations” of European classics, as it seemed these only appealed to ‘theatre aficionados’ (people who go to the theatre?). Instead, historic plays would be remodelled to appeal to a ‘broad audience’ (ie the general public) who apparently have demanded that, for instance:

Really? The general public has demanded this? How does Norris know?

It all started with the huge success of One Man Two Guv’nors (2011), a new version of Goldoni’s The Servant of Two Masters, created by Richard Bean. The 1746 farce had to be rewritten as no one found its quickfire humour funny anymore (actually, they do), and slowing the pace to a standstill to allow James Corden’s character to ‘improvise’ ad nauseam about sandwiches was apparently much funnier (it wasn’t).

But the production proved a hit, encouraging the NT to ‘update’ other classics: turning Jim Hawkins, the hero of Treasure Island, into a girl, and creating a Christmas show called The Light Princess which, while grudgingly crediting the Victorian writer George MacDonald for the original idea, ended up telling a different story altogether.

Gradually, over the last few years, new season’s brochures began to describe more and more plays as ‘a reimagining of....’ (a warning light if ever there was one). Meanwhile wonderful, traditional productions of ‘unimproved’ plays like Hedda Gabler, She Stoops to Conquer, Man and Superman and several by Terence Rattigan gave reassurance that, while a few might get the ‘updating’ treatment, the classics in general were safe with the National Theatre.

Not anymore. From now on, we can’t be sure that, for any famous theatre piece put on at the NT, the words spoken are actually what the playwright wrote. Norris has effectively given the NT leave to update all plays, taking into account the sensibilities of our current age.

To be fair, he’s not alone in this. For its 2018 Christmas Show, the Royal Shakespeare Company put on A Christmas Carol, ‘adapted’ by David Edgar; and in his current production of A Midsummer Night’s Dream at the Bridge Theatre, Nick Hytner has swapped Titania’s and Oberon’s lines, thereby making Oberon lovesick for Bottom the Weaver. Ye gods.

The funny thing is, we’ve been here before. Nahum Tate, anyone? The 17th century poet and dramatist is now chiefly remembered for his excruciating ‘improvement’ of Shakespeare’s King Lear. Deeming the tragedy too harsh, he rewrote it to provide a happy ending, with Lear restored to life and health and Cordelia marrying Edgar, who exults that ‘truth and virtue shall at last succeed.’ We laugh about it now; but because Tate’s The History of King Lear (1681) suited the sentimental mood that blighted drama for much of the following century, it chased Shakespeare’s play off the stage for – wait for it – more than 150 years. Not until 1845 was King Lear performed again in its original Shakespeare text. 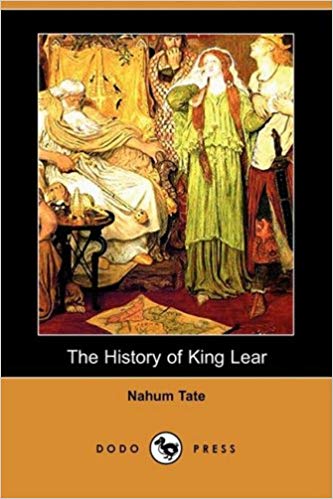 By chopping and changing plays written generations ago to suit the sensibilities of our age, these directors and writers are doing nothing new. Whether they’ll wish to go down in theatre history as so many 21st century’s Nahum Tates is another matter.

I agree wholeheartedly "updates" of the classics usually turn out to be ersatz versions as far from the originals as powdered coffee is from fresh roasted. I wrote a novel about Ophelia, but I was careful to tell her story as another, imagined life, far removed from Shakespeare's play, avoiding any hint of "updating," or otherwise revising that which is in no need of alternatives, other than in costume and set choices.

Yes - this is a particular bugbear of mine too. I have a season ticket to a theatre near us, but I did think twice about renewing it for the next season when I read in their advance publicity that they were going to be doing a 'different' version of 'Pride and Prejudice'. This is particularly worrying because last season we saw an almost completely mangled version of 'Twelfth Night' there - admittedly this isn't my favourite Shakespeare play but it was almost unrecognisable, being framed by a rowdy Edwardian house party and with so much cross-dressing and gender-bending going on that I more or less lost track of who the characters were meant to be.The only one that still made sense was Malvolio.
On the other hand, they do very well indeed with many of the little-known plays they put on, and I was completely gripped by a brilliant production of 'Touching the Void' a few months ago, so maybe it is worth it for these.

Er... Sorry but, while not on the side of the demons, I'd beg a little latitude for them. Yes, I deplore those distortions designed specifically to provoke or to cater for 'contemporary' obsessions, but my own experience makes me a wee bit more tolerant of some 'adaptations'.
Several years ago, I was invited to the University of Rhode Island as a visiting prof and part of the deal was that I provide translations of 3 Molière plays of my choice. They'd be performed by students of the drama department and I was to direct one of them myself. I chose 3 very different plays - a farce, a prose comedy of manners and a verse comedy.
As you probably know, unlike Shakespeare's, Molière's comedies are still funny so there was little need to 'update' his gags. However, the director of the prose comedy, (Les Précieuses Ridicules, which satirises pretentiousness in taste and language) realised that it would have more impact (and get bigger laughs) if she set it in contemporary Providence (Rhode Island’s capital) and made its characters members of a specific social layer renowned for their intellectually aspirational clumsiness. This required altering some of my translations by using a terminology which clearly identified its targets and the comedy was more relevant, and funnier, as a result. So mea culpa, but unashamedly so.

Bill, I'd love to read a blog by you telling us more about that experience!

I think I have to side with Bill here -- I've no doubt there have been some dreadful updates, but everything can be done well or done badly. Take the film Clueless, a clever, witty updating of Jane Austen's 'Emma' to an American High School.

But even so... Decades ago, I went to see the Birmingham Rep's Christmas Show. That year it was 'The Servant of Two Masters.' It was brilliant, funny and much enjoyed by the audience. Full house. No updating: just translation.

Ha ha well if m glad to have stirred up so much discussion! Thank you all. I’m not actually against a modicum of updating; giving the odd contemporary witty reference can definitely heighten the comedy,as Bill’s translations of Moliere prove. My point is that the audience can spot that easily, enjoying the in jokes for what they are, while the essence of what the original playwright wrote remains intact. I’m more worried about the danger of classics being so messed about as to be unrecognizable - as Cecilia has found in her local theatre - and the original becomes lost to audiences, as King Lear was for 150 years.

Using classic stories as inspiration to write a witty, modern version of the same themes is a different matter because you’re writing a new story, in your language and with your ideas (like Umberto, I’ve done this myself, with children’s books based on Dante’s Inferno and the Faust legend). Some readers will,recognise references to the great work inspiring it; others won’t and will just enjoy the story for itself. I loved Clueless and Tamara Drew; spotting Jane Austen’s Emma behind the first and Thomas Hardy’s Far From the Madding Crowd behind the second added to the fun but the films stood up by themselves.

And Bill - WHAT was that you said? Shakespeare’s comedies no longer funny? the rude mechanicals play in Misummer Night’s Dream, the hilarious confusion of the Comedy of Errors, Dogberry in Much Ado About Nothing wishing to confer all his tediousness on to the Prince, the laundry basket in the Merry Wives of Windsor - do none of these raise a ghost of a smile? Capons at Dawn it is!

Sorry, Griselda, I should have qualified my curt dismissal of Shakespeare’s ‘comic’ characters by stressing that it was definitely a subjective judgement (and a broad value judgement at that). As a spectator, I’ve always been aware of the efforts actors have had to make to overcome the often leaden, repetitive, punning nature of the actual dialogue. My most recent experience of that was the excellent Sandy Grierson as Touchstone in the RSC’s current production of 'As You Like It' in Stratford. The character is (like most of Shakespeare’s fools) wiser than most of those around him but to get the laughs his role demands, Sandy played him as an archetypal Glaswegian stand-up, with all the body language, facial contortions, faux-innocence and underlying savvy that implies. And he was very funny.