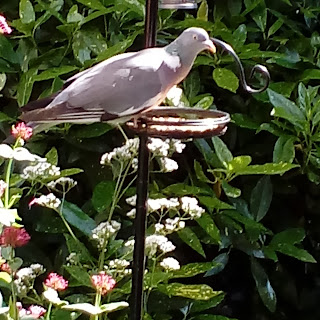 Like many people we feed the birds in our garden and we have a resident pair of wood pigeons.  Bold creatures who barely bother to flap a few feet up into the tress when you pass by.  Today for example, having out some fresh supplies in the feeders I pass within feet of this cheeky bird four or five times, almost close enough to touch it.

When I was growing up on the farm in Sussex pigeons my father generally saw pigeon as, at best, a tasty meal or worse as a darned nuisance. They didn't just eat the farm crops but also his precious garden veg; especially the brassicas, which, ironically, were a splendid accompaniment to pigeon pie.

Not that we ate pigeon often. they are bony and fiddly to prepare and not nearly as easy to procure as rabbits or even pheasants. I can say this now, as Father is long gone, but throughout his years as shepherd and farm hand Pop was also a prodigious poacher; augmenting the low wages of a farm labourer in those times with free meals to go with all those veg from the garden.  (Fictionalised in my nostalgic novel Sussex Tales : Amazon US / UK.)

I spoke recently about how smell is often a key to memory and a useful tool in a writer's toolkit.  But sound is as emotive if not more. The distant cooing of pigeons in the coppice across the field from where we lived was a constant backdrop, mostly it reminds me of long summer days laying in the grass with a good book. But also of cold winter walks when the ground is hard with frost and the trees bare. Its a melancholy sound, that can make you feel so very sad, raising goosebumps with its soft, drawn out calls. Yet, at the same time, for me at least, it was also a comforting note, in some odd fashion.

Father may have cursed them, and Mother hated cooking them, but for me they are a handsome reminder in sound and vision that the world is not all bad. It was pigeons which sprang to mind in the opening chapters of Winter Downs, my first Bunch Courtney, along with the a flurry of rooks calling from the tree tops. Pigeons were a staple food stuff during the war years in which these books take place and the Courtney sisters muse on the delights of pigeon cooked with pears and ginger.
For me, however it is the sound of pigeons and rooks and the distant call of the sheep that conjure my childhood.

julia jones said…
and as I read this I'm listening to one croo-crooing outside the window. You are right, it's one of the most deeply characteristic sounds of the Eng countryside. Lovely to bring it forward from the background and actually listen for a moment. Thank you
19 July 2019 at 08:21

Susan Price said…
I love my 'woodies' too. My Dad taught me that their call is, 'You fool you, you fool you,' and now I can't hear it as anything else.

My wood pigeons seem to have a very different character from yours, though, Jan. They are probably the most cowardly of the birds to visit my garden. At the slightest movement or sound, they're off, their wings going 'Whop, whop, whop.' (And I always know when they arrive because of the crash as they thump onto the fence.)

Bill Kirton said…
Sorry, but I'm going to bring a discordant note. I accept the validity of what's being said about the nostalgia, the mood evocation, the seasonal associations of their calls, but I find their refusal to 'complete' the last line of their 3-note song unsettling. The ones around here all repeat the 3-note call a few times, then sing the first note again and give up. (It was the same in the garden in Exeter where I lived before.) It's as if they're thinking, 'OK, I'm a bird, I'm supposed to sing', so they repeat a perfunctory few notes but are then distracted and find some other birdy thing to do. Sorry. Ignore me.
19 July 2019 at 11:13

Damyanti Biswas said…
I think of pigeons in urban settings--and their cooing on the eaves in summer. You're right that they can be so evocative!
19 July 2019 at 11:21

janedwards said…
Thank you for your comments :-) Interesting that something we generally don't notice can evoke so many emotions when we do stop to listen.

Bill - I get how annoying their amnesiac quality can be! I had a cockatiel who frequently whistled the lines of Pop Goes the Weasel in the wrong order - or broke off mid line and started again. It drove me must at times
19 July 2019 at 13:25

Umberto Tosi said…
I was delighted to read your lovely reminiscence and tribute to the lowly pigeon. I love their cooing too, be they redoubtable urban-dwelling rock pigeons or their more poetic cousins - your wood pigeons or the mourning doves who come to feast on the mulberries from our backyard tree in summer.
19 July 2019 at 18:20