Dystopias have become a major part of fiction over the last few decades, and with our current awareness of the state of the planet are unlikely to go out of fashion. It is, of course, much easier to write a dystopia than it is to write a utopia, because we all have such different ideas about what, exactly, constitutes a perfect world. Imperfect worlds are all around us, and scientific predictions about what the next century will bring are terrifying. An abbreviated definition from Wikipedia reads:

A dystopia is a community or society that is undesirable or frightening. It is translated as “not-good place” and is an antonym of  utopia, a term that was coined by Sir Thomas More and figures as the title of his best known work, Utopia, published 1516, a blueprint for an ideal society with minimal crime, violence and poverty. Dystopias are often characterised by dehumanisation, tyrannical governments, environmental disaster, or other characteristics associated with a cataclysmic decline in society. 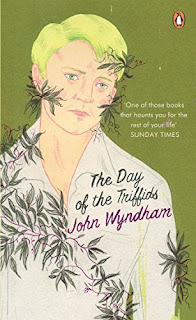 I think John Wyndham was one of the best dystopian writers, as he had so many original ideas about the way society could collapse. The Day of the Triffids uses genetic engineering combined with an atmospheric accident to bring about disaster. The Chrysalids is a post nuclear war scenario, with a repressive religion attempting to suppress mutations. Web considers what would happen if spiders developed a collective intelligence, as they are one of the most abundant forms of animal life around. The Midwich Cuckoos postulates what might happen if aliens impregnated the entire female population of a small village. These scenarios only work historically, as our communication systems are far more sophisticated these days. But the same situation arises again and again – what happens when these systems break down? We are so much more reliant on them now than we were in the nineteen sixties, when Wyndham was writing.
There are a lot of good books available that were written more recently, and surely the most depressing of all is The Road, by Cormack McCarthy. 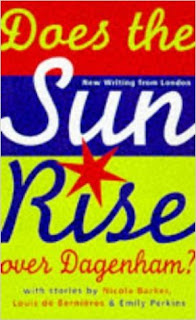 I think the only truly dystopian thing I’ve written is a short story called Retrospective, which was a winner of the New London Writing Award, and was published by Fourth Estate in 1998 in a book called Does the Sun Rise over Dagenham? It’s set in a London of the near future, and was a dig at the art world, amongst other things. When it was written it significantly predated Damian Hirst’s Shark and Chris Ofili’s elephant dung . This is an extract:

We humans deal with investments here. Buying and selling really modern works of art, and making a tidy proﬁt in the process. We’ve got quite a few of the big names – Tadeusz Twardowski, who paints with body fluids; Roland Spickett, the one who uses microscopes and bacteria, and Donald Barnes. Donald Barnes was the really big money-spinner with his series on toenail clippings, and the fact that he’d died of a heart attack the previous week had made him worth considerably more. Cranford Smith (my employer) always held back plenty of pieces in the warehouse so that he could make a killing after a death. Sound economic sense, really. All his artists had to agree to it, and also not to store more than a certain number of works themselves – it would never do for the relatives to ﬂood the market straight after the funeral. Cranford would let the pieces appear gradually, so that the price never suffered. The man had made a fortune, which was why he could afford to indulge in his other little interest, computers. We didn’t really need Jennifer, although there were obvious advantages to some of her applications. The hologramatic representations were going to be very useful for showing clients large sculptural pieces, particularly if they hadn’t actually been constructed. You could make a maquette look twenty times its real size and site it straddled across the Thames if you chose to.
I loaded up Toenail Clipping number 43 with London Clay to see what it looked like. It was a remarkably faithful portrayal, with the little twist at the end of the clipping smeared with grey. The Third World ones have sold the best, with the one encrusted with oil-soaked sand fetching a quarter of a million. ‘This tragic reconstruction of human debris is a powerful comment on the sharp practice employed by the shoe industry in under-developed countries’, was what one leading newspaper had said, and although a rival paper had come back with ‘Donald ducks the issue’, the ﬁrst observation stuck. Donald became known as an extremely serious exponent of the New Organic School of painting, and his prices rocketed.

The story itself revolves around a portfolio of some hitherto unknown sketches, which in the end turn out to be what Donald Barnes painted in private – detailed watercolours of landscapes, which was what really interested him. But the London setting I described was definitely dystopian:

It was a surprisingly still morning for October. There was one of those acidic mists hanging about that made you take your pollution mask just in case. I kept it hidden because clogs (the homeless in the story) can’t afford masks, and I was going to have to pretend to be one. I got myself a set of clothes at a second-hand shop. I believe they were once called charity shops for a while, until people stopped giving them their cast-offs and started selling them again, just like they used to.
I wore a pair of jeans and a dufﬂe coat. I didn’t shave, and I blackened my nails with some earth from a potted plant. There wasn’t much I could do about the slight paunch I’d developed recently, but after all, anyone can become a clog, all you have to do is to make a few wrong decisions and there’s your expensive education down the plug hole.
I started with the shacks in Priory Park, because I didn’t want Cranford glancing out of the window and spotting me. The clogs had got a ﬁre going in the middle of the old fountain — there’s never been any water in it during my lifetime and it worked rather well, blazing up out of a giant stone shell and illuminating the cherub that was trying in vain to quench it with part of its anatomy. There was a group of them sitting round it, sharing a cigarette and coughing every so often in a companionable sort of way. I hovered for a while until one of them noticed me.
‘You’re new, aren’t you.’
I nodded.
‘Made redundant?’
I nodded again.
‘You actually had a job?’ The clog pushed back its hood, and I realised that I was talking to a girl.

And I’ll end with a final Wikipedia quote:

In recent years there has seen a surge of popular dystopian young adult literature and blockbuster films. Theo James, actor in Divergent, notes that “young people in particular have such a fascination with this kind of story”, saying “It's becoming part of the consciousness. You grow up in a world where it’s part of the conversation all the time – the statistics of our planet warming up. The environment is changing. The weather is different. There are things that are very visceral and very obvious, and they make you question the future and how we will survive. It’s so much a part of everyday life that young people inevitably — consciously or not — are questioning their futures and how the Earth will be. Some say that “it is easier to imagine the end of the world than it is to imagine the end of capitalism.”

I fear you're right, Umberto. And your last comment is true in so many different ways, to quote Santayana: Those who cannot remember the past are condemned to repeat it.
The problem today is that we may not have a future for remembering the past. And I think the earlierpost got there by mistake...