A Feasting of Trolls -- by Susan Price

Of all the books I've republished as ebooks and POD paperbacks, my best seller, by a long way, is The Wolf's Footprint. I have no idea why but month after month it outsells all my other titles by 100 copies and more.

Since it's written for the 8-10 age-group, I decided that it would make sense to re-publish all my other titles that were published for that age-group. I've just added another: A Feasting of Trolls.

A Feasting of Trolls was originally published by A&C Black in 1990. They commissioned it for their Comets series and since I had to come up with a story in a short time I turned, as usual, to folklore. There are several old legends about supernatural home-invasions at Christmas or the New Year and I took bits I liked from different ones to make an original story. It has a little of 'The New Year Visitors,' a pinch of 'King of Cats,' a smattering of tales about mortals being taken into Elf-land and added sinister witch (male).

Ivar lives on a farm with his two older brothers and two older sisters. He is the spoiled youngest, indulged by all the others, sent to play while they work.

Ivar takes all this for granted but, as he grows older, there are some things that puzzle him. For one, he's always sent away to stay with his uncle and aunt at Christmas while the older four remain at home. For another thing, when he leaves for his uncle's, there's always plenty of food in store at home. His brothers and sisters have worked all year to make sure there is. Yet when he returns after Christmas, most of that food has vanished and they're all on short-rations for the rest of the year.

Why does he always have to leave home for Christmas? And where does all the food go?

Ivar is playing his fiddle one day with the farm's black cat as audience.

Ivar ...was... playing his fiddle and wondering what had happened to the bushels of missing fruit. On the floor beside him lay the farm cat. This cat had strolled in at the door one day, carrying a dead rat in its mouth. Ragna had laughed and said, “Keep on killing them and you’ll always have a warm place in this house!”


The cat had proved such an excellent rat-killer that the sisters happily put down milk and scraps for him. They didn’t give him a name but simply called him Black Cat because that’s what he was. His shining, soft fur was all black with not one single white or coloured hair. From amongst all this darkness his big round eyes shone wonderfully. They were round and golden.


“Where does all the food go, eh, Puss?” Ivar said. “Why won’t my brothers and sisters ever leave the farm?”


The cat rolled on his back, looked up at him with golden eyes and said, “You know how to find out.”


Ivar put down his fiddle and stared at the cat.


The cat flicked the tip of its black tail and said, “Don’t gawp. You want to know where all the food goes? Then stay here for Christmas instead of going to your uncle’s to be made a pet of. Then you’ll soon find out.”
Ivar still stared, with his mouth open, but then pulled himself together. Cats didn’t speak often but it seemed that when they did, they gave good advice.


Ivar's brothers and sisters refuse to let him stay at home but, encouraged by the black cat, he sneaks from his uncle's house and trudges home through the cold and snow. On his way, he runs into the visitors who are on their way to celebrate the mid-winter solstice at his home and who are responsible for all the food vanishing -- at a Feasting of Trolls.

With black cat's help, Ivar sets out to free his family from the trolls but to do so, he has to make a bargan with the local witch, Jaroslav Skin-trousers. This does not turn out well and puts the lives of both Ivar and Black Cat in danger.

Does it end happily, or in disaster? Well, as I say to children when I read it in schools and break off at the most exciting point: "You'll have to read it for yourself to find out." 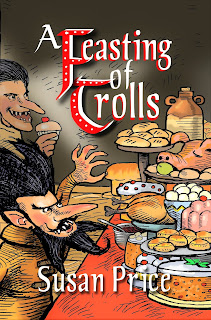 A Feasting of Trolls

Eden Baylee said…
Susan, great book cover for A Feasting of Trolls. Sounds like a fascinating read, even for us older kids. ;)

Umberto Tosi said…
Likewise, love the cover and the illustration by your brother. Feasting of Trolls sounds delicious for all ages! Congratulations and good luck with its re-issue!
26 January 2020 at 07:11

Sandra Horn said…
Great news! All great 'children's books' can be read by anybody of any age and thoroughly enjoyed, as I enjoy all of yours I've read - even though I've sometimes had to leave the light on...
26 January 2020 at 16:20