Some more maundering about landscapes by Sandra Horn

*When this goes out on 20th, I should be in the Lake District, the latest covid restrictions permitting. Who knows? Of the group of old friends we meet there every year, two are shielding and two are effectively in lockdown in Northumberland. If we get there at all, we could well be rattling round in the converted barn on our own and eating at home if the pubs and restaurants are shut. Still, we’ll be in a place we love; a place full of memories. The cover of my book Passing Places was developed from a favourite photograph Niall took some years ago – a view across Ullswater at the Glenridding end. 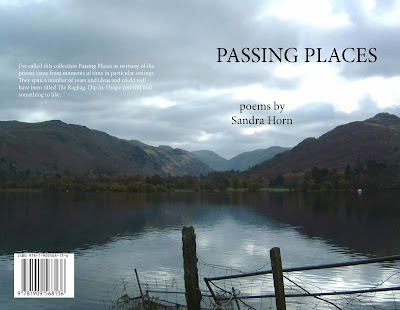 We don’t go in for heroic driving these days; we’ll have an overnight stop in delightful Sandbach on the way, and then grit our teeth for the horrors of the motorway, until we are past Preston and at some point the traffic eases dramatically, the landscape changes, we spot the first drystone walls and then look out for the heart-lifting first sight of the Howgills. I grew up in rural East Sussex among the South Downs. I’d never seen a real live mountain until I met Niall and we had our first holiday together in the Lakes. I could hardly believe we were still in England, so different was it from the ‘blunt, bow-headed, whale-backed Downs’ Kipling celebrated. Walks to the summits of Helm Crag and Barrow Fell would come in later years, along with the heady feeling of being on the very top of the world.

hollows for lakes to mirror the sky.

We need to watch our feet.

I pause to catch a breath,

wonder who first walked these slopes

after the ice rolled back?

Were they hardy souls,

on the steep smooth slopes?

Did they too crest the ridge, look down

at the miniature world below?

Were they, too, fearful for the folk down there,

tiny as they seemed, helpless

I was as dumbstruck then as I had been at my first sight of fen country. A group of us from school hired a cottage on the Broads and went there by bus. Where were the hills? So much sky, and nothing to break it into manageable chunks! It was disorientating.

In this looking-glass land

the dizzying expanse of sky.

No curving bay, no island

I should be lost

in this vast emptiness

one way up, the other down.

It was magical, of course, partly because it was so different from my home turf, which I’d hardly left before. And there was Scotland still to come, its mystical islands inspiring The Silkie:

Far across the water, almost out of sight, there is a scattering of mysterious islands. Sometimes they stand out from the sky clear and sharp, and sometimes they dissolve into the sea mist…

On one of the nameless islands in the far west, where the sea whispers its secrets to the rocks, and the rocks have their stories too, for those who know how to hear them…

And then the Peak District, the West Country, the Yorkshire moors, and so much more - imagine this – fjords on the Gower! There is such infinite variety, to steal a phrase. I wonder, now, how much time I spent gawping with my mouth hanging open, every time a new landscape opened before me? And this was just our small island; the rest of the world was still waiting, then, with its glaciers, volcanoes, thundering waterfalls, geysers, forests….the purply-blue of the sea off the Cinqueterre which suddenly made sense of Homer’s ‘wine-dark sea’.  The beach in New Zealand where hot water bubbles up through the sand, the aurora borealis dancing across the sky in Arctic Norway, oh….

Capturing bits of it, in photographs and verses, is not an end in itself, just a means of re-awakening rich, complex, emotion-laden memories to see us through the flat grey bits – and, perhaps, with any luck, to make stories and poetry.

Umberto Tosi said…
YOu bring the magic of those landscapes to life in prose and poetry I would surely travel there myself would I could at this moment after reading your post. I hope you enjoy your sojourn to the fullest!
20 October 2020 at 10:53

Susan Price said…
Sandra, loved the poems and loved your accounts of seeing the northern hills for the first time.
I come from the 'Black Country Plateau' which is where the Pennines finally give up. It's higher that all the country around and, living here, you get used to never being able to go anywhere without going up or down a steep hill, and to views being cut off by hills.
My Dad used to tell me that, when he did his national service, he was stationed in Norfolk for several months. It was a shock, he said. He couldn't get used to all those wide, level spaces and huge skies. It made him feel constantly uncomfortable and he was glad to get back to high ground.
I took this with a big pinch of salt and forgot about it until I spent a fortnight in the fens myself, working in several schools (back when there was money for such things.) I became conscious of an unease, a twitchiness between the shoulder blades, a constant sense of something being wrong... I couldn't figure it out but then, one day, it came together: too much sky; too much wide open space; get me back to the hills!
Nature or Nurture?
20 October 2020 at 12:54

Eden Baylee said…
Hi Sandra, beautiful poetry and I'm sorry you were not able to go.

We live in difficult times now, where so much is shut down. Thankfully your words bridge the distance of time and place.