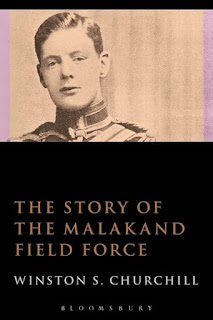 Sir Winston Leonard Spencer Churchill was a British Politician, statesman, army officer and prolific writer. He wrote 33 books in 51 volumes over his lifetime. His fictional output comprised one novel and one short story. His main output however, comprised non-fiction.

After he was elected as an an MP,  over 130 speeches and parliamentary answers were published in booklets and pamphlets. He received the Nobel Prize for literature in 1953 for “ his mastery of historical description as well as for oratory in defending human values.” What is more surprising is that Churchill suffered from a manic depressive disorder and could spend long periods of time, sometimes months low on energy and totally unproductive. For years Churchill had avoided standing to close to balconies and train platforms.

“ I don’t like standing near the edge of a platform when an express train is passing through. I like to stand back and get a pillar between me and the train. I don’t like to stand by the side of a ship and look down into the water. A second’s action would end everything. A few drops of desperation.”

Churchill knew it and named it his “black dog” following Samuel Johnson, who like many other great men suffered from the disease of manic depression.

I have decided to read Churchill’s first book “ A Malakand Field Force” written in 1898 when he was a 22 year old lieutenant in the British army and War correspondent sending home despatches about a rebellion on India’s Afghan frontier.

This is part of a book challenge for 2021 designed to expand my reading.

I like many have experienced times when I feel my own “ black dog” circling. Churchill never allowed the times of despair to keep him from a life of productivity .

As part of my New Years non resolution, I will learn from a great man and persevere.

Ruth Leigh said…
A timely reminder that many great people and writers have suffered with depression and yet carried on. Thank you.
24 February 2021 at 12:09

Griselda Heppel said…
I am rather ashamed that I've never read any of Churchill's writings, though we have a full History of the Second World War, inherited from my father. Guess I'm waiting for time to take it on!

I did know about what he called his Black Dog and it's good to be reminded of what he had to contend with (that bit about his keeping away from railway lines is particularly scary, and poignant). Thank you for this much needed insight into Churchill the human being, somewhat in contrast to the heartless monster it is fashionable to depict him as today.

Reb MacRath said…
I'm with Griselda in not having had the pleasure of immersing myself in his writing. He fascinates me, though. Always has. Now, thanks to you and this short post, I plan to spend quality time with Churchill through his books.
27 February 2021 at 17:32