Predicting a Number One Bestseller by Andrew Crofts 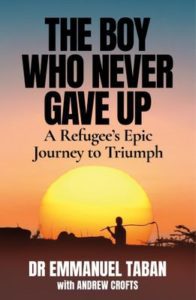 We all know that the life of a writer is more often about rejection and disappointment than it is about triumph and dreams coming true, so here is a little beacon of hope to remind us all that every so often our faith in a particular project pays off.

Earlier in the year Dr Emmanuel Taban's autobiography, “The Boy Who Never Gave Up”, was published, telling the story of how he walked out of South Sudan as a boy and eighteen eventful months later arrived as an ill-educated refugee in South Africa. His rise to eminence and subsequent role in the battle against Covid has been spectacular, and so has the path of the book.

So spectacular has the success been, that his delightful publisher, Annie Olivier, at Jonathan Ball Publishing, has found herself moved to write the following:

“The end of this dramatic week brings some good news related to the world of books. Four months after the release of Dr Emmanuel Taban's uplifting life story, THE BOY WHO NEVER GAVE UP, it is number 1 on the list of South African topsellers (the list for South African authors only).

“Just to put it in context, in my 11 years in publishing I've never seen a book shoot to the number 1 position on any list so long after it had been published. Dare I say, it's something of a miracle, like Dr Taban's story.

“When we started working together, the ever hopeful and unbelievably driven Dr Taban always said, 'Annie, the book is going to be number 1.'

"In response I would just smile and try to manage those expectations, knowing the market is under pressure and that you simply never know how a book will do. He saw the doubt on my face and joked, 'You don't believe me! Don't be so cynical, just wait and see.'

“Today I can say, you were 100% right, Dr Taban, and I should've known not to doubt the boy who never gave up. Congratulations!”

How often have we all dreamed of having a publisher say something like this to us?

The book came out this month from Icon Publishing in the UK.

Peter Leyland said…
I remember you writing about this book, Andrew, in a previous post (I think). It interested me then and I will look out for it. Thanks for the reminder.
27 August 2021 at 12:34