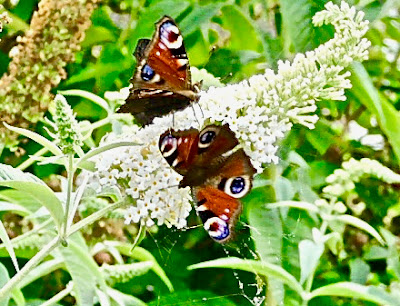 Writing is a process. That’s kind of obvious: but the interesting thing about writing, (or any creative process), is the inevitable interaction between the work, and us, the creatives, as we move through that process.

Here’s a blog based on one I wrote earlier (in 2013). Paragraph 2 began: Yesterday, I completed my second editing of the draft of Baby, Baby’s follow-up: a sequel which takes Max and Jenny into the stormy waters of modern marriage, parenthood, and professional careers. I had one last scene to write, and I knew I’d been putting it off. Well, yesterday was the day after I’d completed the first draft of my latest WIP - the next book in the series... and in taking a break before plunging into first edits, I’m doing some desktop tidying-up, and found this.

Working through the draft, there’ll be alterations to make, to bring the whole together leading to the revelations which were the goal from the beginning... With The Labyrinth Year, it’s a peaceful resolution, another labyrinth, this time on the beach.  And what got me there as now was a strong desire to have done with shuffling details and a big push towards the pre-planned finale.

But love remains central to the plot, though in another way.

Writing a series, characters move on and grow. The idea was born in Cornwall, where this one ends – and moving from idea to text, early on a character called Max began as a research scientist, a charmer, slightly sinister, very ambitious, and  amoral. He soon morphed, and split. The name attached itself to a very different male protagonist. The character became John Guthrie, mostly-absent father to Jenny, the female lead. Love is at the centre of the plot: but do John and Max love Jenny? Does she love either of them? And why?

I love my family, my garden, my cats, and I love chocolate. Or rather, I love the taste and the feel when I eat chocolate. A piece of chocolate completes a meal: does love complete something?

Is it that these guys needed/wanted Jenny, to complete themselves?

Max ‘fell’ in love with Jenny: Jenny thinks she loves Max. She was impressed, flattered, and saved from homesickness and the ignominy of doing the heel trick right before her college interview. She could disappear, in ancient, romantic, historic, drily-academic, super-scientific, audacious Cambridge, from damp, dreary, West Cornwall where nothing happens and everything remains traditional, in 1984. She truly loved him.

Max is constrained by his religious background and culture. Taught that love is receptive, open to others, incarnated in service. While Jenny begins by perceiving Max (along with Cambridge) as her saviour: she needed him! So do her hormones, her ambitions, her expectations.

Then, initially, he let her down...

Jenny’s stepsister Daisy meanwhile feels the world owes her: after all, when she was a small child, her mum disappeared at Glastonbury Festival, taking her love along with her. Adopted by Jenny’s middle-class, conventional, GP, mother, expected to appreciate how this women gives ‘love’, Daisy thinks her early deprivation justifies her angry feelings, and kicks against convention.

While Jenny’s dad, John Guthrie, plays with his daughter’s emotions, by giving her academic chances. Is he trying to make up for removing himself from her childhood when he divorced her mother? His clients want a baby, so much they will pay what they can’t afford, and suffer any pain and indignity of treatment. In return, when they get the baby, they love the doctor who made it happen. He receives affirmation.

Each set of parents, the secular scientists and the fundamentalist religious, claim to ‘love’ their adult children, ‘want the best’ for them… and think they know what’s best. What exactly compels Max and Jenny to continue their relationship, despite parental disapproval? Raging twenty-something hormones? Rebelliousness? Is this love?

Daisy’s rebelliousness, and a gap year job at Guthrie’s research lab lead her into a situation which brings Jenny and Max back together. Though in return for being in relationship, they must both give up something they hold dear, part of themselves, part of their childhood, their upbringing. Their beliefs that what they were taught as children is the only right way to think, and base your life on...

So, all of these scenarios, involving wanting, desiring, craving, and getting, we humans describe as driven by love.

For book two, the stage was set, continuing  the story of love. In book three (hopefully moving towards its adulthood in publication) there’s love in friendship, as their daughter Alice recalls her teenage year of first public exams and formation... Writing is a process, and as the song says, Tell me the truth about love...

The writing process what do we really mean?. is Love 'just a 4-letter word?' writing a series

Peter Leyland said…
Fantastic Mari. All these characters looking for, finding and losing love. Your title took me straight to W.H. Auden:

When it comes, will it come without warning,
Just when I'm picking my nose?
Will it knock on the door in the morning,
Or tread in the bus on my toes?
Will it come like a change in the weather?
Will its greeting be courteous or rough?
Will it alter my life altogether?
O tell me the truth about love?

I expect you know it. Do continue your fictional explorations of the subject. They sound fascinating.
22 September 2021 at 14:12