Last month I wrote about my impending trip to the United States for my nephew’s wedding and I am happy to report it all went ahead and a magical time was had by all.

After writing my last blog I had high hopes that my travels would greatly enhance my creativity.

However, I must confess, at the outset so much was exactly as I expected. Was this because I’ve been to the States before, watched copious amounts of US TV dramas that little surprised me or that an already highly worked imagination had already conjured up these locations while reading?

Many places we visited reminded me of novels I’ve read in the past few years. 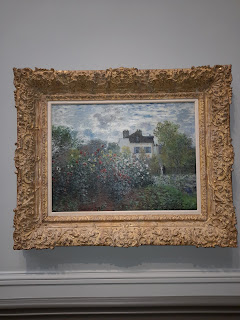 As we wandered through the Washington art gallery, I couldn’t help but be transported to the pages of The Goldfinch by Donna Tartt. Airy, expansive rooms with high ceilings housing the most exquisite paintings. They drew you in from afar revealing the most breath-taking details as you moved closer. How do artists convey the sheen of a piece of silk, the glint of an eye betraying hidden emotion?

A picture surely can paint a thousand words and it is no surprise many authors have taken inspiration from other art to look beyond what’s left behind on the canvas.

We left the city for the mountains. I have to say driving along and stopping at so many viewpoints along the way got a bit monotonous, maybe I was still too jetlagged to appreciate it, but the vista continued for miles and miles and miles with no end in sight – everything really is BIGGER in America. 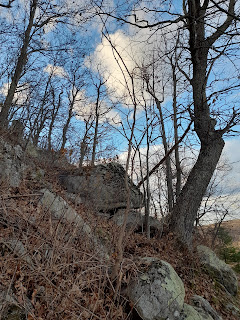 It was much better exploring a tiny area on foot the following day. But instead of hiking I imagined what it might be like to take this trail on horseback, twisting round, climbing higher. Negotiating hazardous tree roots underfoot and overhanging branches at eye level. I read Jojo Moyes The Giver of Stars a few months back, and was then fortunate to hear her speak about it at a literary festival.

The true story of the librarians on horseback had got under my skin, perhaps because my degree is in library studies. Now here I was, albeit in a different state, walking a similar path to the ones they had travelled, The peace, quiet and stunning scenery was overwhelming, I was once more in awe of how pioneering these women were, at the mercy of wild animals, were the bears nearby? What if you slipped or tripped, who would rescue you?

Thank goodness this was a tourist trail, not many people around at this time of year but there was one gentleman who stopped to chat. 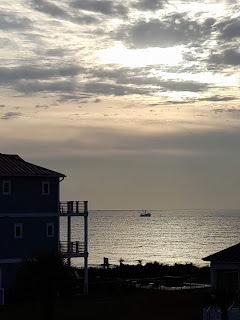 The beach house we stayed in provided the backdrop to every Anita Shreve novel set by the sea that I have ever read, this was after all the east coast, even if we were a bit further south than her books are set. I searched for sea glass on the shore, there was none to be found. But I spotted some winter roses and remembered a garden she wrote of. The flowers were hardy yet windblown, nothing like our English roses plump and fragrant. The harshness and the beauty hand in hand, a place of many stories both told and unwritten. 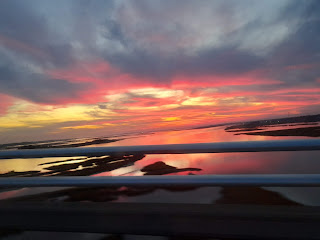 Where the Crawdads Sing by Delia Owens is set in the North Carolina swamplands.
While we never visited anywhere quite as remote as Kya’s cottage, perhaps it is so much a secret place it’s best not to disturb, but sunsets over water evoke a magic that she would very much be familiar with.

Lastly on my literary locations tour something much more prosaic and I have no photo to share. We drove past a funeral home which made me inwardly chuckle as I could imagine Grandma Mazur spending her evenings here at a viewing – open casket preferably. Stephanie Plum would not be far away; didn’t we pass a fast-food place at the last junction?

I treated myself to a Janet Evanovich book from a Barnes and Noble store. It seemed the right thing to do.

“She was in here a few weeks ago signing her books.” The lady at the checkout told me, as she rang up my purchases.

Such a shame we never got to meet, perhaps meeting a prolific author would have fired up me up to write more. For now I'll satisfy myself that I’d visited places on my trip that matched up to my imagination and made my trip uniquely memorable. At least as a reader I have been inspired.

Griselda Heppel said…
What an interesting post. I love your honesty in remarking that travel to spectacular, unknown locations doesn't automatically lead to a burst of inspiration. I've had the same experience of gazing on a fabulous landscape - in USA and New Zealand - and finding the sheer scale of it made it hard to absorb. In the UK we are so used to a lovely view consisting of fields and hedgerows, farms, glimpses of cottages among clumps of trees, undulating meadows and perhaps a sparkle of sea in the distance, that when presented with such a wide open landscape, often with no sign of human habitation, it can be almost alarming! Makes all the more admirable those stalwart pioneers like the librarians on horseback, crossing vast expanses with nothing but their own courage and supplies to keep them safe.
4 January 2022 at 18:30