And the nominees are... Joy Kluver

I think we all like a good awards ceremony – I know I do. Whether it's the BAFTAs or the Oscars or the NTAs, I love seeing who's been singled out for their brilliant performance. Of course, with the BRITs, I spend most of my time thinking I don't know who any of the nominees are and suddenly feel very old.

The publishing industry has its own awards with the Nibbies, and then, there are the book awards. The Booker and Costa (sadly ending) are probably the most well known ones but different genres have their own too. Being a crime novelist, these are the ones I know the best. Last week, the Crime Writers' Association (CWA) gave out their Dagger awards to authors such as Janice Hallett, M.W. Craven and C.J. Sansom. Shortly, six authors will be battling it out to win the Theakstons Old Peculier Crime Novel of the Year up at Harrogate. The very worthy nominees are Laura Shepherd-Robinson, Elly Griffiths, Mick Herron, Joseph Knox, Vaseem Khan and Will Dean.

So, why am I telling you this? Well, I have news... some very unexpected news! There's another awards ceremony at Harrogate called the Dead Good Reader Awards and I've been nominated! I'm still in shock, and you'll see why when I tell you the other nominees. I'm up for the Best New Kid on the Block for Best New Series with my DI Bernadette (Bernie) Noel books. As the awards suggest, the books are all nominated by readers and somehow, I've ended up in the top six along with Neil Lancaster, C.K. McDonnell, Glenda Young, Val McDermid and Richard Osman. Yes, you have just read those last two names correctly! Hence the shock! I think it's fair to say I'm the underdog here. If you'd like to see the other award nominees and maybe vote then go to Dead Good Books . I'd love it if you voted for me but obviously, vote for the authors you want to win. Voting closes on Monday 18th July and the winners will be announced on Friday 22nd July at Harrogate. I'll be there, doing my best 'I haven't won but I'll smile anyway' face and applauding the winner. Next month, I'll tell you all about it. 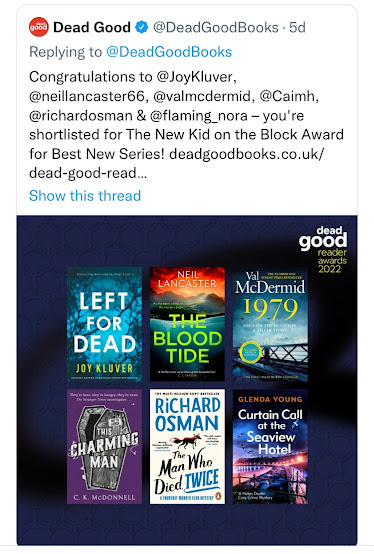 MI6 said…
Let’s never forget, just one slap, that’s all it took … and the OSCARs were eclipsed. Do you know what BAFTA stands for? British Awards For Torrid Amusement. So thank heavens this year’s BAFTAs passed without incident but what about the EMMYs? If you want to avoid the EMMYs why not switch off the TV, cuddle up and read a captivating spy thriller, maybe one they forgot to make a film of. Talking of just such epic noir thrillers, the fictional Bad Actors or Slow Horses from the Slough House stables, and the fact based spy novel Beyond Enkription in The Burlington Files series are just the stuff memorable anti-establishment films are made of. Why read these novels? Both were initially rejected by posh publishers and neither won any OSCARs, BAFTAs or EMMYs ... for different reasons … so they must be good, and they are all must read for espionage cognoscenti.
8 July 2022 at 08:34

Griselda Heppel said…
CONGRATULATIONS! To be nominated by readers unbeknownst to you is the best affirmation a writer could ask for. So exciting. I hope you win.
13 July 2022 at 10:12