As I write this, it's the last day of June, and despite having signed up for Camp NaNoWriMo in July I feel I can relax for the first time in a while. This wasn't really what I expected when I retired from my day job! There are various reasons why June has been exceptionally busy. 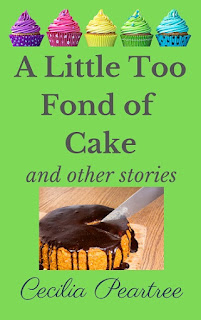 The first reason was a self-imposed one, and as usual, it is that I had given myself more writing deadlines than I should have done. I'd been working for some time on creating a coherent longer story out of five connected short stories I wrote during June 2021 as part of a short story challenge. During May I seemed to be nearing the end of this process and had published a mystery novel I'd also been working on, so I signed up both for July's Camp NaNoWriMo and for a new short story challenge this June. This entailed writing a short story every day based on a prompt that arrived by email at around lunchtime every day. It was a bit more flexible than last year's challenge, and occasionally there was a prompt that didn't require a completed story.

Unfortunately finishing my coherent longer story took a bit longer than expected, so my work on that overlapped with the short story challenge for more of the month than I had hoped it would. But I can be quite determined (or even pig-headed) when I choose to be, so I pressed on relentlessly with both projects, and at this point I've succeeded in completing the writing challenge and also in publishing the novella which has resulted from combining the five short stories. I had some other short stories lying around on my laptop which I added into the final book, in the hope of giving the reader better value.

The second reason was also self-imposed. After a lot of changes of mind on my part about how far I thought I could drive, I managed to get myself and my son away for a long weekend's break in the middle of June.  I had been trying to choose between Kielder Forest Park and Loch Tay when I realised either of these options would mean driving about 80 miles or so each way. This probably doesn't sound very far, but since buying a new car in April 2021 I had only driven about 700 miles in all and the furthest I had driven in one go was 20 miles, so I wasn't confident about my driving stamina. In the end we went to the East Neuk of Fife, about 40 miles away and a very lovely spot on the coast, with bracing breezes from the North Sea and huge skies. 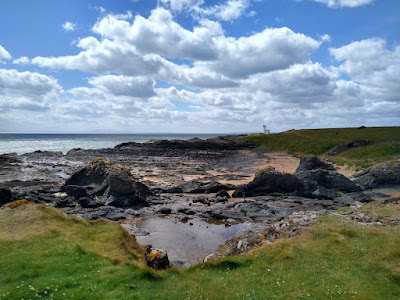 We stopped at about the 20-mile mark both ways to refresh ourselves at Silver Sands beach, Aberdour, where my son highly recommends the freshly-made sandwiches at the beachside cafe.

The third reason for June being busy was not under my control, except that I suppose as a volunteer I could theoretically stop doing this at any time. For some years I've served on a local committee that runs a community centre. Some years back the 100+ year old public hall in which we operated burned down rather dramatically because of an electrical fault in the adjoining building, and since then we had been running our activities in a former shop in the area. We had always known the site would be redeveloped at some point, and suddenly (or so it seemed - we actually had quite a lot of advance warning) the lease ended this June. Thanks to a lot of work on the part of the staff and members of the committee, and a good decision by the local council, we have managed to get a lease on a different and actually much better local building, though the process of obtaining the new lease and moving everything has involved many extra meetings, physical effort and stress all round! We are  now in the middle of settling in.

So, a deep breath and let's see what July brings!