By Katherine Roberts - August 31, 2011
Today we welcome romcom author Victoria Connelly, who is already a famous UK paper-book author as you can see from this picture of her signing in Waterstones. Here she tells us why she is publishing some of her books for Kindle. Over to you, Victoria! 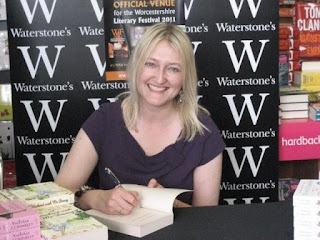 In September 2000, I got married in a medieval castle in the Yorkshire Dales. It was the perfect day. However, just six weeks after our wedding, my husband (who was a television news cameraman at the time) was sent to Israel, which was then a war zone. I panicked - convinced I was going to become a widow - and at exactly the same time, I couldn't help thinking that it would make a great opening for a book: a newly-wed suddenly becoming a widow!

I didn't dare write the book until my husband was safely home but I soon had a completed manuscript called Flights of Angels about a young widow who discovers she has a tiny group of guardian angels to take care of her. 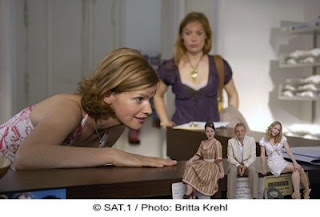 In 2001, I tried to get an agent for it and received nothing but rejections for ages. But then somebody decided to take a chance on me and the novel was submitted to publishers right around the world. And more rejections flooded in.

It wasn't until 2004 that we had an offer of publication. Bizarrely, it wasn't from the UK but from Germany, and not just one offer either – five publishers were bidding against each other and, at the end of a very exciting fortnight, I had a book deal. My German publisher went on to publish two more fantasy rom coms from me:

Unmasking Elena Montella is about a young woman who is given a magical Venetian mask which has the power to turn her invisible so she is able to spy on her three fiancés and find out who is the right one of her.
Three Graces is about a woman who discovers that her husband's ancestral home is haunted by an 18th-century ghost who simply refuses to leave.

In 2008, Flights of Angels was turned into a film. This was one of the most amazing experiences of my life and my husband and I flew out to Berlin to see it being made and even got to be extras in it. But, despite all this excitement, these books have remained unpublished in my home country and it's been so frustrating that my friends and family can't read them in English.

Until Kindle, that is.

Now, I'm thrilled to see them made available in the English language at long last. Kindle is so exciting for writers and for readers too. As authors, we're told – all too often – what readers do and don't want: “Readers don't want magic in adult books.” “Readers don't want short stories or novellas.” Well, I'm pleased to say that all this has been proved wrong. Readers do want these books, and I'm very happy to be a part of this new publishing sensation.

Thank you very much, Victoria! And the best of luck with the Kindle books. Magic? Masks? Guardian angels? They sound EXACTLY the sort of thing this adult reader likes... I'm off to download them right now...
Flights of Angels Three Graces Unmasking Elena Montella Victoria Connelly

Susan Price said…
I totally agree with Kath! 'Three Graces' especially appeals to me - I'm into stroppy ghosts.
Who says adult readers don't want magic in books? Who, exactly, says they don't want novellas or short stories? Is it any wonder dead-tree publishers are in trouble when they're as wilfully daft as this?
31 August 2011 at 11:13

Victoria Connelly said…
I loved writing my stroppy ghost - so much fun!

Have you heard of the success of Stephen Leather's 'The Basement'? It's only 40,000 words. Imagine trying to sell that to a traditional publisher and yet it's been in the Kindle top 10 for months and months!
31 August 2011 at 11:42

Ann Evans said…
I really enjoyed reading your post Victoria, and love the sound of those books. Well done you, for persevering in finding a publisher, and for getting them up now as ebooks.
31 August 2011 at 15:09

Emma Barnes said…
I am so intrigued by Guardian Angels - in fact I have just used them myself in my new children's book, where an updated Guardian Angel - or Guardian Agent - is sent to sort out an incurably naughty child!

I will definitely be checking out your e-book, to see how your book tackles this theme. I can't see why it wouldn't work well in a romantic novel.
31 August 2011 at 17:43

Victoria Connelly said…
Thank you, Emma. I'm still baffled that publishers think fantasy won't work in adult romances. I think adults are reading children's books to get their 'magic fix' and it's a shame they've not got their own books to read although the popularity of Stephanie Meyer might be changing that now.
31 August 2011 at 18:51

Alex Gutteridge said…
I feel thrilled and frustrated for you at the same time, Victoria but thank-you for posting this. It gives hope to all of us writers who are told that our writing is good but our stories just don't 'fit into a specific marketing slot'. Best of luck with the e-books. I think I'll put a kindle on my Christmas list and then I can read them. They sound great fun.
31 August 2011 at 19:08

Victoria Connelly said…
Alex - thank you! Kindle is definitely the author's friend and those of us who have had difficulty getting published tradionally but are still writing books that people want to read are really embracing it. Exciting times!
31 August 2011 at 19:55

Amarjeet said…
excellent,thanks for ur information

ghostwriter for hire
affordable editing and proofreading
7 July 2012 at 13:59