By Susan Price - August 25, 2011
Susan Price has been a professional writer since she was 16, and has published 60 books, with Faber, Black, Hodder, Scholastic, OUP and CUP, among others.  She is now self-publishing, and her books are available as downloads from Amazon.
'My story is set (says the cat) in a far-away Czardom, where the winter is a cold half-year of darkness.
In that country the snow falls deep and lies long, lies and freezes until bears can walk on its thick crust of ice. The ice glitters on the snow like white stars in a white sky!... the winter is one long night, and all that long night long the sky-stars glisten in their darkness, and the snow-stars glitter in their whiteness, and between the two there hangs a shivering curtain of cold twilight.’ 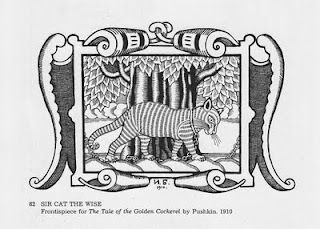 The cat is the ‘learned cat’ which often begins Russian folk-tales, who is found in Pushkin, and in Bilibin’s beautiful illustrations (left); but the quote is the opening of my Carnegie winning book, ‘The Ghost Drum.’  (Click here to read the first chapter.)
I wanted to write a story which was, at once, beautiful and terrifying; full of the darkness and intense cold of a Russian winter, and the brilliant jewel colours of Russian folk-art.
The story tells of a witch who comes to a slave-woman on the darkest, coldest night of midwinter, and begs her newborn baby from her.  It also tells of a jealous Czar, who imprisons his new-born son at the top of a tall tower, for life.
It tells of a witch’s education: ‘Chingis was quick to learn the simplest word-magic, and could soon make anyone believe anything. And she learned to smell a lie, and to see the truth lying hidden under a liar's tongue. And no sooner had she learned that much than lessons in another magic began: the magic of writing.
'Writing is another common magic,' said the witch… 'When you can read this book, Chingis, the voice of a witch who has been dead two thousand years will speak to you from it. Every day, people who know nothing more of witchcraft, open books and listen to the talk of the dead. They learn from the dead, and learn to love them, as if they were still alive. That is strong magic.'
And it tells of ice-apples: ‘The box held ice-apples. Their cold rose from them in a chill, apple-scented mist. [They] seemed made of glass. Their skins were transparent and so pale a green as to be colourless.
'At the heart of the apples, hanging in space, could be seen the flower-tracery of the cores, and the black pips.

'Chingis lifted an apple by its stalk…and turned it. The dark pips whirled… Juice sparkled in droplets, like frost…The apple gathered to itself all the light there was, and shone without heat; shone dimly and softly, like light seen through water, a light coloured with the faint, barely visible green seen in snow.
'Ice-apples are rare. Compared to them, diamonds are as common as sand grains on a beach. Unicorns are more easily found than ice-apples. Yet here was a box of them, shining like moonlight on a night of rain.’
In its pre-electronic life, the book was published in Britain, America, Denmark and Japan, and was widely reviewed.
‘…this powerful and musical story placed in the world of Northern…folk-tales, but strongly and fiercely original... Compelling…’  BOOKLIST.
'The Ghost Drum is a richly emotional and lavishly written tale of love and…tyranny… This is adult fiction for [children].  TIMES LITERARY SUPPLEMENT
'Price [is] a hypnotic storyteller who laces her work with delicate cynicism.  She uses vivid imagery, as well as effects occasionally uncompromising in their brutality…her story flows, told by a master. A find for lovers of folklore and fantasy.'  KIRKUS REVIEW.
When I give talks in schools and libraries, people often ask me where they can buy copies of 'The Ghost Drum'.  Now, I'm glad to say, I can tell them: 'On Kindle. It'll cost you £1-71 ($2-99), and you can download it instantly.'
The first two books in the original sequence, Ghost Drum and Ghost Song, are already available as downloads, and in a couple of days the third book, Ghost Dance, will join them. And I'm thrilled about it.

Stuart Hill said…
Congratulations on the soon-to-be-published Ghost Dance! I loved Ghost Drum and now with the others available on Kindle I'll be able to catch up with the sequence.
I'm also so glad to find a fellow fan of Ivan Bilibin! I think his work is superb and vastly under-valued and overlooked by the art world. Probably because he's considered by some only as a stage designer and illustrator (which is wrong anyway). In fact I think it's true to say that the artists who work in the field of illustration suffer with the same sort of snobbery that genre writers suffer in the literary world.
Anyway, congrats again on Ghost dance. I'll be downloading as soon as it's available.

Susan Price said…
Thanks Stuart! And I absolutely agree about Bilibin and illustrators in general.
25 August 2011 at 09:41