Getting Quirky! By Ann Evans.

Since four of my out-of-print books have had a resurgence of life thanks to ebooks, it occurred to me that you may not have seen the original books – and their very quirky final chapter.

Back in the late 1990s/early 2000 I was being published by Scholastic Children's books who commissioned me to write four murder mysteries for 8-12 year olds of about 25,000 words each. I had 12 months to produce them, which was a bit of a push, but it kept me out of trouble.

Each story had to have a murder in it, and my protagonist who was involved in some way, was the one to work out who did the dastardly deed – even when the police thought otherwise.

The stories took a lot of plotting! To make it a real puzzle for the readers, I had to ensure that all the characters in the story had a motive for murder, as well as the ability and the opportunity. There were red herrings galore along with the clues.

Now we get to the quirky bit. As we approach the climax of the story, when my main character comes face to face with the truth (and the murderer) we halt at a real cliffhanger. And we see.... 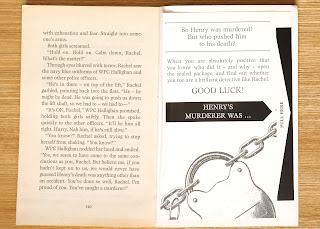 Here is the 'Sealed Chapter' (hence the series title – Sealed Mysteries). The readers pulled a little tag  and – low and behold! Another chapter that was tucked inside could be pulled out. This final chapter revealed who the murderer was, and what the major clue was that alerted our protagonist to the truth.

These days when I go into schools on an author visit, I still take these Sealed Mysteries in – and the kids are fascinated, although quite a few of them admit that if the book was theirs, they probably would open the sealed chapter first.

Quite recently in the photographic studio I share, a young woman came in to enquire about a photographer for her wedding. She spotted Fishing for Clues on display and went into raptures about how much she loved the book, and how she'd got an autographed copy which she treasured.

Ah! If only the publisher had been so enthusiastic. They printed three books but not the fourth - a financial decision, I gather. Ho hum....

Turning them into ebooks, I still wanted something quirky at the end, so went for a link to a secret page on my website, where you'll get help with knowing what were clues and what were red herrings.

I called the ebook series 'Little Tyke Murder Mysteries' and enlisted the help of my granddaughter, Megan to become my 'Little Tyke' logo; and photographer friend, Rob to work his magic on the photos to create the image below (and make new covers). Plus, I was able to publish the fourth in the series - Pointing the Finger.

Good old ebooks! What's the story behind your etitles?

madwippitt said…
I'm awed by your grasp of technology - I was able to point my cursor at the sealed arrow on your picture, click, and the secret 'sealed' part popped up on my screen - I wasn't expecting anything to happen and it did!
13 February 2012 at 09:36

Susan Price said…
Absolutely fascinating, Ann! I really enjoyed this - and thanks, madwippet, for revealing the secret of the secret chapters! I hadn't spotted that!
13 February 2012 at 10:58

Ann Evans said…
Thank you for your comments. I wish I could take credit for the technology of the hyperlinks, but this site just seems to have done it without any assistance from me!!
14 February 2012 at 13:32