MONTH NINE OF EPUBLISHING WENT WELL! by John A. A. Logan

By John A. A. Logan - September 11, 2012
I’m happy to report that in August, my first ebook novel, The Survival of Thomas Ford, won a Special Award in the eFestival of Words Best of the Independent eBook Awards 2012!


The "I've Been Shyamalaned" Award for Best Twist
WINNER: The Survival of Thomas Ford by John AA Logan (White Butterfly Press)
RUNNER UP: A Blade Away by Jack Wallen (Autumnal Press)

Soon afterwards, I was invited to join a group of seven other authors, mostly based in the USA, who had won awards in other categories, for the purpose of organising a sale of all 8 of our books on August 27-28


The sale was announced on quite a number of blogs, in this format:


Readers! Eight award winners in the 2012 eFestival of Words “Best of the Independent eBook Awards” have grouped together to offer you an amazing opportunity. They’ve reduced the prices of their award-winning novels to 99 cents for August 27 and 28th!
Whether you like to read mysteries, romance, horror, young adult, women’s fiction, or fantasy, this group has it. Are you a writer yourself? Do you want to learn all about digitally publishing your next masterpiece? They’ve got you covered there too.


Get all eight award-winning ebooks for the price of one single paperback!
Best Mystery/Suspense: Dead is the New Black by Christine DeMaio-Rice


Award for Best Twist (“I’ve Been Shyamalaned”): The Survival of Thomas Ford by John A.A. Logan


As well as a great many blog posts, paid ads were taken out in ENT, Digital Books Today, and Kindle Fire Department, and Facebook, like this one below:

Here they are, folks. The best of the best! Each of these eight novels won the 2012 Independent eBook Award for its respective genre. These are sure to entertain, and they're on sale today for just 99¢ each! Grab all eight now and see why critics and readers agree that these are the best books of the year!


The result of the sale for me was 200 copies of The Survival of Thomas Ford sold in the USA in 48 hours, and sales have continued quite steadily since the 99 cent sale ended and the book’s price returned to $2.99


The Survival of Thomas Ford also went to number 52 in a Top 100 bestselling category, and to number 1108 overall bestselling paid Kindle ebook on USA Amazon during this sale, the highest rank it has ever achieved in the USA.


My colleagues in the sale saw similar, and in some cases much better, results!


It was interesting to me that by working together in this way with US authors, I was able to greatly increase my book’s visibility in USA (nearly all the sales I had were in USA during the sale, with perhaps 2 in UK and my first 3 sales ever in Germany also, danke!), and likewise I believe the US authors saw higher than usual UK sales, so the collaboration seemed to “fill each other’s gaps” in that way.


I greatly enjoyed working with the other seven authors on the project anyway, and learned a lot from it!


Lastly, to round off my ninth month of epublishing, I released my second ebook, Storm Damage, on 2nd September: 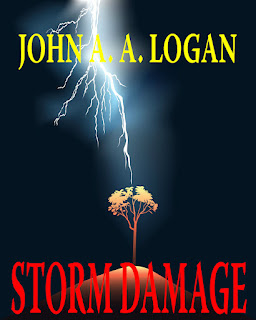 STORM DAMAGE is a collection of ten stories


LATE TESTING - Michael survived the trenches of World War One France, but can he survive the English village he returns home to?


NAPOLEON’S CHILD - Has old Frank been alone for too long, or did a young boy really appear from the desert mysteriously one night?


AT THE EDGE OF THE KNOWN WORLD - In a very bizarre circus, a Big Top performance goes horribly wrong


THE MAGENTA TAPESTRY - Calliasta may have to sell the old house to Russian mafiosi, but is it true that the family gardener, Ernest, owns the grounds?


THE POND - An elderly man tries to recreate a lost love but is Nature on his side?


STORM DAMAGE - How hard can it really be to make an insurance claim?


I think I was more nervous about releasing Storm Damage than I had been about releasing The Survival of Thomas Ford last December 25 (releasing really does seem the right word, it’s like holding up your forearm and letting a bird drive into it with its talons to get the thrust it needs to take off and fly away into the sky, free, leaving you with just a view of its ever shrinking feathered shape as it dashes for the horizon!)


It turned out there was no need to worry though, the supporters of The Survival of Thomas Ford out there were ready to help the new hawk find a safe, high thermal to soar on, sales came in fast on the first day I announced the book’s release (3 days after publication actually, as I felt I had to wait for the book’s Look Inside feature to go “live” before telling everyone).


By the afternoon of the day I announced Storm Damage was out there, the book had risen to this position in the Amazon UK chart, entering three Top 100 bestselling categories:

Thanks to everyone who has helped support my books!


I appreciate it very much and, most of all, it has been a lot of fun!

julia jones said…
Well done John. Your well-earned successes are an encouragement to us all.

Dan Holloway said…
huge congratulations and hugely deserved. You're a star!
11 September 2012 at 12:15

Unknown said…
Congralations on your new release, John! I'm so happy that you are seeing continued success after winning the eFestival of Words award :)
11 September 2012 at 15:07

Hunter said…
I'm very proud of my friend John Logan. This American here has had a big struggle trying to get published and John truly is an inspiration. In fact, one of my very trusted confidantes recently suggested that I try self-publishing e-books and I mentioned John's name/ success as a good reason to do it.

What a gracious and helpful man John Logan is. I'm following his career closely and I'm pulling for him completely!

So glad to know you! I loved your article and I count it an honor to be acquainted with one in the League of Extraordinary Authors! :) Cheers and talk soon! --Hunter
21 September 2012 at 14:39

ePublishing said…
Hello john, I read the post and very systematically written, I need of the information like that cause I've started my own ePublishing Company.