Food for thought at the Festival Of Romance by Hywela Lyn

The second Festival of Romance was held on the weekend of the 15th - 18th November in Bedford, a new venue this year, and a slightly different programme.

The Book Fair is meant to promote the romance genre, and most of the authors present publish in both paperback and eFormat. 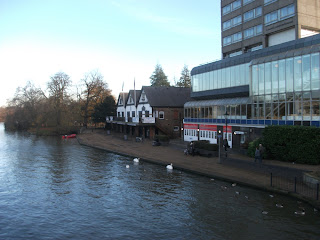 I stayed at the Park Hotel, overlooking the River Ouse, and shared a room with Sarah Tranter, whose debut novel 'No Such Thing As Immortality' has just been published in E-format as well as paperback. It's always a delight to meet up with authors whom one has previously only met on-line, although we had met briefly the previous year.
I did not attend the ball on the Friday night, although I hear a great evening was had by those who did. 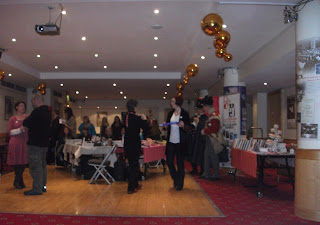 Most of the events took place on the Saturday, including a book fair in the corn Exchange.The place was humming with authors busy laying out their tables and it was great to see famliar as well as new faces. 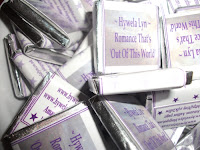 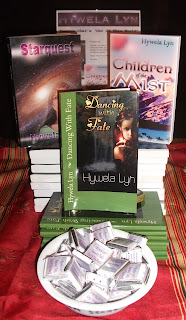 I invested in some chocolates with my name and tagline on, they seem to have been very well received, and I managed not to eat too many myself!

As soon as I'd set up my books though, I had to hurry off to do a book reading, which was held at a lovely little coffee shop where we were treated to tea and cake. Unfortunately I don't know Bedford, so it took a while to find the place, but after several wrong turns I eventually found it. 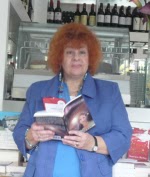 I'm not all that confident when reading in front of other people, which is probably why I look as if I've just swallowed a lemon! I managed not to stutter or stumble over any words though and actually quite enjoyed it, especially when someone came  up to me afterwards and said how much they'd enjoyed the excerpt.

I'd no sooner finished there, than I was off to another reading in the shopping centre.  This time I read from another book, 'Children Of The Mist'.  At this rate, I thought, I might get quite used to 'public speaking.'

After a 'networking brunch', Sunday was devoted to a conference with several visiting speakers including publishers.  There was a break at lunchtime for a 'working'  buffet lunch, so the speakers were not interrupted by any 'rumbling tummies'! The speakers  all seemed to be in tune with the idea of E-publishing and there was also some discussion on self publishing.  It's encouraging to know that readers too are becoming more familiar with E-books and  I left the conference feeling that while paper books will be with us for some time to come, the popularity of E-books and a Kindle or other device whereby one can carry hundreds of books in the space that used to be occupied by one paperback is increasing daily.  The E-book is definitely alive and well and thriving!

She also blogs at her own BLOG, and THE AUTHOR ROAST AND TOAST
and is on TWITTER and FACEBOOK

Susan Price said…
Very interesting Lyn! Thank you. I especially like the chocolates! Though I probably would eat them all myself, however little time I had. Shorter the time, greater the challenge!
It makes me wonder if we shouldn't see if we could organise something similar. An e-book weekend - or afternoon, at least.
It reminds me of my idea of hiring a room with wi-fi, where we all do readings, talk about the writing of our books, etc, and the audience, if they like, can download our e-books then and there!
Could any non-electrics who're reading leave a comment saying whether they find that an attractive idea?
Some Authors Electric chocolates shouldn't be beyond us?
29 November 2012 at 10:10

Hywela Lyn said…
What a great idea, Susan! A good way to have an 'e-book'fair similar to print books. As for the chocolates, they are delicious (mine were dark with mint flavour, although they do milk chocolate ones as well, and I'm sure they could put an impression of the AE logo on the wrapper.
29 November 2012 at 10:47

madwippitt said…
What a brilliant idea - chocolate with your name on! (It's not Terry's, its HYWELA's!!!)