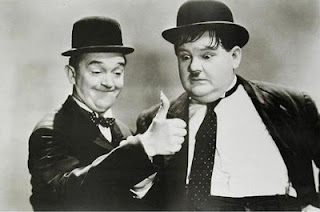 There have been some great partnerships over the years - Laurel and Hardy, Morcambe and Wise, The Two Ronnies, Fred Astair and Ginger Rogers, Andrew Lloyd Webber and Tim Rice, Rob Grant and Doug Naylor, the list goes on. Great entertainers who paired up to produce some wonderful entertainment.

However not quite so many double acts spring to mind when it comes to collaborating over writing  a book.

Thanks to the wonders of Google, I've just picked out a few of the successful writing partnerships. For instance Neil Gaiman and Terry Pratchettt wrote Good Omens together in 1990 which was nominated in the World Fantasy Awards.

Stephen King teamed up with Peter Straub to write The Talisman in the early eighties which also was nominated for the Locus and World Fantasy Awards in 1985.

Back in 1930 Dorothy L. Sayers wrote The Documents in the Case with author Robert Eustace. And of course there have been lots and lots of other books that two or more writers have collaborated on. Clearly, sometimes when two people get together, some amazing pieces of writing emerge from the partnership.

I imagine also that many of the countless books that are written by one author also depend a great deal on someone else - someone the author trusts to cast an eye over their manuscript to pick out any flaws in the plot or has the knack of pointing out areas for improvement without getting the author’s back up.

While on the other hand many of us just get on with our writing totally on our own with the only person to see it before it gets published (if it ever does) being our agent or editor.

So what’s it like to write with a friend, are two minds better than one? Or would two imaginations counteract and contradict?

In the past I’ve teamed up with a good writing friend, Maxine and we’ve written a pantomime which was successfully performed, a sit com (years ago) which got us an agent at the time but not a TV contract (sadly); and currently we’re trying our hand at a couple of TV dramas, one is a comedy and one a thriller. That’s the plan anyway, and even if our joint work never sees the light of day, we do have a laugh as we’re pooling our thoughts. In fact we seem to descend into fits of giggles over the serious drama more often than with the intended comedy. Combine our efforts with a glass or two of wine and probably a take away curry to start with, at least its one kind of writing which isn’t solitary.

But now for something completely different. A good friend, Rob who has worked with me for over 20 years as the photographer for my magazine articles and with whom I share a photographic business, always has loads of ideas for stories and I’ve been telling him for years that he ought to write them down. “No, you’re the writer, I’m the ideas man,” is his stock answer. Although on one occasion when he did write a story I saw that indeed he could write. But he’s stuck to his guns and left me to do the writing.

A couple of years ago he told me of an idea he’d had for a long time. It was a very dark story, far darker than I could write, and I knew I couldn’t do justice to creating the blackest character in the story. However I knew I could craft out the rest of the story into which this extremely nasty, evil character was going to slink. And so we decided upon a joint venture to write this book between us.

Ours is probably not the conventional method of two people writing a book, we haven’t collaborated over every scene and word. As I’m the writer, as he says, I’ve had a free hand in crafting out the story. At the points where I need his more sinister input I’ve left notes in bold capitals; one particular character needs Rob’s 'voice' when it comes to a particular subject; and the narrated scenes involving the evil character are in the manuscript simply in note form. Can you make her do this or say that please Rob? (Yes the evil one is female).

And now it’s finished and polished and a little while back I passed my 'baby' somewhat apprehensively over to Rob to write in the darker, sinister bits.

Admittedly it was a bit nerve wracking to hand a story over to someone else and when, one morning he announced that overnight (3 in the morning in fact) he’d written in the first narrated scene from our nasty character’s point of view and gone deeper into my main character’s subconscious, I sat there with trepidation as he prepared to read out his words to see if I liked them. (He was as nervous as me at this stage in case I hated what he’d written!)

Woo hoo! The effect as he read his words in his extremely deep and demonic voice (which had me thinking it would definitely work as an audio book) and felt the shivers running down my spine, my worries vanished. From then on I couldn’t wait for the next instalment.

Writing a book this way is certainly different for me. I’ve never passed a manuscript to another person and said, okay, now improve on this, and I can’t see me doing so with anyone else. But for me with this book, it’s the right way to go. Of course only time will tell whether it’s a success or not but in the meantime it’s definitely a fun and exciting collaboration.

So how about you, do you always work alone, or do you sometimes team up with someone on your wavelength for a joint writing project? And has it worked for you?

I've always worked alone, Ann. My writing is my playground. I tried collaborating with my brother once - we get on very well. It ended in a punch-up.
If you've got to let somebody else dictate what happens in a book, or compromise on everything - why bother?

I wrote a story for my own self-published anthology, and as it concerned a new concept in the horror-fantasy genre, I wondered what it would be like if I gave the characters to author friends (FB) and asked them to continue the story with a few ideas how they should start - crime- romance, etc.
I shall know by Christmas if it was a good idea or not.
William Stephen Taylor (FB)

The only time I ever worked in collaboration with others was for street theatre. I wrote a play based on the Forfar Witches which was a collaborative work with the production team. It was a great experience and I enjoyed it, but I can't imagine doing that for my novels!

I've always found that, in writing exercises at least, the main result of a collaborative venture is that it's released things in me that might otherwise not have surfaced. The idea of writing a chapter and handing it on to a friend to continue the story is exciting and challenging. (I should add that I've never done this with a view to publication.) Your own ideas get taken in surprising directions and the characters that are handed back to you for your next instalment have altered in ways they wouldn't have without the external influence.

My only real collaborative venture which was made public was a series of revue shows which we took to the Edinburgh Festival Fringe back in the 70s. Once again, though, rather than write the songs and sketches together, the two of us thought up ideas, chatted about their potential, then decided which of us would be best equipped to write each of them. We were lucky. It worked.

Your blog has inspired me to give collaboration another go some time. Scheduling conflicts interfered in an attempted collab with a good friend, Brad Strickland. But my first attempt, long ago, was a total bust. I tried alternating chapters with a partner whom I won't name. I learned, after we started, that the two books of his I'd admired had been completely rewritten by his agent and a whole team of house editors. And I knew I was in trouble when he turned in a chapter containing this line (a long chapter written in two days): 'Her eyes drooled wetness.' So did mine when he told me proudly that he meant she cried.

My past experience is somewhat different. Screenwriting isalways collaborative. With writer low in the pecking order. Writing for stage - collaborative in that the script is not the 'last word' in what happens (and for devised theatre incredibly collaborative)
One of the joys of novel writing as an indie is that one is able to follow something right through with complete responsibility even to publication. Though I think that the 'editor' relationship with mainstream writing, in some way represents collaboration doesn't it? Horses for courses I guess.

What a fascinating post - glad to hear your joint ventures have worked out so well. And they sound like you've had such fun doing them too. I love the idea of working with someone else, and I've written quite a few non-fiction books now where I've collaborated with another person: I've learned a lot while doing them, but they've never been quite the fun-filled projects I always optimistically envision.
But as far as my fiction is concerned - no! Mine! All mine! There's something particularly personal about fiction ...
Although there's a part of me that still hankers for a writing partner. Maybe I could clone myself ...

Quite a number of examples in the crime-writing world. I think immediately of my dear friends Nicci Gerrard and Sean French (Nicci French) also 'Ellery Queen' (cousins) 'Emma H....(forgotten surname, also cousins, rather good accountancy crime) and I recently met a mother and son partnership 'Caroline ...' (again brain is dead.) Zizou Corder (successful children's author) was a mother and daughter. There are also all the unacknowledged partnership - like Dick Francis (largely written by his wife Mary and now carried on by their son Felix)
Whatever floats your boat, I say

I don't think I could ever collaborate on fiction. Although - like all of us, I suppose - various people have told me that their life would make a book, and if I could write it for them, we could split the proceeds! But I've heard of people doing it very successfully so I wish you lots of luck with your current project. Theatre is always collaborative - with the writer higher up the pecking order than television, thank-goodness. (Cally's right about that! In TV they just want you to give them the script, go away and stop bothering them while they set about carving it up.) I love the collaborative nature of theatre though. Especially when you're working with somebody you like and respect - a group of actors you trust.It doesn't always happen like that, but when it's good, it's amazing. And what emerges is something different and definitely better. I can imagine it might work for fiction with the right person, but I've never found that person yet!

Thank you so much for all the interesting comments. Apart from the two people I've collaborated with in the past, I can't see me trusting anyone else with a joint writing project. I honestly think I've been lucky with these two friends.