Death of a Kindle - Kathleen Jones

By Kathleen Jones - April 05, 2013
I was recently in Cambodia - which proved more of an endurance test than I'd expected.  What with being ill, my email and Facebook account hacked and having my cash-point card stopped by the fraud unit I didn't get the chance to enjoy it as much as I would have liked.  And when my Kindle froze and died it was the last straw!   Perhaps it just didn't like the heat, or had been through too many airport security scanners.  These days they scan your baggage at every transit point - once as you get off the plane and then again before you board.  Milan to New Zealand via Dubai, Bangkok and Sydney, then NZ to Cambodia via Sydney and Bangkok,  racks up a lot of scanning.  I try to remember to turn it completely off, as advised, but there's always the one time you forget. 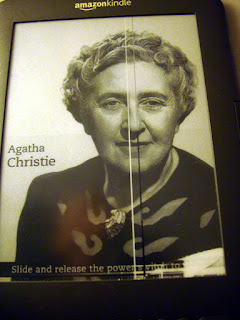 It was the classic screen of death - Agatha Christie (a nice touch I thought) with two lines through the middle and an odd fluffy whiteness at the bottom corner.  I tried re-setting it by holding the button across for 30 seconds while plugged into the mains, but it didn't work.  Neither did holding down shift and alt and pressing the R key.  Someone on an internet forum recommended putting it on a hot water bottle and sticking it under the duvet for half an hour, but I didn't think it sensible.  My beloved Kindle is more than 2 years old and I didn't take out an extended warranty, so there's no point in returning it to Amazon.  It's dead.  The relationship is over.

The screen seems to be a bit of a weakness with Kindles.  My partner Neil is on his 4th Kindle in less than 2 years - all supplied on his extended warranty.  Amazon send him a replacement within hours of the death of the old one.  Some of them don't last very long.  We were told by an Amazon rep on the phone line that they don't send new ones - only reconditioned Kindles. So they're more likely to go wrong than the original.

Ever wondered what's inside your Kindle?   Well, since mine is simply going in the waste bin, my resident geek couldn't resist taking it apart to find out.  Here's what it looks like without the cover - a really complicated piece of kit. 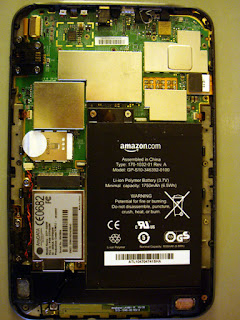 That big oblong thing is the battery.

And this seems to be the processor and memory chip. 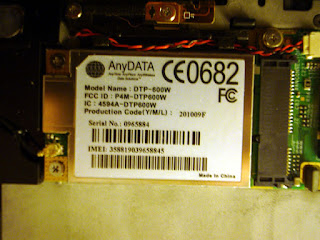 Underneath the battery there's a plastic cover that hides the screen.  It's pretty flexible and feels like a membrane. 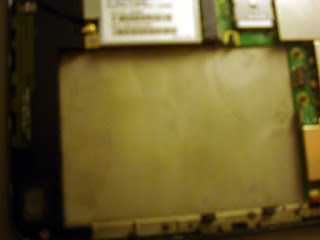 So now I know what's inside, but I've still no idea how they work!  I feel quite sad, because I really liked Kindle 3.  Fortunately, although it was dead, I could still connect it to the computer like a hard drive and take off all the documents and freebie books I'd loaded on.  And the Amazon bought books can be downloaded from the cloud again onto my new Kindle Fire. 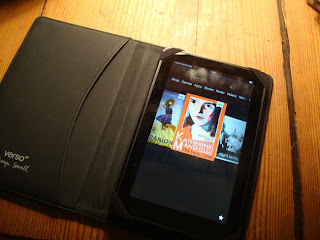 Kindle Fire isn't like a Kindle at all - it's a tablet.  You can play games on it, watch the news (it has BBC i-player), surf the internet (with their Silk browser) and almost anything else that distracts you from reading.   But the books look really good.  High Definition screen, full colour, touch screen (complete with fingerprints).  It's awesome! I'm still getting used to everything it can do.  I just hope it proves more reliable than its ancestors. There's only one drawback - it has Solitaire ........

Kathleen Jones blogs at 'A Writer's Life'
and her new 'E-Single' 'I think . . . I am going to die' (Katherine Mansfield at Fontainebleau) is just published by Bridget Williams Books, New Zealand.
Find out more about Kathleen's books at www.kathleenjones.co.uk
or check out her Amazon author page.

Bill Kirton said…
Interesting, Kathleen, especially the mini-tour of the inside of the gadget. It's all alchemy as far as I'm concerned. Oh, and your note about Solitaire struck a loud chord.
5 April 2013 at 11:07

Debbie Bennett said…
I can recommend the paperwhite for anyone not wanting a tablet. It's touch screen, matt and not backlit - but much easier to read than the old kindle. And has no built-in distractions...
5 April 2013 at 11:23

Kathleen Jones said…
I would definitely rate Solitaire as the biggest barrier to writing the Great Novel. Need for an online counseling service I think - or hypnosis!
5 April 2013 at 13:15

Kathleen Jones said…
Yes Al - I've got it on sepia - you can choose the colour/contrast and I've found that sepia is the most relaxing - best feature is being able to read in bed without the light on and you can reverse the black on white for easier night-time viewing. Altogether I'm happy with it.
6 April 2013 at 10:24

glitter noir said…
I've had pretty much the same experience. No way to reboot it--and since it was used, no warranty. Currently, I'm using the free Kindle app on my laptop.
6 April 2013 at 14:37

Pauline Fisk said…
I love the Kindle Fire. Far from distracting me, it's made the online reading experience a pleasure where before kindling was a chore. Fire's a good name. It does feel alive.
6 April 2013 at 22:44

Katherine Roberts said…
I have the old 3G too, and I know what it looks like inside since I bounced it off my patio a few weeks ago and the back cover sprang open... but mine must be one of the good ones, since it is still working!

I pressed the back cover back into place, and have just updated it from version 3.1 to 3.4 with no trouble. The screen is intact, but one corner looks a bit rough where I think it hit the pavement. Hoping it will last another 2 years.
8 April 2013 at 19:27