Easter, Tulips, and The wall of Death! Pam Howes 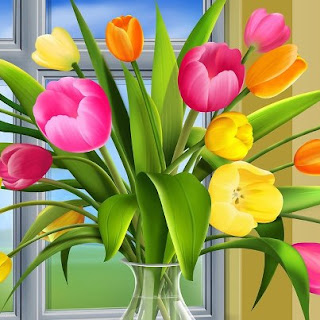 Happy Easter holidays to everyone. The month has flown - again - clocks have gone forward and it'll be Christmas before you know it! But let's not go there just yet. To help the passage to the long-awaited spring, here's a pretty bunch of tulips to enjoy.

Well the main topic of conversation on writer forums and groups at the moment seems to be the Amazon Goodreads twinning/partnership or whatever, - and authors voicing their opinions as to whether it's a good thing. There seems to be a divided opinion. I have to be honest and say that Goodreads is a mystery to me. I can never find my way around the place and when I do a review I'm never sure if I've put it in the right place. I avoid the site as much as I can, only venturing on there for the odd nosy when the fancy takes me. It seems to be full of daft reader lists. "Characters we hate." "Authors to avoid." "Books to read when you change your socks!" I mean, what's that all about? As far as I'm concerned the site needs a damn good moderator and a few ground rules. Anyway, grouse over for today! But it would be interesting to hear other's views on the subject.

My first novel and I didn't make the next round of ABNA and I have to be honest here and say that I breathed a huge sigh of relief when I saw my name wasn't on the second list. I had a lot of misgivings after the first list was issued, like, why did I do it? And, haven't I always had two feet strongly in the Indie camp? Why would I want to sign away my rights to my first-born? I put it down to a moment of madness and won't do anything like that again. I mean, they might have wanted to change the cover and I love the one it's got; designed by the talented Jane Dixon Smith, to my own brief. I've never submitted to agents, publishers or anyone else for that matter. I love my independence and value it greatly, so can only guess that I had a mild brainstorm, swept along with all the excited participants just to see if it could get past the first stage. 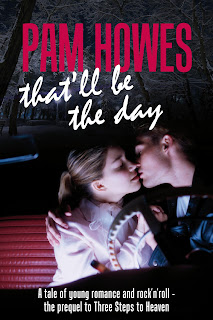 I did my first book launch on Facebook on Good Friday. First time I've ever done one, even though it's my seventh release and maybe something I should have done sooner. I really enjoyed it. Lots of people popping in and leaving amusing and encouraging comments. We had virtual champers and a bit of Rock'n'Roll from Buddy Holly and The Crickets. I accrued many sales and a good ranking on Amazon for That'll Be The Day, within the first twenty-four hours. It's something I'll definitely consider again for the next one, so if it's something you're thinking of doing, I'd say go ahead.

And talking of the next one - I've enjoyed studying Wall of Death videos on You Tube as part of my research. Quite exciting and a change from my usual music based stories. I think a visit to a fairground show will be on the cards at some point in the not too distant future. Until next time, when surely we'll be celebrating a bit of warm weather, take care. Pam. 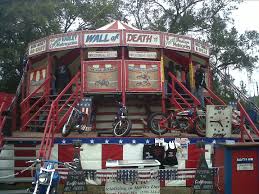 Catherine Czerkawska said…
I agree with you about Goodreads. I'm ON it and I go to it sometimes, but it drives me nuts so I come off it again. I'm sure there are some nice people on there, but I can't find genuine and easy ways to interact with anyone. My blog links to it. I'm still not sure how I got it to do that. Everything is so fiddly and counter intuitive that by the time you've got it to do something, you've forgotten how you did it. It asks me things like the date when I finished reading a book. I always think (a) I've no idea and (b) why would I care? I live in hope that Amazon might employ some decent coders and make it easier to use but I'm not holding my breath!
2 April 2013 at 14:42

Catherine Kirby said…
Glad to hear you're sticking to your independence as a writer Pam. You've always done so well with all your books as an Indie author. I'm looking forward to the next one. It sounds exciting and on a different theme from the others. Good luck with the writing of it. :)
2 April 2013 at 15:55

Unknown said…
Thanks for your comments. ladies. Much appreciated. Glad it's not just me that struggles with Goodreads. My blog also links to it so it would be nice if a few readers commented on how they cope with the mystery of it all. Pam.
2 April 2013 at 17:42