Imagination is a wonderful thing - well, most of the time. By Ann Evans.


T'was the night before Christmas,
when all through the house
not a creature was stirring,
not even a mouse.....


Yes, I know Christmas is behind us now, but this old poem by Clement Clarke Moore was probably the poem that first made me want to write – and that was donkey's years ago.

I remember how those words fired my imagination. I pictured a Victorian household, with snow on the ground, stockings hanging from the mantle-piece, and the delicious aroma of Christmas pudding and mince pies wafting through the house etc etc.

As a child I remember wondering how I could get that imaginary world in my head actually down on paper. Well the writing didn't really start until years later. But whenever I hear that poem it reminds me of how it inspired me to want to write - and how wonderful the imagination is.

Only, last night, the line: not a creature was stirring, not even a mouse jumped into my mind because I think a mouse was stirring in my house.

There I was, happily watching a film on TV, dozing just a little, when something walked across the living room floor and disappeared under an armchair.

It was brown, and it was about half the size of my cockatiel, Georgie, only I didn't see if it had a tail. In fact I don't know what it was, but for the next ten minutes I was stunned, petrified, stupefied and mummified! Even Georgie was alarmed by my alarm, and probably thought I'd gone mad, as I eventually tried to make this unwanted intruder show itself – shove the chair, jump six inches off the floor, shove the chair again, jump six inches off the floor again... you get the picture?

Now I like animals, yes even mice so long as they're in cages or hanging onto an ear of corn in a country meadow on a balmy summer's day. But strolling brazenly across my floor – Yipes!!

So then the imagination took over. Was it just a little mouse that had sneaked in from the garden, or was it in fact a massive spider with short legs? Was it a baby rat? Was there a whole family of them? Would I come downstairs in the morning and find that they'd eaten Georgie? Or half eaten him? Poor George wouldn't be such a pretty boy then, alas.

In my latest book, The Trunk, (a horror story for 12 and 13 year olds) I'd created the most horrendous creature that lived in a trunk, next door to my protagonist. Was this a miniature version that had manifested itself just through my imagination? Overnight would it turn into the fully blown, bone-crunching monster waiting to greet me over breakfast? 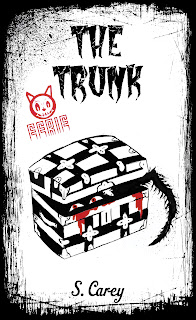 Imagination now in overdrive, and putting myself in Indiana Jones' shoes, I prepared to force this creature out into the open before it was too late. A quick change from PJs and slippers into trainers and track suit with the bottoms tucked securely into my socks and I was ready.

Armed with my trusty vacuum cleaner, I went into action. No stone was left unturned. Then in Sherlock Holmes style, I inspected the floor for evidence of a rodent-type creature – you know what I mean!

And do you know what I found? Nothing! Zilch! Not a sausage!

And I'm starting to wonder now - was it all just my imagination in the first place?

How about you, does your imagination run away with you at times?

Please visit my website (I promise you there are no mice, but you might find a bone-crunching monster or two:  http://www.annevansbooks.co.uk

julia jones said…
Have to larf - I'm guessing you don't live surrounded by fields as we don. What's been bothering me this winter is the ABSENCE of our regular pitter-pattering visitors. I was almost relieved a couple of days ago when I discovered a dirty great rat run leading from the bird table tot he house and then burrowing down ...
13 April 2013 at 09:54

Dan Holloway said…
When I was a student living in a grotty shared house, when we discovered we had a mouse we used to leave little morsels on the corner of the washing machine and soon she was also tame (we called her Jemima). Then again, I run a publisher called 79 rat press for a reason :)
13 April 2013 at 12:57

Author Roast and Toast said…
LOL - I rather like mice myself, especially the field variety, since house mice are not exactly the type of visito you want your visitors to meet if you see what I mean. Ratsies are rather different, although I don't mind the tame variety, but in a dark feed room without any electicity, I'd rather not have them!
13 April 2013 at 21:52

glitter noir said…
Fine, funny read that also shows light on creative brains at work. I really must have a look at your work.

Lydia Bennet said…
I like mice, we have lovely field mice sometimes in our garden and I've often left food out for them and watched one struggle with a bread crust or dig out seeds from it. I even like rats, as Dan will know! Mice have been going indoors more than usual with this long hard winter, so it may well have been a mouse, but an outdoor one trying to get through the winter. But yes, an overactive imagination is something writers have to live with and sometimes it's scary!
14 April 2013 at 15:28