On not being able to write, among other things... Enid Richemont 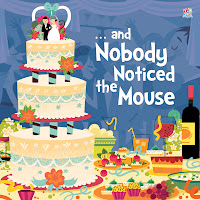 Back in March, before I suddenly took on the totally unwelcome, ugly, and unwished for status of widow, my head was full of ideas, plots, images. My first picture book: '...and Nobody Noticed the Mouse', was due to come out, with TopThat! in September, and a second: 'Quicker than a Princess', had been accepted for publication by the same publisher for some time in 2014. My only other picture book text had been 'DOUBLE DRAGONS', which was really part of an anthology, so I was delighted to have sold two stand-alone stories. Things felt good.

Since David died, I have done no writing except for that single, previous May blog for Authors Electric, which was mostly devoted to him. This will be my second. Writing a monthly blog, I tell myself, is probably a healthy discipline. Whether I can continue doing it remains to be seen. 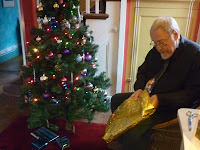 I said no writing, but that's not entirely true. I have been writing letters to my man. This was David at Christmas, opening one of his presents. Christmas will never be the same again. Upstairs, in a drawer, is his collection of all the letters I ever wrote to him, all on paper of course. They go back decades. These electronic ones will never be a part of that heartbreaking clutter - vanishing, eventually, with a simple click of a mouse. I would love to think of him reading them, though, somehow....

So very little writing, but a great deal of reading. I first read Philip Pullman's 'THE GOOD MAN JESUS AND THE SCOUNDREL CHRIST' - hugely readable, as is all his work, but the title puzzled me because the Christ character was no scoundrel - he was simply conned by an angel. I had given this book to David, but had never read it myself.

I then discovered Jamila Gavin's well-known 'CORAM BOY'. We'd picked it up in a charity shop, but to my shame I'd never read it. It is an amazing novel, both moving and poetic, and so cleverly plotted that I was holding my breath right up to (almost) the very last page. To resort to a cliche, my admiration knew no bounds... I've always found endings difficult.

Alan Bennet's recent short stories -  'SMUT' - grabbed me next. His style makes me think of Jane Austen, with his funny, very detailed observations of people, but he takes you to places to which you, and certainly the illustrious Jane - might not have chosen to visit!

Today I bought Philippa Gregory's Y/A 'Changeling' from a charity shop. I couldn't cope with the awful 'White Queen' on the telly, neither the final production, nor the advertising, but I thought I should try reading her.

I'm still struggling with e-publishing my out of print backlist. It's what David would have wanted, but I'm not the brightest button technologically - in fact, I maybe shouldn't be classified as an Electric Author at all, since he did all the work (but I did the writing, though).

If the stage version of Coram Boy is ever revived GO - but take a friend and a box of tissues. We saw it quite by accident in the National Theatre a few years ago and it was the most moving play I have ever seen - probably due to the constant presence of Handels music. I shall never listen to Unto us a Child is Born again without thinking of all those unwanted / starving / murdered infants.
I admire you for having kept all your and Davids letters - have never been sufficiently organised. And Enid this is VERY early days you know. Don't expect too much from yourself ...

I second Julia's last comment. Such a huge event and the unfathomable sadness it generates is bound to overwhelm everything else. Two years ago, my sister's husband died. He was a lovely man and one of my best friends. They met when she was 14 and married 4 years later. He was her entire life. Frequently things happen which make me realise that I still miss him and for her that must be a daily feeling. He'll never be forgotten but today for her the acute pain of loss has been eased by the decades of happy memories they created together. I know this is no comfort to you at present but it's a reminder that time does heal.

I agree with Julia, this is early days. Anyone who hasn't been through the trauma of widowhood doesn't really appreciate how long it takes. I was widowed in 2005, and I couldn't write for a whole year despite the fact I was in the middle of a book. What was equally as bad was that I couldn't read either. I'd lost all my concentration and only managed to read a page at any one sitting. You never really forget the one you've lost, but it does get better, so hang in there.

Chris is right Enid: it will never stop hurting, but it does eventually become liveable with. I spent a lot of time gathering all the snapshots up into albums: I wrote a book detailing all the things I could remember that made Mick special to me - the irritating things as well as the good: and put together a memory box - a load of tat to anyone else, but holding special sentiments for me. And reading can be a balm - I also watched DVDs till they came out of my ears, smoked like a chimney and drank till I couldn't find the bottle in the fuggy gloom. You can't hurry the grieving process - it will take as long as it takes, and you will find your own path through it.
And don't delete those emails - print them off and keep them: each is a special moment.

Yes, print off the emails and keep them! - I've never lost a partner, but did lose both parents within a year. At first, I could only remember them as ill and miserable - I used to go round by strange ways to avoid passing the hospital and nursing home they'd spent their last unhappy days in. Then, one day (as I was manouevering to avoid the nursing home) it occurred to me that their lives hadn't been summed up by those few months. They'd both lived 80 years - they'd had pretty happy, if poor, childhoods, which they'd told me about in detail; they'd been in love and established a long, happy marriage; my Dad had loved to hurtle round the Welsh mountains on his Norton as a young man (my mother was much less fond of the Norton, which sprayed her legs with hot oil), they'd both loved their children... and gradually, my memories of them shifted to these happier times. Eventually, Enid, your memories will too - but as the others say, it can't be rushed. In the meantime, be very kind to yourself, as you would to anyone else in pain.

Enid, I can only agree with the others. Seven years ago I lost my wife. It was a dark, dark time. Now I am as happy as anybody can be. I haven't forgotten that time; in fact I think about it every day. But I came through, to what I have to say are proving just about the happiest days of my entire life.

My grandmother once said that every moment of grief goes to show what a good thing you had. She said she'd rather feel that than indifference.

agree with all those above, do be kind to yourself and allow yourself to grieve, and be angry too, without castigating yourself for not being able to write. it will take as long as it will take. As others have said, the depth of your grief now reflects the happiness you had, for so much longer, and eventually you'll remember that more than the pain of losing him.

I can only agree with what others have said. Widowhood entails a very long grieving period, but eventually the pain does get easier and you remember all the good times and know that they were worth even the pain of loss.

My first husband died suddenly when he was just 35. We had been married ten years and were the world to each other. Things hadn't been easy and just as our future was starting to look rosy, and our dreams come together he was taken from me. I felt I didn't want to go on, and it was the dependency of our beloved animals that kept me going. For a long, long time I could't write, listen to music or even read, but gradually the love of these things came back to me. Everyone is different, and as I said before, it does at least get a little easier with time.

I was lucky and have married again, but I still miss my first husband and always will, but love is not finite and although, at first I felt disloyal, I know longer do because I know he would want me to be happy.

Grieve as long as you must, but I'm sure David would want you to be happy again, in whatever form that happiness takes.