The New Gatekeepers by Mark Chisnell

By Mark Chisnell - June 22, 2013
In October last year I wrote a post called ‘Gatekeepers and Validators’ which was subsequently chosen for 'Sparks, A Year In E-Publishing - An Authors Electric Anthology2011-2012’. The gist of it was that there had been a power-shift in publishing. Twenty years ago, just a couple of handfuls of people in London and New York decided what the English-speaking public got to read. They were the editors, marketers and accountants of the ‘Big Six’ publishing houses, and the book buyers for the centralised bookselling chains. 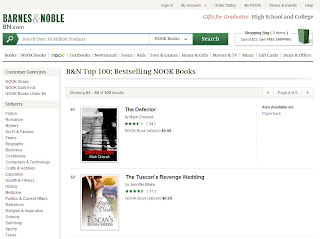 If these people didn’t like a book, then there was precious little chance that anybody would ever read it. They controlled the gates to the front tables of Waterstones, WH Smiths, Borders, and Barnes and Noble. Without their approval and validation - and without a place on those tables - the number of books that an author would likely sell would be counted in dozens, rather than tens of thousands.

This situation has changed completely; Borders has gone, Barnes and Noble looks sickly, Random House and Penguin have merged and any writer that can’t get their work accepted by the big London and New York publishers can go to a fabulous range of new independent houses. Or they can simply do it themselves, via the direct sales channel to the reader that’s now been opened by Amazon, B&N, Kobo, Apple and other online sellers, using a myriad of ePublishing and Print on Demand services.

The central argument of that previous blog is summed up by this passage; ‘The gatekeepers are gone and the doors have been blown wide open - the slush-pile has moved from the in-tray of editors and agents, got itself a cover and a blurb and is now available online for the princely sum of 99p a pop. Or it’s free. Unfortunately, even if the notion of validation by the traditional gatekeepers was just smart business by big corporations, it still leaves us with the original problem. How do we decide what’s worth reading?’

My answer - just over six months ago - was simple; ‘The new validators are the people who should have had the job in the first place – the readers. Perhaps that’s why we are all fast ceasing to care about books getting the imprimatur of a publisher’s imprint. An endorsement of quality no longer needs to come from an editor in New York or London; it can come from five stars on Amazon. It can come when a complete stranger living several thousand miles away takes the trouble to write and post a four paragraph analysis and review of your book on B&N.com.

If a week is a long time in politics, then six months is an eon in the current publishing industry. I think that my earlier conclusion is now starting to appear a little naive... some new gatekeepers are emerging. I mentioned on the comments to a previous post that I might try advertising on Bookbub, as I had heard good things about it. I continued to hear good things about it, and ran a 99c sale promotion for The Defector with Bookbub at the beginning of May. The results on Amazon.com were good, hitting the top #400 on the paid chart. Much more interesting though was the result on B&N.com – a sales channel I’ve never got anywhere near cracking. Bookbub got The Defector into the top #100 overall, and eventually the book topped out at #58 - even briefly outselling '50 Shades...' 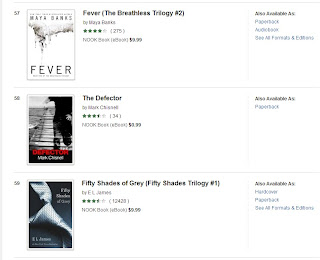 How do they do it? Bookbub is a very simple idea, whose commercial beauty comes from its huge scale. If you go to the website you will be given the chance to sign up for a daily email that will provide five or six suggestions for discounted books. It’s possible to tailor the email to specific genres. An author can sign up to be one of the promotional books in this email for any given genre.

So far, so what, I hear you say... There are probably dozens of websites doing this sort of thing. What makes Bookbub special? Two things; firstly, I mentioned the scale: 1 million subscribers. And the second is that they put some real editorial effort into the books that they promote. If they don’t think it’ll sell, they won’t run the advert.

It's spectacularly effective, but Bookbub aren’t the only game in town. The top end of the ‘Free’ Charts on Amazon are usually dominated by whatever books Pixel of Ink and Ereader NewsToday happen to be promoting that day. Both of these websites are also picky about the books they list, and are also effective at pushing a book up the paid list. BookBub is just the first that I’ve seen that has some leverage at B&N. I suspect that this will soon extend - or maybe it already does - to the iBookstore and Kobo.

A handful of websites are now sufficiently powerful that they can push a book into the sales charts. So maybe these are the new gatekeepers? Fortunately, happy readers are still the only thing that will keep it there...

Connect with Mark Chisnell at:

Pauline Fisk said…
Thanks Mark. Something to think about here. There's a lot I'm not doing and should! Interesting, isn't it, the way that when one set of gatekeepers disappears another lot pops up.

Bill Kirton said…
Yes, my thanks, too, Mark. And if Pauline says she isn't doing enough then God knows where that puts me in the 'could do better' stakes. I take your point about the 'new gatekeepers' but hope that, rather than specialising in keeping the gates shut like their predecessors, they're more interested in opening them to more of us.
22 June 2013 at 10:57

julia jones said…
Always enjoy your posts, Mark. You keep in touch with what's happening and take a truly business like approach - and then you share it. Thanks.
22 June 2013 at 16:28

glitter noir said…
Great update, Mark. Thanks for the savvy tips and your generosity in sharing.
22 June 2013 at 22:58

Mark Chisnell said…
Glad I was some help, and fortunately, the new gatekeepers don't distinguish based on the size of your imprint :-)
23 June 2013 at 17:48