Books, like babies, come when they will... by Rosalie Warren

By Rosalie Warren - July 26, 2013
As I strolled along the beach yesterday, paddling in rockpools and generally being the four-year-old I still am at heart, an idea 'happened' in my head. From nowhere, apparently, it burst upon me and grew into a plan for the sequel to Charity's Child. Not the sequel I've been planning for about two years, which has continually failed to materialise, but a wholly new 'take' on following up the lives of the characters I created in that earlier book. It may have been something to do with the appearance of the rocks at low tide (there is such a scene in Charity's Child, where a big decision is made), or perhaps it was just that I finally relaxed enough for my creative side to wriggle free of all its constraints and start to play again. 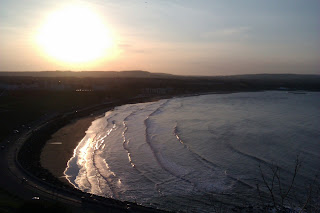 Anyway, here's hoping. It's always dangerous to say too much too soon, and I'm certainly not going to tell you anything about the new book. But it's good to be reminded of the way these things work. Fiction doesn't grow to order, according to schedules and plans. Such things are sometimes needed, of course, especially in the redrafting, revision and editing stages. Sometimes a timetable really is essential, to get things done on time.

But the best ideas, I always find, come when I'm idling. For me, the sea is an enormous inspiration. It reminds me, apart from anything else, that I'm pretty small and my books don't matter very much. This a a wonderful release, because I no longer have anything to prove. It's the story that's important, and the characters in it, and my job is really just to listen (in some sense) and  record. And to find out what's going to happen next to these people - something I've wanted to know for several years.

Books, like babies, royal or otherwise, come when they will. Of course the parallel can't be stretched too far. Quite what it would mean for a book to be induced or delivered by Caesarean, I struggle to think. My son, born 33 years ago, turned up two days early and had a fairly protracted birth. My daughter, two years later, took her time and arrived 13 days late, following a large bacon and egg fry-up (perhaps a mistake...) and a trip out to vote.

Wishing everyone happy holidays, whether home or away, doing whatever is your equivalent of paddling in rockpools and giving your creative side the chance to creep out from under its pile of seaweed and start to flourish.

CallyPhillips said…
Hi
Good to see you are back in the creative groove! Look forward to the fruits of the labour.
26 July 2013 at 09:44

Kathleen Jones said…
Winnicot had the theory that all creativity is really just play. I think he's probably right! Glad you got the idea for the sequel - they're always tricky.
26 July 2013 at 11:49

Bill Kirton said…
Your post complements beautifully the previous one about Susan's daemon. I'm battling with a sequel of my own at the moment. The previous book ended on a lovers' kiss so what the hell have they been doing in the year since then? If it were set in 2013, that would be easy (and she'd probably be pregnant) but this was 1841. Like you, though, I'm finding that resolutions arrive when least expected (or when my daemon stops by).
26 July 2013 at 12:34

Jan Needle said…
ros, i've been doing my equivalent of rock pooling for the last few days - sailing a boat around langstone harbour. i'm happy to say i had no inspirations at all, except perhaps that northern bitter is infinitely superior to southern, but then i knew that already. i'm happy for you, though.

incidentally, my mental age is, and always has been, about eight. anybody else prepared to throw away their reputations as mature, sentient, creatures?
26 July 2013 at 15:39