By Sandra Horn - December 20, 2013
Dear old Rudyard...largely out of favour now, and thought to 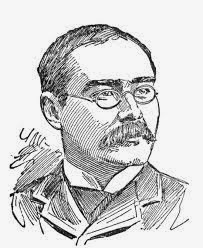 be a tad jingoistic - which he was, of course, but very much of his time. He must have suffered all the torments of hell when his son, who had poor eyesight, was killed in action after Rudyard had pulled strings to get him into the army after he'd been rejected. I don't know what his own eyesight was like, but his study at Batemans's in Burwash (pronounced Berish by the locals) in East Sussex, is a really dark and gloomy hole. There is an enchanting meadow of snakeshead fritillaries outside the house, although I don't know whether they were growing when the Kiplings lived there. I like to think so.
I didn't read his locally-set books, Puck of Pook's Hill and Rewards and Fairies, when I was young, but they have delighted me as an adult and they were lurking somewhere at the back of my mind when I wrote The Hob and Miss Minkin stories. I think of him quite often, as lines of his poems tend to run in my head, especially when I'm in my native Sussex. He's my mother's favourite poet for his adulation of the county - the spot 'beloved over all'. He watched and celebrated the characteristic colours of autumn on the Weald and over the Downs - the 'hop-bine yaller', the 'woodsmoke blue'; he wrote of the 'dim blue goodness' of the Weald, and of the 'whale-backed' Downs; all familiar and loved parts of my childhood landscape.
Now, here's a thing: we were driving through the said beloved spot a couple of days ago, along the Downs, and I was thinking 'whale-backed', as I do, when I suddenly saw them in an entirely new light - as sensuously-strokeable flanks. I could feel my hand become giant, and cup the rough turf, sliding down with the firm touch one might use if grooming a horse. It was very enjoyable, if slightly unsettling. Where did that come from? God only knows, but odd things do happen to thoughts (mine, anyway) when one is driving, or being a passenger, on longish journeys. I dreamed up the beginning of Goose Anna on the way back from Cumbria one time, and Niall, my significant other, once suddenly said 'You should make The Silkie into an opera,' out of the blue, somewhere down the M4. So I did - at least, I wrote a libretto for it. Still hoping for a composer one day.
Stop rambling, woman, and get back to Kipling. I wanted to put something a bit Christmassy in this blog, as it is looming so close. I haven't finished writing cards and this is the last posting day, but I'd rather blog, so there. Here is Kipling's Eddi's Service, written about the chapel at Manhood End - an interesting name. Worth a ponder. It is, or was, an out-of-the-way place, and I'll just chuck in that legend has it that Sussex was one of the last places in England to be Christianised, what with all the woods people could rush off and hide in whenever the missionaries came round. Some people might think it's still a bit iffy. Did I mention that I grew up there?

Eddi, priest of St Wilfred
In his chapel at Manhood End,
Ordered a midnight service
For such as cared to attend.

But the Saxons were keeping Christmas,
And the night was stormy as well.
Nobody came to service,
Though Eddi rang the bell.

'Wicked weather for walking,'
Said Eddi of Manhood End,
'But I must go on with the service
For such as care to attend.'

The altar-lamps were lighted -
An old marsh-donkey came,
Bold as a guest invited,
And stared at the guttering flame.

The storm beat on at the windows,
The water splashed on the floor,
And a wet, yoke-weary bullock
Pushed in through the open door.

'But - three are gathered together -
Listen to me and attend.
I bring good news, my brethren!'
Said Eddi of Manhood End.

And he told the Ox of a manger
And a stall in Bethlehem,
And he spoke to the Ass of a Rider,
That rode to Jerusalem.

They steamed and dripped in the chancel,
They listened and never stirred,
While, just as though they were Bishops,
Eddi preached them the Word,

Till the gale blew off on the marshes
And the windows showed the day,
And the Ox and the Ass together
Wheeled and clattered away.

And when the Saxons mocked him,
Said Eddi of Manhood End,
'I dare not shut His chapel
On such as care to attend.'

Happy Christmas, everyone. Joy and Peace for the New Year.

Unknown said…
Kipling was a contemporary of S.R.Crockett so I've been seeing something of him round and about over the last year. Maybe when The Galloway Collection comes out I can point you in the direction of the Kiplinesque in Crockett. Something new from something old. Can't be bad.
20 December 2013 at 12:42

julia jones said…
I think Kipling's a really interesting writer as well as complex personality for whom I feel great pity (if that's not condescending.) Jeremy Paxman read that poem on Radio three this evening -sentimental, maybe but touching too
20 December 2013 at 21:26

Dennis Hamley said…
Indeed, Kipling is still unfairly derided. After all, he was a man of his time. Future generations may think we're a bit weird too. But he was a consummate storyteller and poet who I still enjoy. I agree about Batemans though: all that dark wood panelling in every room does instil a sort of gloomy foreboding.
21 December 2013 at 09:42

Nick Green said…
"If" is only derided because it's overplayed, like James Blunt. It wasn't cliche at the time, of course. And it's often misinterpreted. It's not a set of rules for being "a man". It's a set of impossible ideals that one can nevertheless aspire to, and magnificently fail at.
21 December 2013 at 11:56