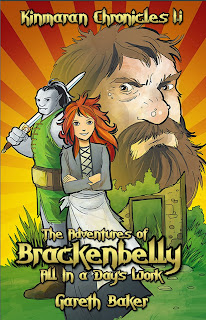 Today is the last day of 2013.  Is it just me or has this year flown by? Traditionally it’s a time for looking back on the year that’s been and to look forward to the year to come.  This has been my first year as an “Indie” and I’ve learned a lot. I could tell you all about what I’ve learned about writing and editing, but I expect you have heard all that before.  Instead I’m going to tell you about the importance of covers and the audience they are aimed at.

I’ve worked with children all my adult life as a primary school teacher, and I think I know children pretty well.  It’s a key requirement for being a teacher, don’t you think?  It often surprises me how many teachers don’t know about children’s TV, books, films and toys.  In today’s teaching environment it’s essential to know what’s cool and what’s not. 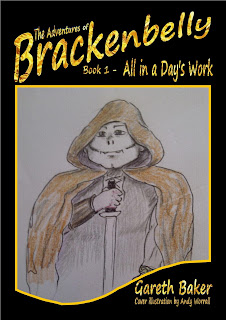 Brackenbelly is the “star” of my Kinmaran Chronicles, a series of fantasy adventure stories for eight to twelve year olds.  This reluctant hero is an outsider and an outcast.  He has grey skin, pointed ears, fangs and is short – measuring in a five foot six.  While my main aim is to entertain, Brackenbelly is there to teach children about respect, friendship, kindness and standing up for what you believe in.
When I came up with the concept of Brackenbelly and the world of Kinmara, I was certain I had an idea that kids would enjoy, and I’d like to think I’ve been proven correct.  There was one thing I got wrong – my covers.  Some of it was due to the resources I had, and some was about knowing my audience.

When it came to make covers for Brackenbelly I had, of course, made matters even more difficult for myself by creating my own world and, more importantly, my own race.  It wasn’t a simple matter of finding a stock image, or even paying someone to create me a cover.  I needed art that was specifically made for me.  The next hurdle that I had was lack of finance. 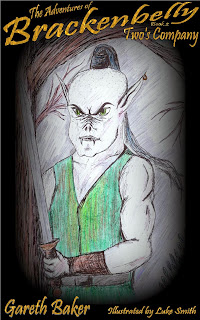 Initially I had friends and even colleagues draw for me and then I used Publisher to create my original “black” covers.   Back in April 2013 I was incredibly proud of what I had managed to create.  Now I’m quite embarrassed and can’t believe I’m even showing them to you. I mean no disrespect to the kind people who helped me; I mean the whole black and gold look.

It wasn’t just my lack of design skills that was the problem.  Looking back now I can see there were three reasons for the poor covers and they were my entire fault. Firstly I wanted Brackenbelly to look a little frightening.  It was a vital for the message that I wanted my books to pass on. Brackenbelly is a hero and the kindest and best friend you could ever have, even though he might look frightening.

The second was they were too drab. As far as the clothes were concerned, this was what I wanted as, again, it was a vital part of the story.  Brackenbelly is poor and I wanted his clothes to reflect this as well as the uma’s connection with nature.  The black was all wrong though, but the main reason for this was because the art I had was of Brackenbelly only and not a full picture. 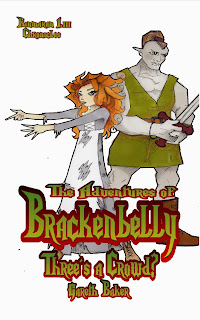 The third was the quality of the art itself.  I would like to point out that all my past artists know that there work has been replaced and were very gracious about it.  They want me to succeed and knew that a great cover was the key.

The turning point came in October when I had a stall at a local book fair.   I was selling the paperback versions of my books, and it went quite well.  As children were buying them I noticed a couple of things.  Of the three paperbacks I had that day, it was always Three’s a Crowd that the children picked up.   It didn’t take a genius to work out the reasons.  Clearly the quality of the art was better than the other two, but I think it went deeper than that.  The other obvious difference was that it had Isomee on the cover.  Most of the children who bought the books that day were girls.  The cover also had a little more colour.

At this time the fourth book, No Good Deed, was almost ready to be published and the cover was drawn and ready.  Fortunately I had already realised the importance of the animal characters in the story and Jake and Bramble were on it, but no Isomee. 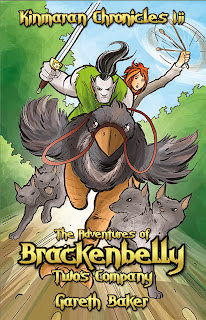 Then I had the good fortune to run into illustrator Chris Askham.  He had been recommended to me before by one of my early proofreaders, but at the time I couldn’t afford to pay anyone. The time had come to take the plunge.   I passionately believe that I have a story that children (and adults) will like, but they won’t look at it if they don’t like the cover.   When I met Chris I knew right away I was on to a winner.  He was into comics like me and he understood my desire for dynamic poses full of energy.

As I write this, he has completed the replacements for the first two books, All in a Day’s Work and Two’s Company.  By the end of January we’re hoping to have the last two ready and then we’ll forge on with the fifth book in the series. As well as the new art, I’ve also revamped all the lettering and used the same font for some parts of the paperback edition. The paperback have a back cover too, of course, and again I’ve tried to add more colour to them.   They are still a WIP, but I think I’m slowly getting there.  The paperback editions also include maps, a cool font and scroll decorations on each page.  The Kindle versions may be cheaper, but you don’t get the full experience of the world of Kinmara.

In March I’m doing another public appearance to sell paperback versions and I can’t wait to see children’s reactions.  Money’s nice, but at the end of the day I write in the hope that other people will enjoy my stories.

If children’s literature or fantasy isn’t your thing, I’ve also written a crime thriller for adults set in Nottingham, where I live, under the name G Mockford.  Creating the cover for it was a much simpler process, but I recognise it could still do with a “professional” polish.   I took a photograph of a local landmark and then used lettering. Where Wolves Fear to Prey is available from Amazon, as are all my titles. 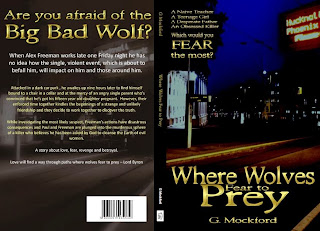 Tomorrow will be 2014. I’ve looked back, now it’s time to look forward.   My New Year’s resolutions are to lose weight, blog more and start the second Rees and Stokes thriller.

I’d like to wish you all a Happy New Year and all the best for the next twelve months.

If you’d like to know more about me, or my books, please take a look at my various social media links, my blog and my website.

Yep, it's hard getting a cover right isn't it? :-) Good luck with your public appearances!

I do like your new covers, they're really vibrant.

Spot on, Gareth. It's something I've been concerned about for a while and it was brought home to me in October when I gave a writing workshop for 10-12 year olds. It was in a library and, at the end, one girl asked 'Is that your book on the shelf upstairs, The Darkness?' I said 'Yes', pleased that she'd noticed it. She then replied, very sweetly, 'The cover's rubbish, isn't it?' and proceeded to tell me why. Out of the mouths of babes, eh?

Was she right, Bill? When you looked at it with her eyes? :-)