You want it when?


I've written for horsey and dog magazines for many years now and as well as teaching me (amongst other things) how to write to length, I've also had to meet Deadlines.

I'm pretty good at them actually - and the tighter they are the better. I grumble, but rather than sinking beneath the pressure, I rise like a bird to meet it. I'm used to editors ringing me up and asking for an article on a certain subject and then apologetically saying that they need it in a hurry. I've had a few commissioned books come my way like that too.
No problem: I work best when under pressure.

Admittedly, it has caused a certain amount of domestic friction in the past, when I've closeted myself away to work through  long evenings. When I was on my own, working through the night, whether on an article or at the printers putting the magazine I edited to bed wasn't an issue. But when I moved in with my partner, there were times when he got cross about it. I remember one tight deadline, for a booklet I'd been asked to write on herbs and horses: 10,000 words and calling for a lot of research - in those days there was no internet. Mick got cross about the inordinate amount of time I was spending in my tiny study, surrounded by tottering piles of books and feverishly typing.
When I pointed out the impending Deadline, he was unmoved. When I told him that the job was worth £1000, he rather more cheerfully pushed me back into the study and brought me cups of coffee at regular intervals ...
By the time we moved to our current house, he'd given up fighting the antisocial aspect of The Deadline. Instead he built and set up a work station for me in the corner of the lounge/dining room so that we could at least still have each other's company of an evening.
With the advent of e-publishing, I can now not only write what I like, but in a space of time not constrained by mad Deadlines. But the point is that I actually like Deadlines. They help drive me.
And that is the problem. In this post I was really hoping to be writing about my next book, Living the Dream and the story of how it had developed from a short story. But while I'm good at meeting Deadlines, it turns out that I'm only good at meeting those imposed by other people. It looks like Living the Dream will now be out after Christmas rather than before it, as I'd originally planned. When Deadlines are my own self-imposed ones, it turns out that I'm pants at sticking to them ...  How do other people cope?

In the meantime, you can always read The Great Rosette Robbery and Haunting Hounds - or visit the website for Living the Dream - and of course, don't miss the great Authors Electric giveaway over Christmas! 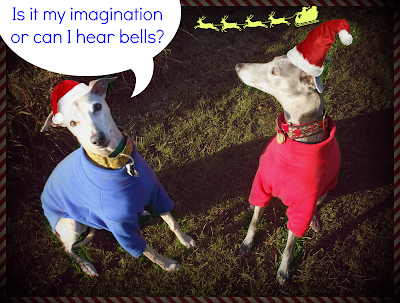 No indeed! 14 days to go until Christmas and the Authors Electric sack of goodies!
Posted by madwippitt at 00:05

Email ThisBlogThis!Share to TwitterShare to FacebookShare to Pinterest
Labels: deadlines, domestic friction, epublishing, It Only Happens in Stories, Living the Dream, watchdogs

Absolutely, Karen - you nailed it!! I am the queen of procrastinators. Deadlines bring me alive - I write lectures the night before I'm supposed to give them, hardly able to type for terror, and deliver books and articles at the final second of the countdown. But my own stuff? Should be finishing the edits on a novel as I type this .......

Oh yes. I know all about the unrealistic (optimistic?) self imposed deadline too. I can do it when somebody else sets the deadline - I just get my head down and get on with it. But I was planning (ha!) to get the sequel to Orange Blossom Love out in time for Christmas and it isn't going to happen. I now have Valentine's Day as an appropriate second deadline, but I'm not holding my breath!

The more blogs like this I read, the more I think I probably am a writer after all - they describe such familiar experiences. Except that I couldn't write anything with another person in the room, even if s/he was a coffee dispenser.

yes deadlines are great. I always beat them but need them. The main advantage of doing a Creative Writing MA was that it made me get on and do the work rather than prioritising family stuff instead all the time.

Hmmm ... so somewhere out there is The Greatest Book Never Written!