Painting with Gossamer by Dan Holloway

So, wow, the move is finished. At least, we have moved. After 6 skips, 5 weekends of rental vans, 2 days of Pickfords and 3 storage units. Now comes the unpack – before we single-handedly fund the whole of Big Yellow.
But at least I have enough headspace back to start to write again. To write enough, in fact, that I’ve re-released in completely edited and re-curated format, my first – and probably still best – collection of poetry and prose, (life) razorblades included.
I was prompted to revisit this book, best summed up as a book that celebrates life by writing about death, following an increasing online debate in the past weeks about the use and appropriateness of trigger warnings for sensitive material, material that may trigger flashbacks or other symptoms in those suffering PTSD and other conditions. 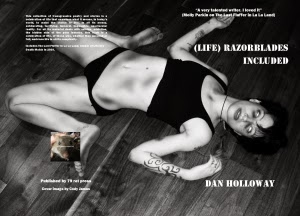 Much of the material in razorblades has been, at times and a much as anything by a no mark like me ever could be, controversial. In particular the opening scenes, frank imagined conversations with those in the process of killing themselves. Suicide has been a constant theme in my writing, as it has in many of the books I love most like Cody James’ or Murakami’s Norwegian Wood. And it’s something I’ve always refused to “take a stand” on in my writing. I often write about characters who are in some way too fragile for the world, too bright for the darkness, too beautiful for the ugliness, too precious for the baseness. All too often those characters find themselves slowly weighed down, crushed breath by tiny breath until the darkness covers them over. Suicide, for those characters, is several things. A means of retaining dignity, the inevitable response of a world too sick to cope with their blazing light, the inevitable response of those too tiny, frightened and a lone for the sheer size of the universe.
Much of what I write on the subject is based upon experience. My own, and that of those I love and have loved through the years. The strand that runs through much of the way we talk about suicide is the same as that which runs through our dialogue on mental health, only writ larger. There is a desire to leave the subject untouched, a fear of saying the wrong thing, a wish not to upset, not to disturb the surface of society. And so we remain silent, or we take a stand, make it clear that “suicide is not the answer”, and so we can all sleep more clearly, safe in the k knowledge we have not contributed to the darkness.

Only in many cases such well-meaning positivity can do untold – and, sadly, immeasurable and so unverifiable – damage. For every person not tipped over the edge by an account of suicide that avoids overstepping the line, how many more lives are lost to their own loneliness because there is no hand held out to them in the night?


It has always been my determination never to judge in my writing, but in this book especially I wanted to tackle, for the sake of those beautiful, fragile lost lives, the subject of suicide head on. I wanted to create a voice that would speak to those who felt there was no one experiencing what they did, who needed to know that someone understood, who needed to know that not everyone will tell them “it will get better.” Because sometimes it doesn’t get better. Sometimes life is a battle against that fact. And sometimes that battle is lost. And that is no one’s fault. And as writers sometimes we have to tell truths like this.
Posted by Agnieszkas Shoes at 00:05

"Painting With Gossamer" - I love that.

Yes, sometimes the only chance at healing is to go in deep and close, tell the truth, let light in to the wound...

Don't know what you think of A. Alvarez's study of suicide, Dan, The Savage God?

Or the literary treatment of it, in Steppenwolf...or Stavrogin's "logical suicide" in The Devils...

Somehow, though, it is the idea of the isolated individual, crushed under that overwhelming weight, as you say, that is the most terrifying...

And that isolated individual may not seem isolated at all...I remember reading a James Herriot story, and it was about a very very cheerful man, always happy it seemed...who without warning committed suicide...no-one ever knew why...and it seemed the ghost of that always-happy-seeming man who had never expressed his pain haunted Herriot...

No, more often than not it doesn't get better - but that doesn't imply any sort of right or wrong. The body tends toward an end and as living things, we have an innate understanding of this, even if it horrifies us.

For me, the decision not to end my life (on those occasions where it was a real possibility) came about as I found a way around myself. Suicide is such a self-involved thing, of course. Even if thoughts are twisted around a tree of others - their actions, in-actions, etc - to focus on suicide is to focus entirely on the self. When I turned my focus back on those who couldn't possibly save me, the light came on.

To spare what time we have for others is the only detour from suicide I know of.

John, thank you as always for opening up a whole new seam of reading for me.

DJ - I think it's that lack of right or wrong that I want to try to focus on in what I write, not just on this subject but on most parts of life. Too many writers have too much of an obvious opinion on things and their characters bear that weight. Of course we can never write from neutral, but we can do what we can simply to describe.

There have been a lot of art/poetry/writing of various kinds in/for hospitals over the last decade or so, and it has to be said there's often a lot of pressure to write 'inspiring' or 'cheering' stuff, which is just right for some people: but some research I read about showed that for some people it makes them feel worse to think they 'should' be cheering up, and what helps them the most is someone who feels like them or understands how they feel and can express the painful or depressing experience. Dan, you never rest on any laurels, always seeking new ground, new challenges and taking risks.

I absolutely find that - when I am at my lowest the last thing I want is uplifting because it feels utterly unobtainable and that sends me further down. I wrote a piece for the Guardian about the importance of bleak books http://www.theguardian.com/books/booksblog/2013/feb/04/depression-bleak-stories-consoling-self-help

A friend of mine (who is a brilliant, trade published writer) has just had a memoir about losing a baby turned down because the publisher said it would be 'too sad' for people to read. But it's actually quite uplifting and would be a comfort for families who have lost children to know that there is a way through it. 'Bleak' books are important. When you're in grief 'cheering up' is just what you can't cope with!

I have a fridge magnet like a Penguin paperback cover, its entitled Don't Let The Bastards Cheer You Up, people laugh at it but when I bought and put it there I so meant it. It still makes me smile.
I read Al Alvarez' book on suicide when younger and found it self indulgent - I wonder how I'd react to it now? His books on editing are marvellous and I really relate to them.

Publishers will never learn, will they!!

That sounds like exactly the kind of thing I'd have on an "inspirational" poster!