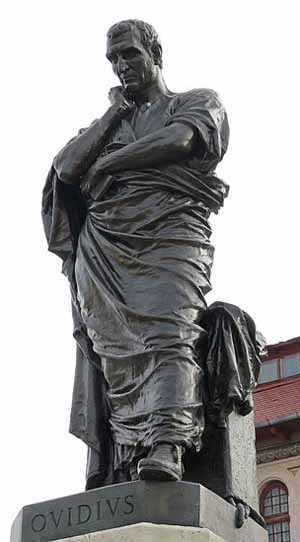 That's my boy there: Ovid. The dullest of all Roman writers, I thought. Two pages of The Metamorphoses could put me to sleep for two nights--and the terrible Penguin translation could knock me out for a week. Samples of my torment:

A.D. Melville, 2009
Of bodies changed to other forms I tell;
You Gods who have yourselves wrought every change...

Arthur Golding, 1567:
Of shapes transformde to bodies straunge, I purpose to entreate,
Ye gods vouchsafe (for you are they ywrought this wondrous feate)...

Iambic pentameters, rhymed and unrhymed...blank verse...prose--I never could get past the opening account of Creation--because I could not feel the once-living presence behind it. And because I had no sense of Latin as a once-living language. What the heck was the fuss about Ovid?

Well, one day at Atlanta's Oxford Books, I chanced on a new translation by an academic bad boy known as David R. Slavitt:

Bodies, I have in mind, and how they can change to assume
New shapes--I ask the help of the gods, who know the trick:
inspire me now, change me, let me glimpse the secret
and sing, better than I know how, of the world's birthing...

Not only did I get past Creation, I knew I was on to something wild and blasphemously different when a god spies a fleeting nymph and calls out: 'Well, hello there, cutey!' In years to come, I'd meet and talk with academics who loathed David Slavitt. They'd allow him points for successfully adapting the hexameter to English. ('Longfellow's Acadian jog-trot,' he'd written, 'sounded to my ears like a bell-bouy.' His goal had been 'to give some sense of the formality of Ovid's Latin, that constraint he could tighten or relax as the rhetorical occasions prompted.') But they despised him for two reasons:
1) The respected academic had written several steamy bestsellers under the name Henry Sutton--The Exhibitionist sold 4 million copies. Worse still, he'd done the talk-show circuit.
2) His sometimes flamboyant translations took too many liberties with the original texts.

But no one had to tell me that the word 'cutey' hadn't existed in old Roman times; nor could the poet have actually said '(Her dance) would give Hippolytus a hard-on'. And I'd allow that the modified hexameters were not the same thing as the Latin. Still, for the first time in reading the classics I'd gotten a sense of real fun, vitality--while feeling a dead language come back to life. And I came to see how, in translation, the accuracy of an impression can be more important than a literal translation--and that the effect need not always be rendered at the precise location. Try this, from Slavitt's translation of Ovid's Remedies:
Your body is utterly weary. You wonder why
this rumpy-pumpy business ever seemed so important.

Now, Ovid was fond of his word play and may have used, elsewhere, something like 'rumpere-erumpere'. Slavitt echoed it here, where he could--and I, for one am happy.

Similarly, in Love Poems:
Let him find traces sometimes of another man's
presence--the presents
the competitor has sent...

The playful doubling of presence and presents doesn't stray from what I've seen of Ovid in Latin. And when Slavitt uses 'babe' or 'dame', we're getting an impression of the cheekiness and naughty wit that got Ovid bounced out of Rome.

The last book is a brilliant defense against Nabokov's insistence that poetry can't be translated. The author suggests, in fact, a translation that does Pushkin's Eugene Onegin proud.


P.S. Rumor is that David R. Slavitt is hard at work translating Horace, who may have finally found the right match.

"Now stands my task accomplished, such a work
As not the wrath of Jove, nor fire nor sword
Nor the devouring ages can destroy".

Nothing, that is, except a bad translation! They make me scream too Reb.There's two kinds - the literal prose version that gives you the meaning, but not the feel of the original and the complete rewrite that recreates it (and takes liberties!) Some of the latter work very well - I liked Seamus Heaney's Beowulf (I was an Anglo-Saxon major) and am currently sampling Stephen Spender's translation of Rilke's Duino Elegies (sumptuous but idiosyncratic).
Have you tried Ted Hughes version of Ovid? Or the new version by DAvid Raeburn? Maybe that was the Penguin one you loathed? Must try the Slavitt.

Love the photo of him by the way - he doesn't look like someone who once knew Zsa Zsa Gabor!!

How I agree, Reb. A Guardian critic once dismissed, not in print but to my face, my miracle play translations as 'doggerel.' I was too awed then to complain but now I'd just ask the twerp to explain why an attempt to capture the spirit of the Wakefield Master in language kids could make sense of while keeping the extraordinary rhythms and forms of that amazing unknown dramatist intact should be insulted and dismissed by such a hidebound, unimaginative purist even if he did write for the Guardian.

Totally agree, Reb. If I have to read something in translation (and I frequently do), I want it to be readable and fresh. I've done some translating from French and always tried to keep as close to the original as possible, but not if that produced something so awkward that it might distance the reader (or, in the case of Molière, the audience). It's not just a question of translating words but of transposing a culture.

By the way, Kathleen, I thought the Hughes Ovid was fantastic.

I must say I always found Ovid the easiest Roman poet to read anyway (in his approach to the mythology of the times, his closest modern parallel might be Terry Prachett, only racier). But most translation did lose the poetry.

Ted Hughes's version is just stunning, I agree. Effortless reading. For me Hughes is the master of language, a seer, and if Ovid's ghost chose to possess any poet it would probably have been him. One can only imagine their conversation in Elysium (or Tartarus, maybe).

My feeling is that it takes one poet to translate another.

Thanks for the feedback, all. I'll be sure to look into the Hughes and Raeburn versions. Dennis, sound like you ran into one of the Slavitt-hating Gnomes of Academe. Lee, I agree with you that only a poet is up to the task. Nabokov went on for a thousand words arguing that a shade of red referred to by Pushkin could not be translated as red or crimson but only as, say, vramooshka, which came from a then common dye unique to Leningrad and Moscow. I'm content to settle for red, aren't you all?

Update re suggestions: Checked out the Hughes selected translations and was blown away. Will order later today. Return also looks well worth a read. Thanks again!

BTW, Reb, I'm partial to the Mandelbaum translation but will now have to have a look at the Hughes. Here from M.:

My soul would sing of metamorphoses./But since, o gods, you were the source of these bodies becoming other bodies, breathe/your breath into my book of changes: may/the song I sing be seamless as its way/weaves from the world's beginning to our day.

Yes, Lee, I remember now the Mandelbaum translation. I found it shortly after reading Slavitt--and enjoyed it immensely after Slavitt had corrected my thoughts about Ovid being dull.

what a refreshing post Reb, lovely to have Latin on AE! The Roman poets used both filthy slang and elegant academic allusions in a glorious mix, Ovid is a bit saucy and Catullus is way more rude both in subjects and in vocabulary. Of oldish translations, I like Virgil's Aeneid translated by Cecil Day Lewis, poet laureate whose direct descendant is Daniel DL of film fame. Slavitt sounds like fun!

Thanks, Lydia. I remember the Lewis translation of Virgil. He made a brave effort to capture the original meter--and for the first time I read Virgil with genuine delight. Catullus was the first of the Romans I loved--the scatological poems, of course. Years would pass before I learned why he'd earned the title Doctor for his other verse--and before I came to see the artistry in even his 'punk' verse. Have you read Pound's experimental translation of Propertius?