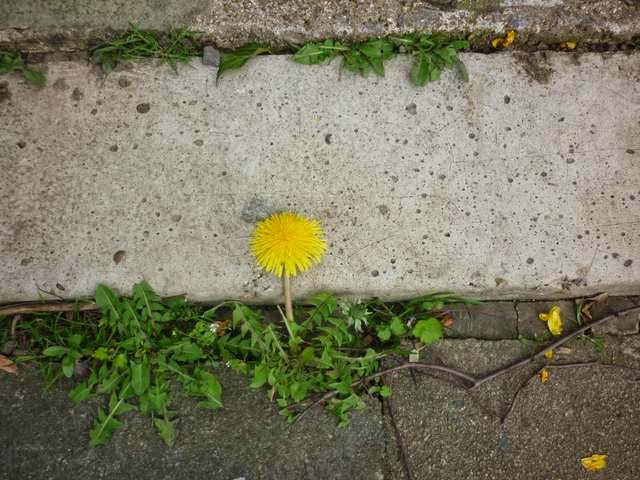 The other day, I noticed that one of the tiny dandelion weeds that had rooted themselves in a crack in the pavement adjacent to my front step had unexpectedly flowered, and the sight of it filled me with such joy and tenderness that I photographed it. The image has come out at an odd angle - the paler grey is actually the horizontal of the step, but here it looks vertical.

Why is there so much folklore around the dandelion? Like many kids, I used to be told by my mum that if I picked them I would wet the bed, and there is, I believe, some truth in this, as I think dandelions as herbs have been used as a diuretic, in which case, might eating it in a salad, or enjoying a bowl of dandelion soup, have a similar effect? I love its original French name: Dent de Lion - lion's teeth .

At present I've been reading Ayaan Hirsi Ali's fascinating, knowledgeable, and very scary book: "HERETIC" If you haven't yet heard of her, she's a Somali woman raised as a strict Muslim, who managed to escape from an arranged marriage in Canada to end up in Holland, where she worked with the controversial film-maker Theo van Gogh. After his murder, and following death threats to herself, she settled in America, where she now writes and lectures on Islam.

I have learnt so much from this book, but then I did begin from a pov of almost total ignorance. I had no idea, for example, that the holy texts of Islam are totally based on an oral tradition - they are learnt by heart and recited (much as The Iliad must have been) - and that they are assumed to be the actual words of God, so no discussion, argument, disagreement or editing can be possible (cf extreme versions of Christianity and possibly Judaism). Christianity is self-critical - we did have a Reformation. Islam is not, and cannot be.

I have no religion, although, yes, I've been there and done that, but what strikes me about religions generally is their immense power of story-telling. We are a story-telling species. We invent supernatural beings who reflect ourselves, and then weave stories around them. The Greek myths are timeless and a joy, because they  reflect our own passions - jealousy, hatred, desire, sexuality. We've always chosen to have leaders - kings, dictators, nasty, good, wise, immoral (we tend to despise the weak ones) - so creating a single Super-god who is infallible is just one logical step further.

In my Middle Grade fantasy novel, first published by Walker Books and now an e-book: "THE ENCHANTED VILLAGE"  http:// www.amazon.co.uk/dp B008S3BOTE , a group of offended Greek gods descends on a small Cornish village demanding "Respect, man!" They even control the weather, enclosing the area in a balmy Greek heatwave (well I needed them to do that because my daughter was due to have an outdoor wedding at the time, and Cornish rain is something else), and once again the ancient story of the goddesses and the apple is re-played. You can find out more on my website: www.enidrichemont.org.uk

Regarding my daughter, she and her colleagues have recently succeeded in getting a Leicester Square premiere for the low-budget movie they've been developing for the past few years. It's called "TIN" (tinmovie.com) and based on the tough 1890-1900s Cornish tin mining industry - starring Jenny Agutter (she of "Call the Midwife" TV fame). Jenny lives part time in Cornwall, became involved with the Cornish theatre company 'Miracle', and things grew from that connection. Do try to see it if you can - it's extraordinary. This is me at the launch party in the Empire Cinema, Leicester Square. The image on the right is with Jenny Agutter.

Bill Kirton said…
Fascinating, Enid, and congrats to your daughter on her coup. Re. dandelions, I have 2 snippets to offer. I assume you know the first, i.e. that the current French term for them actually celebrates their diuretic qualities - it's pissenlit. The second was the surprise I felt once when holidaying on Crete and seeing a man carefully tending his rows of dandelions, watering and weeding them. I'm afraid I don't have a comment to offer on religion. Most of it makes me angry.
28 April 2015 at 09:44

Enid Richemont said…
Pissenlit - yes, I should have mentioned that one, Bill, so thanks for reminding me. And I love your Cretan story.
As for religion - you will be even angrier if you read Ayaan's book.
28 April 2015 at 11:53

Susan Price said…
More congratulations for your daughter, Enid. That's quite an achievement.

I agree with Bill about religion - but 'not possible' for Islam to be self-critical? Of course it can be. It was once a very tolerant religion - when Christianity wasn't - and it could be again.

The Bible was once oral history, and was once claimed to be the absolute word of God, not open to question, but it was questioned.