By AliB - December 22, 2016
Christmas is all about tradition, isn’t it?  And ever since I had to give in to my in-laws’ edict that presents were opened after lunch (outrageous!) I’ve clung on for dear life to the remnants of my Yuletide habits.  So on Christmas Eve, while the family settled down to Cool Runnings or Home Alone, I’d be in spendid isolation in the kitchen, soaking up the traditional beauty of Carols from Kings - most likely with my hand up a turkey's backside. Yes, for me Hark the Herald is synonymous with an oniony tear in my eye. Oh well, it's traditional.

Long before Christmas Eve, I'd be chuntering on about how the sideboard was constantly littered with bits of tin-foil and cardboard, and how advent calendars were meant to be about the nativity. When we got more space I insisted on only ever having a calendar WITHOUT CHOCOLATE (not an easy thing to find let me tell you.) Selection boxes on the other hand were fine. We had them every year. They were traditional.

But this year something odd has come over me. It began with the Christmas pud. Having decided to buy one (my recipe always yields enough mixture for two large puds and a bit left over for the food-bank - except they prefer toiletries or tinned stuff) I went online to check out which were the best buys.
To my disgust, the top choice on the first site I visited was an M&S chocolate and orange version. I rejected this straight away and went off in search of something full-on fruity. But somehow that choc-orange pudding stayed in my mind. How many of our company of eight really liked the brandy-soaked version? And a non-traditional dessert would take away the need  to provide the ‘alternative pudding for fuss-pots’ which takes up space in the fridge and hardly ever gets eaten. Then there was that M&S voucher hiding in my handbag. Before you could say ‘citrus sauce included’ the deed was done.

And this pesky pudding proved to be just the beginning. After buying an advent calendar for our (non-resident) daughter I hinted there was a chocolatey gap on our own sideboard.

‘But you don’t like advent calendars,’ said Mr B.
'Actually, I said. exercising my full female prerogative, 'I think I have changed my mind'.

And you know it is quite fun to dig out a smidgeon of chocolate as you count down the days.

So was that the end of my Yuletide volte-face? No, not a bit of it. Since we moved ten years ago to our newish estate we’ve grown reluctantly accustomed to the December blingfest:  the garish lights,  the blow-up/collapsing Santas, the oddly illuminated hedges and gables. Some of them we pause to admire for their relative tastefulness. But have lights ourselves? Good grief, what an idea! Yes, that’s our house over there, the one in Stygian gloom. Outside lights are so not our thing.
But this year I found myself curiously uplifted by the appearance of the twinkly season and dispirited by our dark door. So it was highly gratifying to drive our daughter home a couple of nights ago and have her practically jump out of her seat as we rounded the corner – Mum, you have lights!!
I have to say it’s a very modest affair, but everybody has to start somewhere.

So what does this teach me about tradition?
Lesson One:  Not all traditions are good traditions. Selection boxes were designed for the post-rationing decade. They had everybody itching to open them before breakfast and thoroughly nauseous by mid-day. We are no longer chocolate-deprived, we do not need them.

Lesson Two: Traditions aren't set in stone. For our (grown-up) kids, Christmas isn’t Christmas without at least one viewing of The Snowman. But there will come a time when their own off-spring adopt something else as a Christmas favourite. Thinking back to Meet the Kids with Jimmy Savile (ouch) I have to concede that changes like this can be a good thing.

And finally: All traditions have to start somewhere. This is particularly true of recipes. Where did my Mum find that (pre-Delia) chocolate rum flan recipe which became a Boxing Day staple for at least ten years? Then there was my my mother-in-law’s cranberry stuffing ball recipe, de rigeur for a more recent decade. But hey, they were both very fiddly to make and we have moved on. This year I’m working on a knock-em dead pre-dinner cocktail involving amaretto, cherries and gin.

Traditional? It will be. 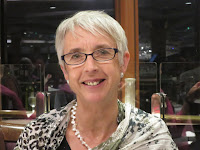 Cheers, everyone, and I hope you all make at least one new tradition this Christmas!

Wendy H. Jones said…
L9ving your view of life. I also found myself wondering if outside lights might be a good idea. Where will it end
22 December 2016 at 07:47

Jan Needle said…
Possibly totally irrelevant,but I have NEVER tasted a better Christmas pudding than Tesco's own brand. And immediately after Xmas you can usually get them for about a quid. Heaven on wheels... (And remember, a pudding's not just for Christmas. At a pound a pop, I've been eating it in November the following years. Mr Needle's handy hint for thrifty housewives!)
22 December 2016 at 09:55

AliB said…
Hi Wendy - go for the lights!
Excellent idea re Xmas pud, Jan, I actually really like the old-fashioned kind and so does Mr B whose b'day is in January - could be a good time for a 1/2 price Christmas rerun!
Have a great Christmas and New Year, everybody
Ali
22 December 2016 at 10:55

Catherine Czerkawska said…
Oddly enough, I've gone back to a few more traditional things this year. Having had a very dodgy cooker for a few years, I gave up making the Christmas cake, and one year even bought a pudding. This year - new cooker, thank God, courtesy of Jean Armour - I've made the cake (very, very boozy) and a couple of puddings. I make a really light Christmas pud though with lots of chopped apple and more breadcrumbs than flour and everyone likes it. In between times though, the best puddings and cakes were always courtesy of Aldi and/or Lidl! Or Lidldialdi as the song calls it. Happy Christmas to everyone on AE!
22 December 2016 at 11:04

AliB said…
Hi Catherine
I admit I swing back and forth from time to time. For quite a few years after we moved house we had an artificial tree (!) which at the time felt totally liberating - but when it began to drop its artificial needles I couldn't resist going back to the real thing. yours looks great, by the way. x
22 December 2016 at 12:06

Katherine Roberts said…
I too have outside lights for the first time! There are so many cheap but sophisticated battery-powered lights around now... mine have 8 different effects and a timer that automatically turns them on for 6 hours each evening.

Sandra Horn said…
I've been making a Norwegian marzipan tower - Kransekake - for the past few years. It might be Norwegian orts and scraps this year - not sure the circlets are going to come out of the tins whole...Happy Christmas!
23 December 2016 at 11:42