Writing About Where You Know. by Misha Herwin

By misha - January 11, 2017
My novels and short stories often spring from a single vivid image. It will be as clear as a photograph and will show me my protagonist and where the narrative takes place. In “Picking up the Pieces” it’s Liz striding across the Downs in Bristol towards the ornate Art Deco confection that is the Grand Hotel. The building that inspired it exists, though it has a different name and doesn’t look exactly as I describe it in the book. For me, that is not important, what matters is that the hotel is the starting point of the action; the Palm Court is where Elsa summons her friends for her startling revelation. 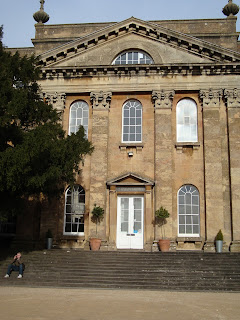 The house in “House of Shadows” is also based in reality. In my childhood, Kings Weston House was the mysterious mansion on the top of the hill, where no one was allowed to go. Not because it was cursed, or haunted, but because it belonged to the university and was private property.
Intrigued by its inaccessibility, I made up a story about an unhappy little girl in a blue dress, which over a large number of years and many, many re-writes became “House of Shadows.”
Once I had found the place and the main characters, the plot followed and setting both novels in a city I knew well made the writing easier. I didn’t have to imagine the art gallery where Jo discovers the portrait of the girl with the blue dress, or the antiques market where she buys the furniture for her new house, I could see and feel and smell them, because they I had been there.
Using familiar places saved time that would otherwise have to be spent on research. I knew how to get from the centre of the city, to the suburbs and where my characters would shop, go to church, or be taken to hospital. Mostly I kept to the facts, as I remembered them, but sometimes this approach wasn’t possible and when that happens there is always a reader to point out that you’ve got it wrong.
Kings Weston wasn’t open to the public when I was writing the book and I still prize the three star review which pointed out with a great deal of irritation that the main staircase was wood not marble and there were no statues of Greek gods and goddesses in the entrance hall. The reader went on to say that the story was spooky and kept him gripped, but that made no difference to his assessment in the light of my obvious error.
Does such an error matter? I don’t think so, because everyone’s perception of place is different. What is important to me about a town, or a building will have no impact on someone else and as a writer I would argue that ultimately what matters is the atmosphere of the book as a whole.
Of course there are many who would disagree with that view and whose meticulous research ensures that every detail is accurate.


This painting of Sion Hill, by Anuk Naumann, sums up my approach. The yellow tinge to the sky, the autumnal colours, the darkness of the building in the foreground, the solitary lamppost convey a brooding sadness that is the inspiration for my current work in progress. 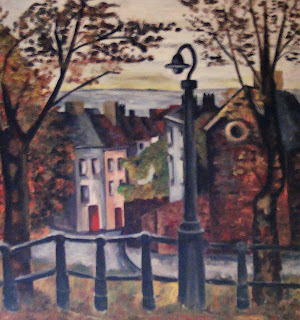 Jan Edwards said…
Writing about familiar places - and more to the point places you love - often adds that little extra spark.
11 January 2017 at 09:08

Umberto Tosi said…
True - this could be why my characters often as not find themselves in San Francisco, Los Angeles and places between them, though not as seen in postcard images of California - more my own. Sometimes, however, I can't resist the allure of a place where I have never been, but feel I know - to which I draw a breath girding myself for necessary research, which may include traveling there and viewing many online images and descriptions. All are portals to fictional worlds.
11 January 2017 at 16:28