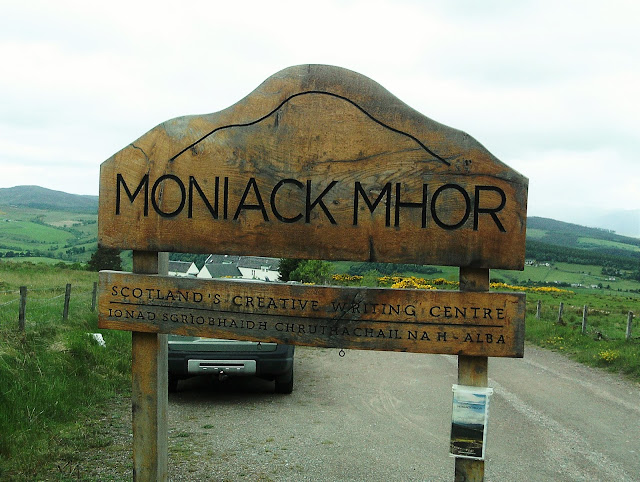 Early this month I spent almost a week at Moniack Mhor. (The 'Mhor' part means 'big' but I'm unable to find out what 'Moniack' means.) The week was a Society of Authors 'retreat' organised by my friend and tireless ball of energy, Linda Strachan, who is always organising retreats and conferences and what-not while we beg her to pause for a moment and take a deep breath. 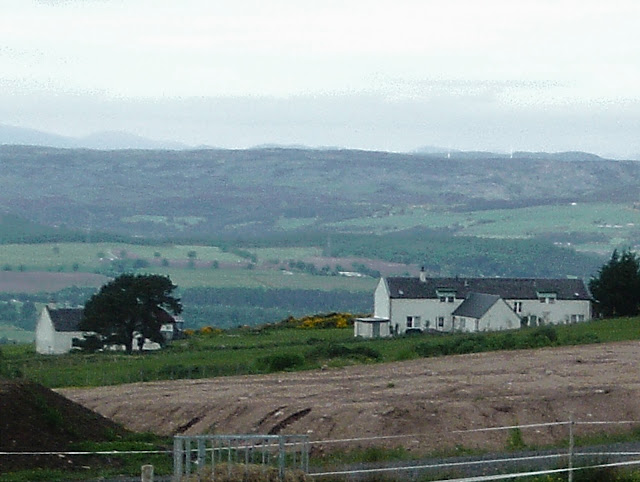 The place is near Inverness and not that easy to find if you've just driven for eight hours from the West Midlands and got lost because your sat-nav died. They tried to guide me in by phone but by that time my brain was scrambled and they had to sent out a rescue party to guide me in. It was not the first time, they said. I was happy anyway. The countryside I got lost in was some of the most beautiful I'd seen for a long time. 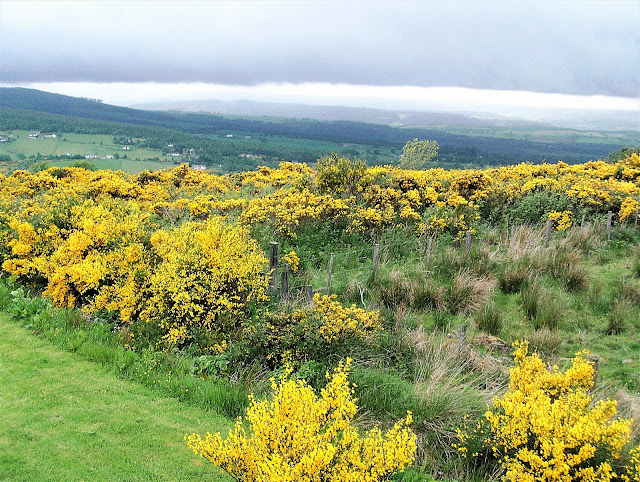 Above is the view from my little bed/writing room. The camera never captures the chromium yellow intensity of the bonny broom which blazes fiercely even at dusk or on an overcast, storm-lit day. It's never as yellow in England. 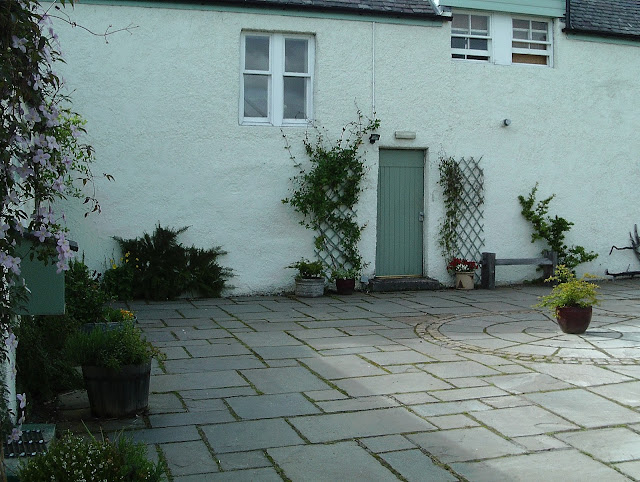 Above, the courtyard.
Below, the 'hobbit house.' The thatch is supported by arching branches and the walls are built of straw bales. In the chilly Scottish June, it was heated by log-burning stoves and it's powered by solar-panels. It's a 'tutorial space' but since there were no tutorials, my friend Penny Dolan holed up in there with her laptop and worked. 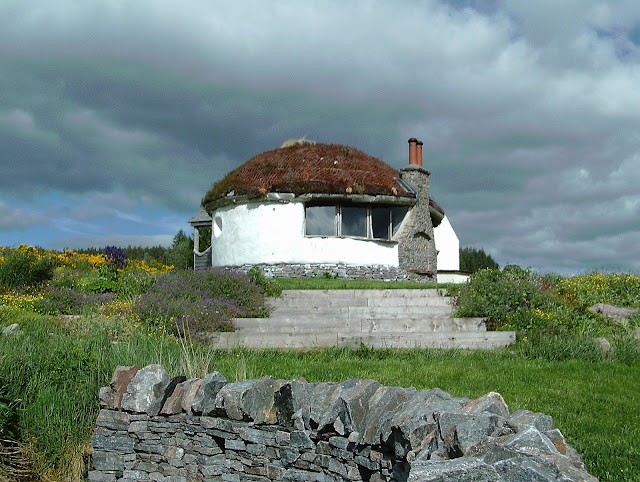 Below, one of the lanes I walked when I got tired of looking at a laptop screen. There are quite a few crofts in the area. 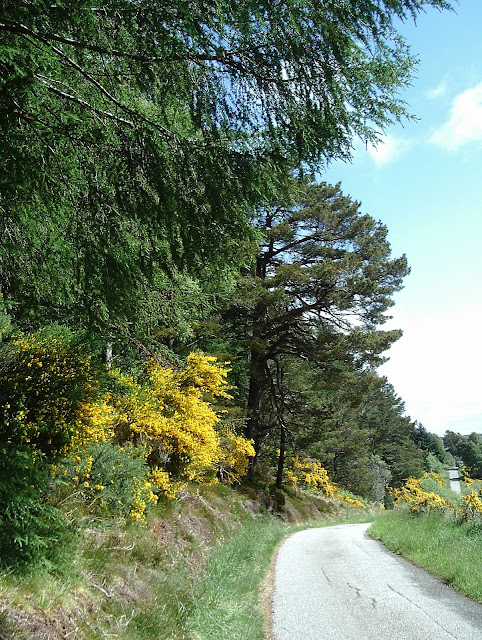 I came across this little fella (below.) Him and his mate were obviously trying to drive me off. They hopped from fence-post to fence-post and broom twig to broom twig, all the while scolding me with a curious call which started with a sweet, 'Chip, chip, chip,' and ended with a harsh, 'Craak, craak, craak.' Once back at Moniack, I used this photo, memory, Moniack's intermittant internet connection and the RSPB app to identify the birds as stone-chats. 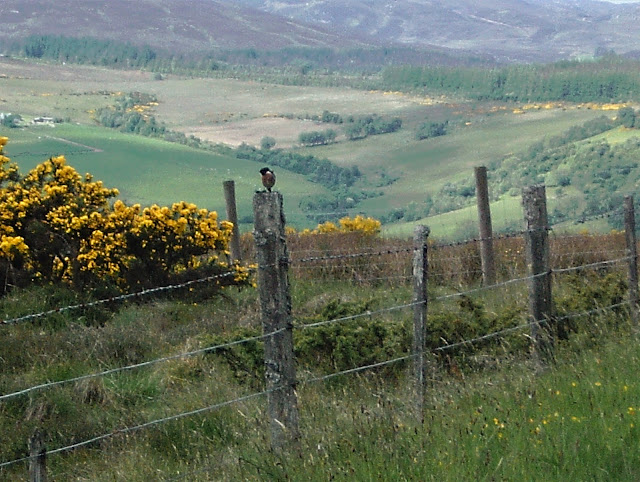 Below - most of the fence-posts wore hats. 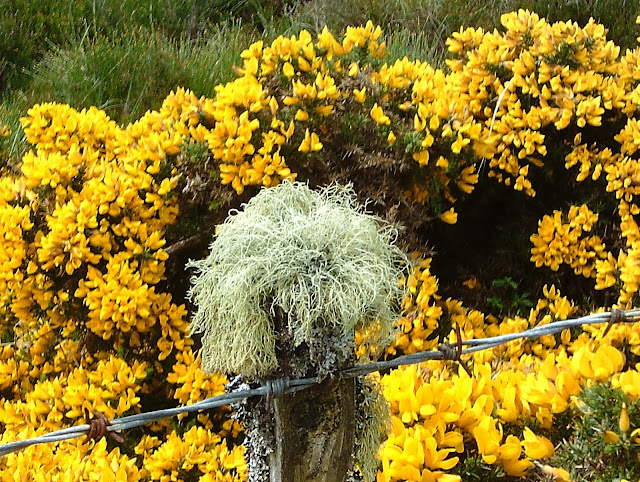 Indeed, there were some very fine crops of lichen. 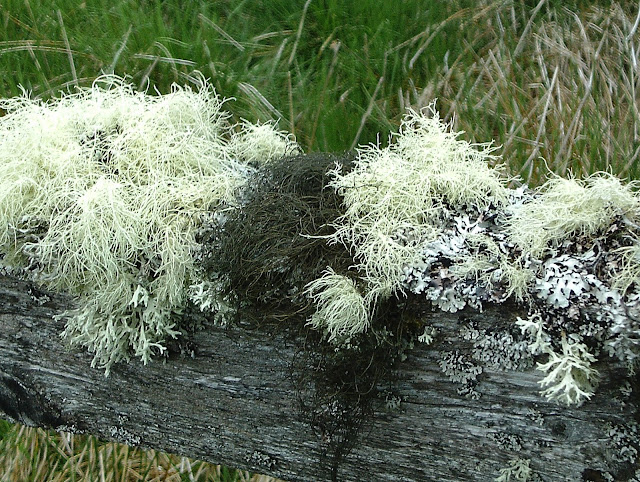 And as a lover of all blue flowers, I'm going to have to grow some of these next year:- a himalayan poppy growing in Moniack's garden. 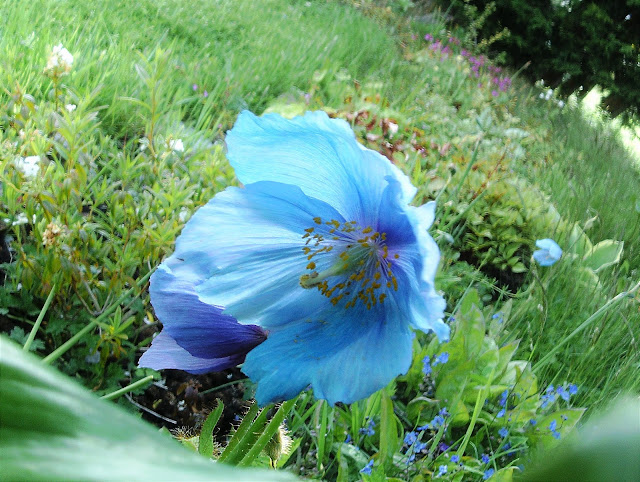 I even got some writing done. Every day we made our own breakfasts in Moniack's kitchen and chatted to however many of the 14 writers were up and seeking coffee at the same time. Then we retreated to our bedrooms to work - though, of course, you could always go down to the kitchen again for coffee and a chat, or out for a walk.
Lunch was at 1pm, prepared by the staff and dinner was at 7pm. Dinner was cooked by that day's team of writers and all the meals were delicious, especially the haggis with whisky sauce and cranachan cooked by Linda and her team on the Friday. The haggis, as was proper, was introduced by a piper.
Most of the writers seemed to disappear off to bed by about 9pm, but Linda, Penny and I, the Scattered Authors contingent, sat up late, telling stories and talking about writing as the long summer night dimmed outside and the gorse continued to blaze.

I think I could live there happily at Moniack Mhor for a year. But Saturday arrived and I had to head back down south through teeming rain.

If you're a member of the Society of Authors and you get a chance to spend a week working at Moniack Mhor, I recommend it.
Authors Electric Blog Moniack Mhor Scotland's Writing Centre Susan Price

Umberto Tosi said…
Thanks for taking us along on this idyllic journey. I feel inspired by proxy.
25 June 2017 at 22:04

Katherine Roberts said…
Sounds lovely, and so important for writerly souls to spend time in places like that. I'm fascinated to know what you wrote there?

Debbie Young said…
What gorgeous photos - and I want to live in that hobbit house! I shall be heading to the Highlands this summer. Thank you for whetting my appetite!
1 July 2017 at 21:44