A Life of Crime by Ann Evans

Over the last few months, there's been something on my mind that's not totally wholesome – crime! No, I'm not about to commit any dastardly deed, I'm talking about crime writing.

I know we're Author's Electric, but I hope you'll forgive me for talking about my latest book, a crime thriller published by Bloodhound Books.

I wrote Kill or Die (under a different title) some years ago. I sent it off to a couple of publishers, who rejected it for very different reasons. One said it was too graphic and gory, the other said it wasn't graphic enough for a crime novel. So what did I do? Put it away in a drawer and forgot all about it.

A couple of years ago I came across it again, and noticed a handwritten comment on the front page from a reader who had said they liked my style. Encouraged, I read through it again myself, and decided it wasn't too bad. So I re-worked and re-wrote and then eventually sent it out.

The first publisher I sent it to wanted to publish it, however they turned out to be bogus – and the whole situation was really traumatic. Once I'd extricated myself from their clutches, I tried again. This time I struck gold, with an English publisher called Bloodhound Books, who have been brilliant to work with.

Really getting into the crime scene, I booked to attend the Theakston Old Peculiar Crime Writing Festival at Harrogate in July. It was four days of author talks, author panels, networking and socialising – oh yes, and eating and drinking!

It was loads of fun, and I came back buzzing with inspiration. Amongst the highlights for me were meeting up with my publisher and some of the other Bloodhound authors, and meeting Lee Child of Jack Reacher fame.

What a lovely man!! He mingled with the visitors throughout the festival and was happy to chat to one and all.

There was also a really fun evening also when comic Sarah Millican hosted a 'chat show' panel with Lee Child, Val McDermid and Mark Billingham. It was so funny as she asked the sort of personal questions no other mortal would have had the nerve to ask.

Another special event was the Author Dinner where every table had its own well known crime writer, and we had Francis Pryor of Time Team fame. The evening included a Murder Mystery where we had to figure out who the murderer was – and why. 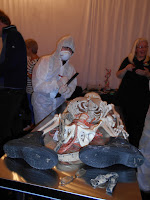 While one of the daytime events was a 'Could you be a Detective' session with 'Think Forensic' who are real forensic detectives, who talked about the things they search for when faced with a crime scene.

They also run workshops throughout the year, so if you ever need some forensic advice for a book you're working on, they are the people to call. (www.thinkforensic.co.uk)

Since being with Bloodhound, I've read lots of other author's crime novels, and I'm really getting a taste for psychological thrillers and detective books. So much so that I've joined the Crime Writers' Association, so chances are, I'll be heading off to some other crime writing workshops and festivals before too long.

What's your favourite genre for writing and reading?

Chris Longmuir said…
Nice post, Ann. I used to go to Harrogate but haven't been for a few years now. I found my conference trail was getting busier and busier and something had to go so I gave up Harrogate in preference for Crimefest at Bristol. If you haven't been to Crimefest I suggest you give it a look. It's quite big but not as big as Harrogate and I find it a tad cosier and friendlier. You can get lost at Harrogate. I usually go to Bloody Scotland, but giving it a miss this year in preference for the Society of Authors in Scotland conference, ScotsWrite, which is a week or two after it in September. I'm part of the organising committee and it's going to be great. We have a host of 'names' including Joanne Harris (Chocolat). And of course, I had an extra conference this year. The CWA conference in Edinburgh. It was really good. Oh! and I mustn't forget SAW (Scotish Association of Writers) I'm a regular attendee there every March. I think you'll find that crime writers are a really friendly bunch. Good luck with the book, I'll look out for it.
13 August 2017 at 11:29

Umberto Tosi said…
Congratulations on your success with Bloodhound, Ann! I wish you all the best with it and look forward to reading it if available stateside. You quest getting it published reads like a thriller in itself. :)
14 August 2017 at 09:07

Ann Evans said…
Thank you for your comments Chris and Umberto. Umberto, yes you'll find my book on Amazon.com and other places. If you do grab a copy I hope you enjoy it.
Chris, I will try the Bristol event, perhaps next year. The Scottish events sound good. There's such a choice, isn't there. You're so right about crime writers being a really friendly bunch, I've been so surprised at how lovely all the crime writers that I've met so far are. I've just been accepted into the CWA, so need to get my head round all the things that go on there. And at some point try and write another crime novel. :)
15 August 2017 at 21:55