The Seaside, the Seaside! Beachy reads for August from Ali Bacon 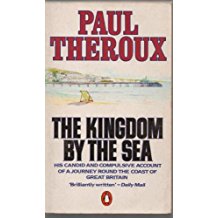 From time immemorial (well at least since the coming of the railways) a British holiday has meant the seaside, and for me even a mountain retreat in and is all the better if there’s a golden beach to run down to at the end of the day. Our coast has been celebrated in all kinds of ways in print and on TV because in our hearts it’s where we like to be. In my case even reading Paul Theroux’s A Kingdom by the Sea  which pulls no punches, didn’t rid me of my beach love, and Tenby – the only place he had a good word for– is still on my bucket list.

But we don’t need Theroux to remind us that away from the waters edge, our seaside towns are a mixed bunch and very many of them are in decline. Of all those I’ve visited in the last couple of years, I can see how those that have remained quaint have added a chic and gentrified air that sometimes feels odd. I can think of several that have simply gone to seed and one or two that teeter interestingly on the edge.  I mean those that have added a Fatface or Jack Crew to a High Street that still has plenty of cheap tat at the ‘wrong’ end.

The seaside is everywhere in fiction too, often using a much-loved coastline or childhood haunt to play with our own latent nostalgia. Unusually Lynn Michell’s the Red Beach Hut (forthcoming from Inspired Quill – I had a review copy) doesn’t specify a particular location but draws expertly on our shared experience of run-down seaside-iness (for an  elegiac story of a vulnerable boy and the adult who befriends him. As the book opens, the fragile friendship between eight year-old Neville and grown-up Abbott, on the run from someone or something, is wrecked for reasons we can only guess at: the remainder of the book paints an increasingly compelling picture of what’s at stake. The unnamed  town is redolent of all the nostalgia and sadness these places can evoke: run-down arcades on a faded sea-front, businesses struggling to survive. But the drabness is  redeemed by the ever-changing light of the sea, the sensation of damp and gritty sand and, most of all (how I longed for a bag as I read!) the smell of chips. The pace picks up when we’re thrust into the stresses of Abbott’s day job and as the narrative flicks backwards and forwards, we’re reminded that in any part of , ignorance and bigotry are never far away.  I was left with the sensation of the fragility not just of seaside communities but of the knife-edge on which society is perched.

In fiction beaches aren’t just blurred by nostalgia but fraught with danger – children can so easily come to harm on a sunny day or go missing in a crowd.  Jane Rusbridge’s Devils Music and  Moira Forsyth’s Waiting for Lindsay all play on these latent fears and Julie Myerson's gut-wrenching Something Might Happen makes brilliant use of its Southwold location. So if we want a light holiday read – a 'beach read' – maybe the beach is not the place to go. But if we just love the sea and everything in or along its shores, there’s plenty of choice of the dramas that can be played out there.

Did I mention I wrote a book with a seaside theme? Only 99p on Kindle last time I looked!

Ailsa is running as fast as she can, but the past is catching up
Ali Bacon's first novel, A Kettle of Fish, moves from the seaside villages of East Fife to the darker side of Edinburgh's artistic community.

Her second novel, In the Blink of an Eye, will be published by Linen Press in 2018.

Lynn said…
Filtered through the lens of time, I remember childhood seaside holidays as warm enough to spend the day encrusted in khaki-coloured sand as we ran in and out of waves without sun cream or arm bands. For two years, home was Southsea where the fairground was our Saturday morning stomping ground. Aged six and eight, we were free range children, our parents lying in the weak sun at the other end of the beach, nonplussed about our safety.

The setting for my third novel, The Red Beach Hut, is a compilation of those flat, faded, grey resorts that are crumbling into neglect as Brits head for the sun and sangria of Majorca and Morocco. Who wants whelks, wind and fishing from the end of a paint-peeled pier? Yet Neville, the boy who walks along the sand of just such a beach every evening while his mother services 'clients', is content because he knows no different. He's absorbed in searching for 'unhurt' shells, shouting his name in an echo-cave, watching his favourite green boat anchored in the bay and worrying that it might be lonely. Maybe Neville too belongs to a time that is fast running out like the grains of sand he tries to count but which literally elude him.

The Red Beach Hut is published on October 1st by IQ Press. Thank you, Ali, for giving it space here and for your eloquent review on Goodreads: www.goodreads.com/book/show/35329869-the-red-beach-hut