Debbie Young Writes a Book for All Seasons 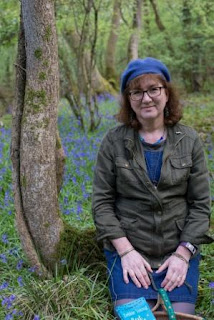 When I started planning the cosy mystery series I'm currently writing, I thought I had a bright idea: I'd make the seven books span the course of the year.

What's not to love about writing a book for all seasons, and then some? Whatever the time of year, I'd have a topical book to tout.

Given that my Sophie Sayers Village Mysteries are set in a small (fictional) English village (no surprises there), its residents are naturally very conscious of the seasonal changes, and their social calendar dictated by the time of year.

That's just how it is in the small (non-fictional) English village in which I've lived for the last 26 years. Here in my real life village, I'm so much more aware of the passage of the seasons than when I lived and worked in and around London.

Working in a city centre, I was more likely to spot the season by what was in shop windows, rather than by the appearance (or disappearance) of lambs and the like.

Bikinis in Marks and Spencers? Ah, then it must be February.


I much prefer the rural indication of the coming of spring: seeing the lambs appear down my lane.


Yes, I often share my street with sheep, or sometimes cows. Today we passed a few chickens pottering about at the roadside outside the local farm shop. Well, where else would a chicken go to do its shopping?

And if there's a traffic jam down my way, it's more likely to be caused by a farm vehicle than a stream of commuter cars. On nearby Sodbury Common, herds of cows frequently block the road.

For those who don't live in the country, reading the Sophie Sayers books will give them the chance to enjoy the seasons vicariously as they work their way through the series.

Until I try to launch my new autumn read, Trick or Murder?, full of mists and mellow murder, on a searingly hot August Bank Holiday weekend, when we can almost convince ourselves that summer still has weeks to run.

I find myself not wanting to even think about the autumn, never mind promote my autumn-themed book.

It seems unkind to remind people that autumn is just around the corner, like the supermarkets that start hyping back-to-school wear the minute the schools break up for their summer holidays.

Standing in scorching sunshine talking about Halloween and Guy Fawkes' Night - key events in Trick or Murder? - seems as tasteless as touting mince pies and Christmas cards in September. Yes, I know Tesco's will be doing that. I rest my case.

I know that commercial traders, including bookshops, will carry on regardless, marketing things at least a season before we really want to think about them.

But I've decided to launch my Christmas special for the series, Murder in the Manger, for the day after Guy Fawkes' Night, and not a minute sooner.

Time passes us by all too fast without me fast-forwarding the seasons.

In the meantime, I plan to make the most of whatever remains of the summer sunshine.


May we all have many sunny days yet to come.

Anonymous said…
Don't worry, today was freezing and autumnal - your new book looks spot on for the season. And I love your comment about bikinis in M and S, oh, it must be February. Sooooo true.

Clever idea to fit all 7 books into one year. I hadn't thought about that, but I am aware of choosing different seasons to set my books, so my characters aren't constantly battling against bitter winds and endless rain. Though, come to think of it, that could be any tine of year in the UK... sigh.
30 August 2017 at 22:15

Umberto Tosi said…
Your seasonal mysteries look like a lot of fun. I've always enjoyed changes of seasons, very evocative and stimulating to the imagination. Congratulations and good luck with them.
31 August 2017 at 07:58