What's not to love about wolves? - Karen Bush


I was brought up with wolves.


I don’t mean that literally of course – I wasn’t that lucky, and had to make do with the usual dysfunctional family. But I did spend a lot of time escaping into books from everyday life, and wolves seem to have figured quite largely in them, either as the main protagonist or as characters playing important supporting roles.


It started early on with the usual fairy tales: Red Riding Hood of course (I always considered the pro-bloodsports huntsman who hacks off the unfortunate wolf’s head to be the real villain of the story) and The Three Little Pigs. Very early on in my school life we were introduced to tales featuring Uncle Remus’ Brer Wolf, Aesop’s boy who cried wolf and learned about Romulus and Remus. A bit later I read for myself Kipling’s Jungle Book, Joan Aiken’s Wolves of Willoughby Chase, and John Masefield’s Box of Delights – the phrase “The wolves are running” still sends a delicious thrill of excitement down my spine.


Wolves didn’t vanish from my life as I got older: they still kept on popping up everywhere, in Jack London’s Call of the Wild and White Fang, our own Susan Price’s Ghost World sequence (plus others) and for the last twenty odd years in Robin Hobbs’ magnificent Seven Duchies books featuring Fitz, the Fool and Nighteyes. And you must have been taking an extended holiday on a distant planet in a galaxy far, far away if you haven’t heard of the direwolves in GRR Martin’s Song of Ice and Fire (aka Game of Thrones) books … 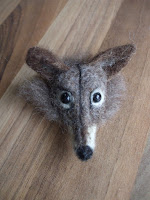 These are just a few – there are so many more wolves I could mention, such as Maugrim in The Lion, The Witch and The Wardrobe, Michelle Paver’s Wolf Brother, Emma Barnes’ Wolfie, Jean George’s Julie of the Wolves, Rosemary Sutcliff’s Warrior Scarlet, Tolkien’s wargs in The Hobbit … well the list goes on and on. I expect you have your own favourites.


So when I started making needlefelt brooches as a sideline to writing and teaching, it was probably inevitable that as well as making hounds and hares I also made wolves. Well, why not? As I said, they’ve been around all my life in my reading matter, so something was eventually bound to rub off … 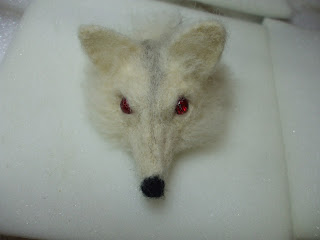 Winter is coming – have you got your wolf head brooch yet?


Available in a range of colours with eyes made of semi-precious gemstones including onyx (black), carnelian (red), mossy agate (green) and red/brown or yellow/brown tiger eye.
For more details visit my FB page at:
Keepsakes Felties

Umberto Tosi said…
I know what I'm getting at least one of my daughters for Christmas. Your wolf brooches are so cool. I rooted for the wolves in fairy tales and Disney movies as a boy. I always thought wolves got a bum rap, and I found out it was true when I grew up and read about Canis lupus ecology. I devoured White Fang in the fourth grade, and my classmates looked at me strangely when I told everyone I wanted a wolf-dog. Other boys took to howling when they saw me. Howls of approval on this one, Karen. :) Thanks.
10 August 2017 at 10:51