By Fran B - November 02, 2017
Tomorrow I am heading up to Stonehaven, a wee town just south of Aberdeen. Wendy Jones - a keen AE member and blogger (as well as successful crime writer) does a monthly radio show on the local station, called BookBuzz. She has invited me to be this month's guest author. So I am feeling quite energised and ready to rock 'em in the aisles.

I actually love radio as a medium and have been a listener since the 'tranny' days of my misspent youth. I even worked briefly for a local radio station and chaired an advisory panel for another. That was a great wheeze since it involved going to twice yearly to the IBA HQ in London for meetings. Their offices were directly opposite Harrods. My children were quite the envy of their friends as I shopped there for those little 'bring-you-back-a' presents, with which we parents assuage our guilt when we dare to have a life of our own and leave them - albeit perfectly well cared for - even for a short time.

I also love radio because it does not require full make-up. support underwear, tottering heels, or any other fine mode of torture as inflicted by TV. I can just be myself. Phew!

When Wendy got in touch a few days ago to check I was still up for it, I happily replied a big YES. Then - here comes the memory lane bit - she asked me to choose six songs to be used on the show.
I immediately thought of one of my all-time favourite radio shows, Desert Island Discs, and decided to try and think of a song/piece of music from each of the last six decades (yes, I am that old - my secret is out). 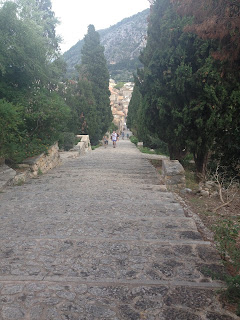 The Sixties: uni residence late night sessions round the record player and rushing out to get the latest Beatles single as soon as it was released. In the end, I went for A Groovy Kind of Love which took me back to a Residence Ball when I fell in love with my first husband, the father of my three daughters.
Despite what happened later in that relationship, that remains a magical night in my memory.

The Seventies: the Love Song from Romeo and Juliette , a sumptuous piece of music which I discovered when watching my four-year-old daughter prance about the stage in a tutu, and alternating between swelling pride and suffocating giggles. Is there anything funnier or more endearing then watching a troupe of tinies, dressed up like dolls, staggering through their fiercely rehearsed routine, small faces frowning and tongues protruding in concentration?

The Eighties: Caravan by fellow Scot, Barbara Dickson. The final words 'I may be on my own but I'll be free' seemed to be sung directly at me as I struggled to believe I could break out of an unhappy marriage and carve out a happier life for my daughters and me. The good news is: I did!

The Nineties: Under the influence of a new partner (now my second husband), I discovered Elton John. (I know: where had I been for the past 20 years?) I fell totally in love with his Candle in the Wind and, when he adapted it to mourn the death of Princess Diana in 1997, my cup of sentimentality ran over. Very satisfying.

The Noughties: Sticking with Eltie, I had Your Song as an earworm for at least two years around 2004/5. I gather it had been a hit, decades before, in the US but only made it big here then. We moved out of the city (Edinburgh) to our present village in 2002 and I suddenly had an hour or so commute to and from work. I remember belting it out, with full facial expressions and body language,  as I crawled through the early morning scrum and tea-time traffic. It always raised my spirits and provided hours of fun for my fellow traffic-jammers, watching me.

The Teenies (is that what this decade is called? I don't think I've heard a name for it): The overnight success of Susan Boyle (who can forget Simon Cowell's face when she started to sing 'I have a Dream' in Britain's Got Talent?) was of particular interest to me as she comes from a small town in West Lothian, near my village. The contrast of her insecure personality and brash talking voice with her perfect musical interpretation and stunning singing voice is one of the wonders of this century. I continue to worry about her personal survival in 21st century media and showbiz. Sometimes when I see her on TV, I find myself praying under my breath for her. She always seems so vulnerable and brave. So my final song is SuBo singing 'How Great You Art'.

What would your memory lane songs be and why? It could be this year's Christmas game.

Fran B said…
Spot the deliberate error! yes, I DO know that Subo did not sing Martin Luther King's famous speech but, in fact, 'I DREAMED a dream' from Les Mis. I would call it a senior moment except I have been perpetrating such goofs since I was knee high to a grasshopper. Sad.
2 November 2017 at 09:49

What a delightful post; I love the idea of marking decades with songs and naturally am now distracted from replying to emails by pondering my own list. All the best for your radio appearance tomorrow. It will make great listening!
2 November 2017 at 17:51

Cecilia Peartree said…
I'm really tempted to stop what I'm doing and make a list of my own. I think it could take a while as I don't remember much about certain decades (mostly the eighties, when I had small children) and there's too much choice for some of the others.
4 November 2017 at 12:22