Two nations divided by a common davenport by Griselda Heppel

By Griselda Heppel - November 01, 2017
Twenty years ago the tragic death of a baby in the USA by what was thought to be ‘shaken baby syndrome’ made headlines all over the world.  On trial for the little boy’s murder, the British nanny unwittingly sealed her fate by describing how she’d ‘popped the baby on the bed to change his nappy.’  What Louise Woodward didn’t realise was that an expression used in the UK to describe an action taken with lightness and dexterity doesn’t translate at all that way in the USA; there, ‘pop’ can only mean something explosive.  No amount of explanation could erase the image in the jury’s mind that she had hurled the 8 month-old on to the bed with all the force of a rocket launcher.

Misunderstandings between our ‘two nations divided by a common language’* aren’t usually so dangerous.  Nor should any English people loftily assume our words are the ‘original’ ones; in many cases it’s the other way round.  ‘Garbage’, ‘trash’ and ‘sidewalk’ date back at least to the seventeenth century, whereas ‘rubbish’ and ‘pavement’ are much more recent.  Usually even if the word is unfamiliar, the context reveals the meaning; though this assumption falls down hilariously when it comes to clothing, as any American who has sent their child to English boarding school can testify.  Presented with a uniform list, US mums are baffled by the requirement of 8 pairs of trousers (pants), 4 sleeveless padded jackets (vests) and no underwear whatsoever except for 2 pairs of toddler pull-up nappies (trainers). 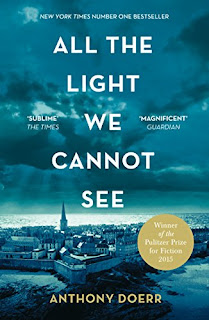 Coming from the UK side of the pond, I thought I could spot all Americanisms and easily work them out. Not so. Recently, reading the wonderful, Pulitzer Prize-winning All the Light We Cannot See by Anthony Doerr, I was brought up short by what looked like a genuine mistake. (If you haven’t read this beautifully written story of two young people – a blind French girl and a German boy – growing up on opposite sides of World War Two, then do.)  Entering her great-uncle’s room, Marie-Laure sits down on ‘the davenport’. Since a davenport is a very English piece of furniture, being a small, compact writing desk with shelves, designed by Captain Davenport in the 18th century, it seemed an odd thing to find in a house in St Malo, and even odder for Marie-Laure to sit on it.
When, a few lines later, Great-Uncle Etienne sits down beside her on the davenport, I realised some kind of sofa must be meant, and thought Doerr had got the wrong word.

Not so. Davenport & Co turns out to be a company in Massachusetts that made a series of sofas in the late 19th century, whose popularity led to davenport becoming – in the USA – a genericised trademark, i.e. a word for sofas in general. So Doerr is right after all.

But.. is he?  To use a particular American company term for a piece of furniture found all over the world feels eccentric in a novel set in Europe in the 1940s. For readers outside the USA, it’s like calling all pianos Steinways, with children sent for Steinway lessons, and being put in for their Grade 1 Steinway exam.

More than eccentric: later in the book, Sergeant Major Von Rumpel muses on the 'fifteenth century davenport' he’s shipping from Paris to Germany. This presents the reader with the rather marvellous but wholly impossible image of a company making sofas in Massachusetts in the 1400s.

I know, I know, I’m making a Kilimanjaro out of a, er, molehill here. But from a writer whose power to evoke all kinds of environments and emotions is nothing short of astonishing – from the dreary, choking coke factories of 1930s Germany to the brutal elite school for Nazi youth, to the dry, dusty Museum of Natural History in Paris with its collections of delicate molluscs and insects to the briny, wind-scoured towers of Saint-Malo –  this one false, historically tone-deaf note... jars.

Fran B said…
I've always loved the two-sided expression: I'm mad about my flat. Depending on which side of 'the pond' you live, you are either angry about your car getting a puncture or delighted with your new apartment/tenement house.
1 November 2017 at 22:18

Anonymous said…
Thank you, Umberto, I'm delighted you enjoyed it! I find the different ways the USA and the U.K. use language fascinating. Over here we adopt many Americanisms but I don't think Davenport will catch on... though you never know.

Fran, that's brilliant! I'd never heard that one before. There are probably quite a few other phrases that mean something totally different on each side of the Atlantic.
2 November 2017 at 08:11