The Tyranny of NaNoWriMo - or is it? (Cecilia Peartree)

By Cecilia Peartree - November 05, 2017
I don't think I would ever have written nearly as many novels if it hadn't been for NaNoWriMo. It's only this past year that I've started to wonder if I've become a victim of it instead of a beneficiary. 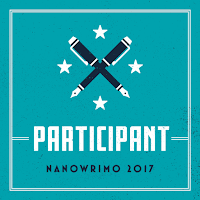 It was so exciting, that first year when I didn't know if I would reach the 50,000 word target by the end of November. I had never written as much as 50,000 words in a month before, despite having managed to complete, over quite a number of years, a couple of mysteries, an epic novel of the English Civil War and an odd book called 'The Tree Museum' that I was very fond of but which fell awkwardly between genres. Not to mention several children's plays and a handful of short stories. I probably wouldn't even have attempted NaNoWriMo if it hadn't been for Radio Scotland, who happened to run their own writing event in February 2006. Their target was only 1,000 words a day, and because it was February and not even a leap year, the total was a little lower than it might have been for any other month, and seemed more achievable. To my surprise, I found it quite easy to write 28,000 words, partly because I had just had a huge fight with someone from the local council, and used that as the basis of a murder story, with him as the victim and members of my own family as some of the other characters. Sheer fury carried me along!

NaNoWriMo itself was a bit more of an undertaking, and I still don't know if I would have attempted it at all if it hadn't been for two bereavements within nine months in my immediate family, which gave me a new sense of urgency about doing things I had always wanted to do. That first year I wrote 50,000 words of a bleak dystopian novel which fitted my frame of mind, and the following November I wrote something that wasn't quite a mystery and wasn't quite a thriller, which later turned into the start of a long-running mystery series. There was a lot of editing involved in those days before anything at all publishable emerged from the chaos.

So far, so good. As long as I could keep just writing one first draft a year in November, it was still great fun. But this November as I start again, it's the first step towards creating the 5th novel I've worked on in the last 12 months, beginning with the edits for last year's NaNoWriMo novel. In the mean-time I've written novels during the two Camp NaNoWriMos in spring and summer, and an extra one in August because it suddenly seemed like a long time (it wasn't) since I'd written anything new in my mystery series.

In a way it's the tyranny of self-publishing I'm talking about here - the pressure to release the next novel in a series, or to find something new to write that will appeal to a different or wider audience - to keep running faster and faster to stay in the same place. I suppose I am just using the NaNoWriMo events to try and manage that pressure, so in that sense NaNoWriMo is more of a benevolent despot.

But at some deeper level the compulsion, perhaps even strong enough to be classified as an addiction, is actually something that comes from within me. It's the urge to get the stories out there while I still can, or before the supply dries up, one way or another.

JO said…
I get the urge to write - and admire anyone who joins in the NaNoWriMo thing, but nothing would induce me to join in. I don't need goals I might not reach - and not enjoy the trying because I'd joined in the hoo-ha and seen everyone else's words piling up. That feels like setting myself up to fail.

Debbie Bennett said…
I'm the same, Jo. Nothing like somebody telling what to do to make me dig my heels in! But it does work for others.

Cecilia Peartree said…
I think the main advantage of NaNoWriMo as far as I am concerned is the impetus to announce to people that I'm writing, and the sense that it's something I need to set aside time for in a busy life. I can understand that many people can do these things without any outside input though, and I can certainly identify with not wanting in general to do what other people tell me to do (I am an expert at that, as my mother-in-law and daughter-in-law would both probably testify).
5 November 2017 at 12:02

Umberto Tosi said…
For years I wrote as part of my job or under contract and discovered deadline delirium as a friend. Deadlines - external, or self-imposed - tend to shoo away paralyzing self-doubt that stops a writing session cold. I find it much more difficult to keep to self-imposed deadlines/goal than I do for an editor (real or imagined) breathing down my neck. NaNoWriMo sounds tempting. I'm glad to hear it's worked so well for you. Thanks!.
5 November 2017 at 19:34