A Question of Terminology by Cecilia Peartree

By Cecilia Peartree - February 05, 2018
I suppose as a writer I think about terminology quite a lot, and in fact in my day job as a database manager and general data wrangler I do this even more, although mostly when trying to prevent other database users from creating lots of different terms for the same thing and thereby making it impossible to search the database with any hope of success.

In the past few days, events have conspired to make me look more closely at the words 'suffragist' and 'suffragette', and the difference between them. I don't think I had given much thought to this before, having accepted the usual story that suffragettes were the militant ones whose desire for the vote caused them to set fire to things and annoy people, while suffragists wanted the vote but weren't prepared to die - or kill - for it. There was also the fact that men could be suffragists, but not suffragettes. When I consulted some online dictionaries, I found that the word 'suffragist' dated from the 1820s, when it would have almost always referred to male campaigners for the vote.

The word 'suffragette' was much more catchy than 'woman suffragist' and has stood the test of time well, even although it does sound a bit like a name that might have been given to a troupe of music hall dancers or possibly the people who were responsible for showing campaigners the way to their places in the 'votes for woman' procession. Apparently some people now consider this term derogatory; however it came into popular use in Britain very quickly from its first appearance in 1906. To my surprise, a newspaper article from 1908, which I looked at recently while trying to get up to speed about a relative of mine before being interviewed about her*, used the words 'suffragist' and 'suffragette' more or less interchangeably. 'CHAINED TO GRILLE New Method of Women Suffragists' was the main headline, but further into the article the reporter refers to 'Four athletic suffragettes' who climbed on to an equestrian statue in Old Palace Yard while the others in their group were creating a disturbance in the House of Commons.

This is slightly different from many people's perception now. History has been simplified, as it often is, to turn suffragists and suffragettes into competing or even opposing groups who couldn't stand each other, whereas actually 'suffragist' was an umbrella term for everyone who campaigned for the vote to be extended, so people who were 'suffragettes' were included in that. There was certainly some rivalry and disagreement between the organisations involved, and the WSPU tended to be more likely to encourage women to use violence and to take personal risks than the others. The Women's Freedom League, to which my relative belonged, organised demonstrations but they were against violence. I think they still qualified as 'suffragettes' as far as the newspapers were concerned, though! 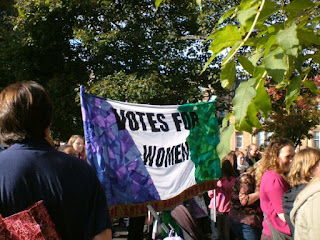 Above - taking part in a march through Edinburgh in 2009 to commemorate a similar march by the Scottish suffragettes in 1909, which was led by Flora Drummond on horseback.

*In case anyone has missed it, February 6th 2018 is the centenary of the Act of Parliament that gave votes to (some) women in the UK. There will be radio and television programmes about the suffragettes on the day, and because my great-aunt was one of not that many Scottish working-class suffragettes I have been tracked down for an interview as part of a BBC Scotland feature.

Fran B said…
So glad I took the time to read today's blog (I can't be the only AE writer who quite often doesn't because too busy writing or researching or just doing life). I've just started writing a novel that will have this era at its core, so your post is spot on for me. Thank you for it and for reminding me about all the upcoming programmes.
5 February 2018 at 11:46

Umberto Tosi said…
Suffer the suffragists (and suffragettes and every able bodied voter - to come unto the polls. Terms are important, as you so rightly point out. So are such reminders of how hard your great aunt - and all of our predecessors - had to fight to gain the voting rights that too many have taken too lightly in this age of cyber-disinformation-exploited apathy and cynicism aimed a disempowering, then disemboweling democracy. Enjoyed your post! Thank you.
5 February 2018 at 19:32