Call of the Duvet by Jan Edwards

By janedwards - February 19, 2018
It is that time of year when some of us would much prefer to hibernate. Once new year celebrations are over (in the UK at least) there are two months of cold and damp to look forward to – and I am a summer girl.

It was touch and go whether I would make it at all, having gone down with a bad cold that week, but I decided it would be too bad of me to cry off at that late stage. I hate letting people down. So, sniffing and shivering aside, I decided the game was still afoot.

The event was in Derby,  just an hour’s drive from here , so my old friend Debbie Bennett, also an author on the same project,  was driving to Derby with us and then staying with us overnight.
We set off in good time and parked near to the Quad, because that was where we ‘knew’ the event was taking place there. We  had a leisurely Italian meal in the restaurant opposite the venue and at around 7pm we strolled over to the Quad in what we thought was good time.

So far so good.
In the Quad cafe we bumped into the Robert Dick and Steve Hatcher – and this is where things began to go distinctly kablooey. The lads expressed surprise to see us there. ‘We must be off,’ they said. ‘We have to pick up Sam and David. But we shall see you there at the gig venue in little while.’
‘See us there?’ says we. ‘Isn’t this it here at the Quad?’
‘No,’ says they. ‘It is at the Voicebox!’
To say that panic ensued would be mild. It had started out so well and suddenly it was the night out from hell. I don’t know how we had all had the very certain knowledge that the Quad was a venue, but  we all had it wrong as it turned out. Our own collective faults, and an object lesson in the first rules of being a writer:  always, but always, read those guidelines!
Whilst Debbie Googled the Voicebox and my other half, Peter, fetched a map book of Derby from the car and having consulted the various oracles we realised the venue was not that far off. So we started walking and arrived there at a little after 7.10, which, when the event began at 7.30, we thought was pretty damned good.
Second shock wave of evening hit us. Having hoofed it across Derby town centre, we were nonplussed at finding the place deserted. Every door locked, not a light to be seen, not a soul in sight.  Had we got the wrong place yet again? After a few minutes waiting and wandering up and down a dark  and freezing side street, checking and rechecking that we did indeed have the right address this time, Debbie made a call.
Yes, we had arrived at the right place, and, we were assured, the caretaker would be along at 7.20 sharp to unlock.  So we waited, and we waited. Other people started to drift up, and we stood shivering together like a bunch of depressed penguins, getting colder by the minute. At least, I told myself, it wasn’t raining, or snowing.
The Keeper of the Keys did eventually arrive – at dead on 7.30; not a moment sooner nor later; as they do. By that time, however, I was chilled to the bone and feeling decidedly grotty. I had not anticipated hanging around on frosty street corner and my head-cold was rapidly descending over my senses like a pall, and with it all chance of retaining any capability to construct a coherent sentence.
We’ve all been there. Catarrh-brain had struck!
Once inside we found our hosts to be were lovely people, and the signing went well. (A hot drink would have been nice, but apparently there were no facilities for tea or coffee – one of those things I guess.) We signed many books, which is always good, and I had at least begun to thaw out by the time we were up for the panel.

The interviewer,  Robert Dick, was charming as he chatted to all of those on the make-shift podium;  Reel Times Films guru Keith Barnfather,  authors Debbie Bennett, Sam Stone, David Howe and myself , plus cover artist Andrew Thompson. 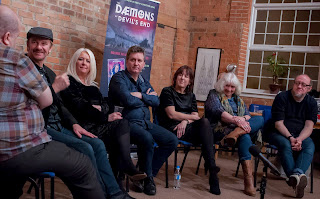 I think I did okay – by which I mean to say that I didn’t say anything too stupid (so far as I remember). Now in the normal run of things I would have stayed for the second half  of the event, in which actor Steven Thorne was interviewed. But the only reason I was not actively 'death warmed over' was the fact that I was too darned cold; a classic contradiction. With an hour’s drive ahead of us?  I just wanted to go home, have a couple of glasses of wine, and finally be warm!
At least it was a signing I shan’t forget in a hurry, and on the upside it was a chance to catch up with friends and even make a few ones. Books were sold and titles promoted. Huge thanks to all who got the event going.
Note to self: always check the venue and always pack an extra jumper!
And if you hear that call to hibernate under the duvet on a frosty winter night? Give it some serious thought!
***

Jan Needle said…
Good beginning to a ghostly tale. You, all alone after everyone else has gone on a recce. On the dot, the door opens. And who - or what - opens it...

I went down to London last week for a signing (not mine; author solidarity) dressed only in a jacket and jeans. Well, it's dahn sarf, innit? Damn near froze to death.
19 February 2018 at 11:01

Dennis Hamley said…
I feel your pain, Jan. More times tham I care to think of, I've gone to the wrong place, arrived at schools on the wrong day, turned up a day early or a day late for publishers' parties (one especially grand and prestigious, which I still curse myself about). An inability/unwillingness to read instructions has dogged me throughout my life.
19 February 2018 at 13:50

Enid Richemont said…
Having read this post, I was emboldened to make an embarrassing confession - I went through the first part of today convinced it was Thursday (it is actually Wednesday). Now currently on a search for those lost marbles - they have to be somewhere...
21 February 2018 at 15:01