In Praise of Cozy Literary Festivals by Dipika Mukherjee

By Dipika Mukherjee - February 26, 2018
Like most writers, I have done my fair share of speaking at literary festivals. In 2017, for example, I went from the humongous Singapore Literary Festival (which had concurrent panels for three days and a dedicated Artist Liason Officer (ALO) to escort me to the correct venue), to the much smaller Neustadt Festival in Oklahoma with nine speakers.

All literary festivals have something to offer the writer and the reader, but I personally enjoy the cozier festivals more. There is something about being thrown together in close proximity for a few days, usually in the same cozy hotel, that encourages a special kind of literary friendship to blossom.

Gladstone's Hearth Festival in 2018, held from February 3-4 in Wales, was just such a festival.

My fellow speakers were Annabel Abbs, Sheena Wilkinson and Jenny Lewis. Polly Atkin was writer-in-residence in February. I learnt a lot from my fellow writers in the week that I was at Gladstone's: Annabel gave a brilliant talk on old cookbooks and the voiceless and powerless women behind the bestsellers of centuries past;
Sheena spoke on making history come alive for young readers in Ireland and beyond; Jenny read eloquently from her recreation of the epic Gilgamesh; Polly's talk, on the fragmented verse of writers dealing with chronic pain, touched a chord in many people in the audience. 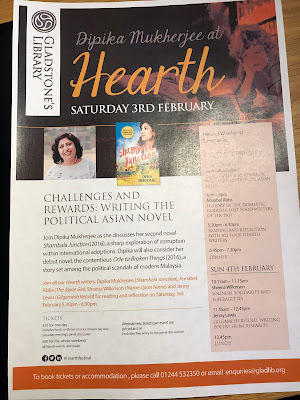 The Q&A sessions were lively and interactive. I spoke on writing the political Asian novel and I found the audience knowledgeable about issues Malaysian as well as Indian; this was a globally-engaged, erudite, group. Retired professors and researchers, like Rob Spence and Elaine Ellery, had driven from the nearby universities, and the tenor of the questions ranged from academic to the curious.

Much of the discussion spilled over to lunch and dinner, and for the members of the audience that stayed overnight, even to breakfast the next day. 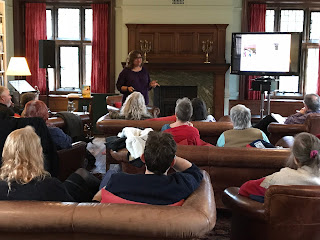 Gladstone's library prides itself on being a meeting place dedicated to dialogue and debate, and this is a gorgeous venue for anyone interested in engaging with the issues of our present day. 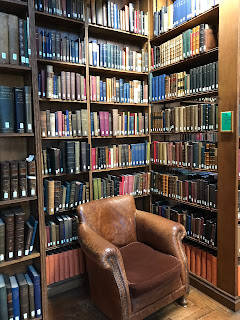 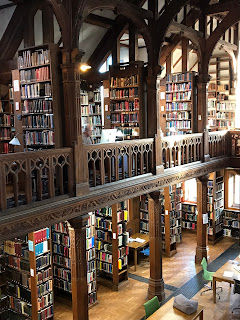 As Britain's only Prime Ministerial Library, it contains a large number of books from the collection of William Gladstone, with the statesman's marginalia inscribed on yellowing pages. The wooden arches and galleries of the interior soar to the skies like a place of worship; this is truly a cathedral of learning.

This is a lovely place to be a writer-in-residence. Rooms are cozy and television-free, although they do have a charming retro radio by the bed. The on-site restaurant, Food For Thought, spoiled us all with hearty Welsh and international food (they serve sumptuous teatime treats in addition to three meals). Then there was wine by the fire in the evenings, and conversations trailing into the night. On other days, I'd be at the library until it closed at 10pm at night.

My days passed in writerly conversations and reading for research, walking through the estate's deep woods before a hearty meal. I fed my mind and soul.

Click here to listen to my talk on Soundcloud: Writing the Political Asian Novel.

Dipika Mukherjee has her home in Chicago but trawls the world for fabulous stories and smelly food (the durian is a favourite). You can read about her work at www.dipikamukherjee.com

Umberto Tosi said…
Your post raises my spirits, brimming with the warm energy of creative endeavor, such festivals abuzz with fine people and prose shows us how alive our writing world remains, with its tributaries flowing quietly through forests and glens despite the pronouncements of it demise. p.s. - also enjoying your talk on Soundcloud. Thanks!
26 February 2018 at 23:52