By Andrew Crofts - February 27, 2018
Poor, tiny, battered is in the global headlines once more – this time courtesy of a scandal involving aid workers and prostitutes.

I have to confess that there have been many times where I have accepted an invitation to a destination simply because I have read and loved a book about the place, (“The World of Suzie Wong” for Hong Kong, “Breakfast at Tiffany’s” for New York, “Death in Venice” for Venice, “Myra Breckinridge” for Hollywood, “Don’t Stop the Carnival” for the Caribbean islands generally, “The Great Railway Bazaar” for the art of travel itself, and so forth).

I must have read Graham Greene’s “The Comedians” pretty soon after it was published in 1966, when I would still have been in my teens, (I had probably seen the film too, which was produced as a vehicle for Elizabeth Taylor and Richard Burton the following year).

Greene had already caught my attention with both his stories and his own life, taking my imagination to some of the darkest and most frightening places on Earth. “The Comedians” painted a picture of under the tyrannical “Papa Doc”, who used the fearful power of Voodoo and his private army, the Tonton Macoute, to control the people. It seemed like the most exotic and dangerous place a man could ever hope to travel to and Greene’s story was filled with the sort of damaged characters who roam such places in search of quick fortunes and adventure, always living on the outside.

In the early eighties I was hawking my services as a travel writer to anyone in a position to dole out a free flight or a bit of board and lodging. I had been spending time on a number of Caribbean islands like , and , where it was not hard to find tourist authorities and hotel owners who were willing to entertain a freelance writer for a while in exchange for articles about their islands and their facilities. , however, was going to be a harder nut to crack and I lacked the nerve to simply turn up at Port au Prince and take my chances. 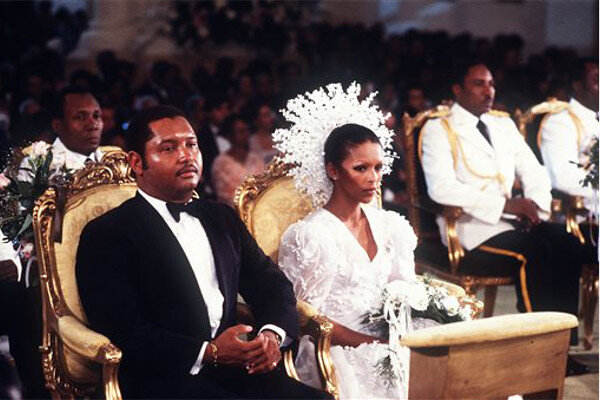 By that time Papa Doc’s son, “Baby Doc”, who was only a couple of years older than me, was President and the darkness of tyranny that Greene had depicted so chillingly had, if anything, deepened. The only news stories that came out of the island were bad ones, making it all the more intriguing. I had written to the island’s consulate, making preliminary enquiries but not holding out much hope of a reply, when I received a phone call from a British businessman who had made his home in and was extremely keen to promote the place.

“You need to come to ,” he told me, “everyone has opinions about it but no one really knows it. You can stay with us and I’ll show you the real island.”

It was an invitation I was definitely not going to turn down. It was a chance to experience first hand how an ex-pat lived in such a place, and I would have someone to guide me in Greene’s footsteps. Perfect.

Baby Doc would be ensconced in the white folly of a presidential palace for only a few more years before he was overthrown and fled into exile on the French Riviera.

The palace now lies in ruins following the earthquake, as uninhabitable as the rest of the city around it, but then it still gleamed like a heavily guarded wedding cake amidst the squalor as I stood outside the gates staring in, trying to imagine the domestic life of the tyrant and his family, wondering how they managed to justify their actions to themselves and to one another. It was a curiosity which would later tempt me to accept invitations to the palaces of other tyrants, wanting to see what made them different, wanting to understand how they had found themselves in such extreme situations, able to exert their terrible will over whole populations.

The exotic Grand Hotel Oloffson, where Greene had set most of his story, (calling it the Hotel Trianon), and which  had been used in the film, still stood on the outskirts of Port-au-Prince and one of Greene’s original characters, Aubelin Jolicoeur, (the gossip columnist, Petit Pierre, in the book), still propped up the bar. 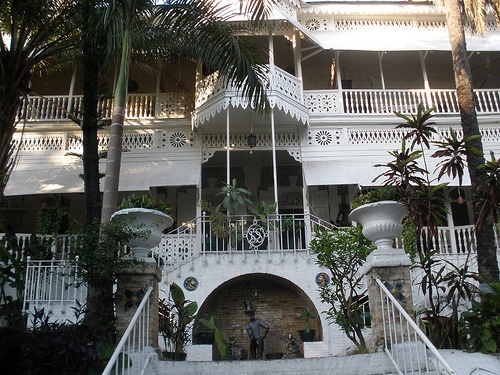 “He has made himself one of the country’s leading characters,” I wrote at the time, “affecting cane, monocle, cravat and a theatrically camp manner which makes many unaware of just how much influence he has at the presidential palace and in ministerial offices.”

In one of those ministerial offices I met the island’s then director of tourism, “a Gucci-clad minister by the name of Theo Duval”.

“Why do we travel?” he mused. “To feel in a pleasant way, to make a loop in the straight line of our existence, escaping into timelessness, a dreamlike state in which we are not reminded of our servitude.”

It was the first truly poor place I had ever visited and I was shocked to see how close to the brink of chaos people can survive, and frightened to see how fragile a veneer civilisation actually is.

“The Comedians” ends with one of the departing characters throwing a handful of coins from a car window, causing a dangerous riot amongst the scrabbling horde of street children – an image which we would later see magnified and repeated nightly on the news after the island was repeatedly hit by natural disasters.

“When people come to ,” Aubelin Jolicoeur told me in the hotel bar as the tropical night-rains crashed down on the roof of the veranda outside, “they always try to make the story funny. They never take it seriously. All through the centuries we have been ostracised by the world because we were the first black republic. Always we are misunderstood and misinterpreted. There is a bad spell on .”

Bill Kirton said…
Fascinating and, of course, insightful, Andrew. Nowhere do the connotations of a word get blurred as often as when the word is of a location as (theoretically) exotic as Hawaii.
27 February 2018 at 13:08

Enid Richemont said…
"The thin veneer of civilisation" - the scariest words in a fascinating post.
28 February 2018 at 12:41