Bringing Back Memories by Cecilia Peartree

By Cecilia Peartree - March 05, 2018
Once again I have benefitted, quite unfairly, from my lack of organisational prowess, by having left the creation of my March post until the last minute and, because of this, being able to write about the sudden re-arrival of winter just when we thought we could all come out of hibernation. I've spent a few days trapped in the house, but that isn't exactly an enormous hardship, apart from the fact that the IT department at my workplace, in an uncharacteristic display of technical skill, have managed to make it possible for me to log into my work desktop remotely and even to update the main database from the comfort of my writing desk in the conservatory. So I haven't been able to spend all my time on writing-related tasks as I might have done otherwise (though I've worked on my Spanish course a little - more on that later). 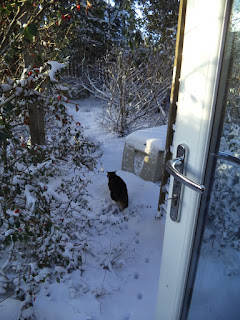 The cat makes his way cautiously down the garden, treading in his own paw-prints from last time to avoid getting his feet too wet.

But who am I kidding? I've used most of the time I had to spare from updating the database in taking photos of the snow, looking at other people's photos of the snow on social media, opening the door for the cat, closing it again when he decided it was too cold to go out after all, stalking the local bus company on Twitter to see if they had started to run buses again, consulting our local Facebook group to see if anyone had located a shop still selling milk (they hadn't, at the time of writing). If I hadn't found some work to do for my day job, I would probably have spent all day doing all those things over and over again in preference to anything useful. 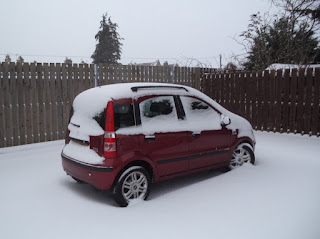 I trudged round to the little car park behind our house just so that I could take a picture of the car in the snow to compare with the one I took in 2010, which for some reason my work colleagues found hilariously funny. 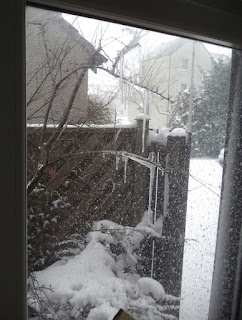 We even have icicles in the exposed part of the garden, where we used to have a gate until it blew down for the umpteenth time and we never bothered to put it back up again.

I don't enjoy snow at all, and I've never been at all tempted to try out winter sports. Looking back at some of the snow experiences of my lifetime, this isn't all that surprising. One winter when I was a child, the water pipes outside our house froze for 3 weeks - they had apparently been installed at exactly the wrong depth in the ground at some stage - and we had to fetch bucketfuls of water from the next-door neighbours' house. Another time we had a snow day from school and I went sledging and fell off the sledge face-first and knocked my nose sideways. I think it was a few years after this that my mother and I woke up in the middle of the night and heard a lot of noise outside and the dog barking his head off. My father was away at a meeting in London, and after some discussion we both crept downstairs, my mother nipping into the front room to collect the poker on the way, prepared to confront intruders, only to find that the snow which had fallen a few days before had unexpectedly started to thaw and was sliding off the roof and landing on the path at the back of the house in a series of ominous thuds and bumps.
Then there was that day more recently when we were sent home from work early because the buses had stopped running, and I took a shortcut on the way and fell in a small snowdrift as I tried to climb up a bank to get to the old railway line path. Fortunately I have come to know my limitations a bit better these days. Later today I may be found negotiating my way along our street using the two sticks I kept after my hip operation, in a brave bid to find a pint of milk in one of the local shops. With a bit more forethought, I might have been able to train the cat to come and rescue me with a little barrel of brandy attached to his collar, but I'm afraid I will just have to crawl home if anything goes wrong.
Hasta luego!

Umberto Tosi said…
I love the snow, but hate the bother. We've had an unseasonably warm winter here in Chicago (known for fierce ones), with only a couple of short-lived snowfalls. I see where you on the other side of the pond are getting hit hard - a result, they say, of the massive warming patch over the North Pole, strangely. Ah, climate change. Anyway, thanks for the picturesque post. Good luck and stay warm and dry!
5 March 2018 at 00:31

Fran B said…
Your story of the snow on the roof thawing and thumping down reminded me of 2010. Our house is next to a big barn. The snow on its roof had been there for weeks and I guess we had stopped noticing. My husband went out and cleaned all the snow off his car which was parked in the lane between our house and the barn. A couple of hours later, he went back out and thought he was going mad. Muttering, 'I KNOW I cleared that snow off the car. I just KNOW it', he came back into the house. We were both mystified until we looked up and saw a snow-less barn roof.
5 March 2018 at 22:41