Crack Me Open: On Getting a Literary Education by Jane Thornley 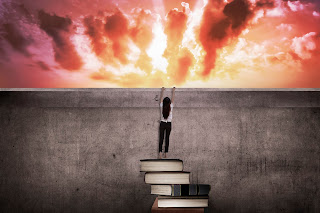 Nobody told me that receiving a good literary education was not the slow comfortable journey I expected so much as cracking myself open over and over again. I was nineteen.

I was required to climb monumental walls of my own preconceptions only to crash-land again and again on the other side. Everything was both more beautiful and more brutal than I could ever have imagined. And me, soft-shelled and Pollyanna-like, was not ready for the truth in all its variations.

In retrospect, I only recall the little moments that pushed me over the edge. Maybe those are the important ones, after all. Here's an example of a tiny shove: I walked into a classroom late one day and there stood my Irish Canadian professor reading a poem about the seal hunt. This wasn't one of those cute-fluffy-pups-how-dare-they-slaughter-them poems but a raw bloody tale of men striving to survive doing what they'd always done. I'm sorry to say that I don't recall the name of the poem or the poet but I remember my horror and pain. I can tell you that many men died on the ice floes of northern Labrador and that poem laid bare all the raw, bloody, and painful truth of human toil pitted simultaneously against nature.

My professor cried as though he'd lost a friend among those frozen souls while I found myself crying for the whole pathos of the situation. Even more importantly for my education, that day I watched a grown man cry over a poem. I didn't realize that men could weep openly let alone weep openly over poetry. Men only wept at funerals and hockey games, right? And surely no one read poetry after high school. I grew up as a farmer's daughter who's dad "made good" as a car salesman. No men read poems in our house let alone cried over one. But those words and the way that man read it caused something massive to shift inside me, not the least of which was my admiration for men who read poetry and wept.

So when the day came for another professor to ask each student to stand and read a line from Sylvia Plath's Berc-Plage, I was ready to crack open again. I read: "This is the sea, then, this great abeyance. How the sun's poultice draws on my inflammation." And she asked me why I emphasized where I did and in doing so taught me the weight of words. Words not only have meaning, but the reader participates in the emergence of that meaning while a speaker adds cadence and significance. The writer and the reader construct meaning together. We are a team. Suddenly, being a reader took on enormous importance, and I knew what I wanted to do for the rest of my life: to keep on reading, yes, but also to live in and with the written word.

For days, I'd recite that poem to myself, pealing back the layers of the world I thought I knew to test it against the one emerging. Now I began to understand what it meant to feel so vividly that it was like slicing your wrists against all the sharp edges of living. But pain was so wearing. Plath eventually committed suicide as did my next muse, Virginia Wolf, and really, I began to think that dying in that manner was all a bit too self-indulgent. Reading such angst caused me to turn away towards a brighter world view, though I continued to read widely and deeply from then on. For four more years, I penned poetry and read great literature. Eventually I fell in love with the novel and began writing them in secret at the rate of roughly one a year, each shoved into a drawer and buried.

I did not show my writing to a living soul. After all, my books were not great (serious) literature, they were genre. To me, genre was the equivalent of sludge. If I were ever to bump into one of my old professors, I doubt I'd even admit that I published at all. They'd expect something different of me, something literary, but studying Sylvia and Virginia taught me that it's all right to be entertaining because to be literary meant to be depressed. In fact, maybe genre writers live longer.

I've long since learned that one can write great literature without grinding down into sorrow but I am still content to entertain for the masses. I am a light-weight. Happy endings count for something, after all.

Bill Kirton said…
The 'literature/genre' divide has always baffled me, Jane. Well-written genre novels can move, excite, enthrall, entertain and, yes, instruct as well as many classics - especially the worthy but unreadable ones.

As for literature classes, I was always disappointed to hear students bleating the refrain 'Why do we have to spoil novels/poems by analysing them?'. Fortunately, they were usually in the minority, but They didn't seem to realise that contenting themselves with 'the story' was depriving them of altogether more satisfying experiences.
15 March 2018 at 16:00

Jane said…
I loved analyzing those works. That's how I began to understand. In fact, my written responses were deeply satisfying.

Umberto Tosi said…
Trying to write "literature" is a trap for me. I agree. But experiencing and understanding great literature opens my windows to worlds I would have missed - and well worth the work. Thank you for your thought-provoking post.
16 March 2018 at 07:16